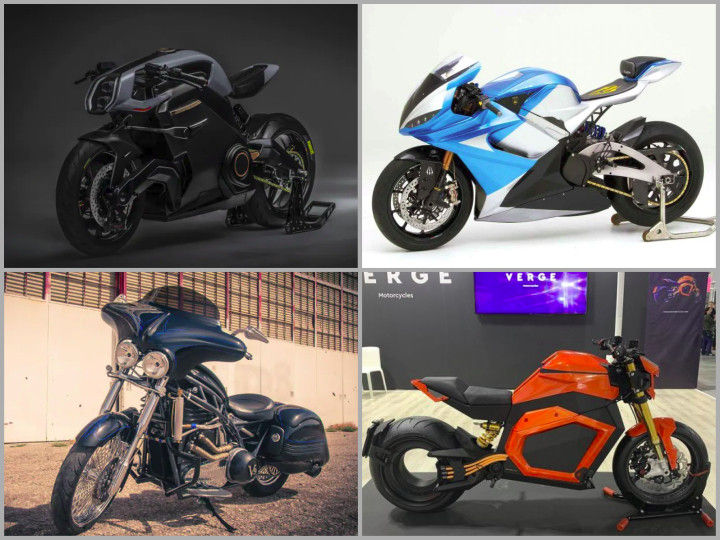 Gone are the days when electric vehicles were considered to be inferior to petrol-powered counterparts. The advancement of technology in the world of electric two-wheelers have made some of the bikes defy conventional wisdom and stand apart for their uniqueness. On this year’s World EV Day, we explore some of the most outrageous electric motorcycles to have graced modern history.

UK-based Arc Vehicle have created one of the most futuristic-looking electric motorcycles called the Vector. The British designers and engineers have left no stone unturned when it comes to the juicy specifications of this electric motorcycle. Top-spec underpinnings? Check. Carbonfibre chassis? Check. Lightning-quick charging? Check. Extreme range? Check.

The Arc Vector is capable of putting petrol-powered bikes to shame with a range of 436km on a single charge. What’s more, the battery pack sitting inside the full-carbon fibre monocoque chassis can be charged via a CCS DC (Combined Charging System, Direct Current) fast charger in just about 40 minutes. The 399-volt motor can help the bike reach a top speed of 200kmph and it can haul this 220kg mass from 0-100kmph in just 3.2 seconds.

The chassis is suspended on Ohlins TTX suspension on both ends, linked to carbon fibre swingarms at the front and rear. Yes, this electric motorcycle uses an hub center steering which is claimed to ensure additional stiffness, lower spring rates and offer reduced steering angle to give it phenomenal agility without making the ride harsh. Oh, and it also uses top-of-the-line Brembo Stylema calipers, gets fully bespoke colour options, seat and even the top panel. Of course, all these bleeding edge features and components command an eye-watering equivalent of Rs 82 lakh, and production is limited to just 399 units.

The Lightning LS-218 is an electric supersport made by Lightning Motorcycles from the USA. It might not look as lean and mean as the Panigales and the R1s but it does have the grunt to put many well-established litre-class track tamers to shame. With 150kW (203.94PS) on tap from the liquid-cooled permanent magnet motor, it is undoubtedly one of the most powerful production electric motorcycles in the world. Even its torque figure is a proper, cruiser-rivalling 227Nm.

Despite the shere figures, the LS-218 is claimed to have a healthy range of 160km when cruising down the highway. The top-end 380V, 20kWh battery pack ensures a combined range of around 250-290km per charge, which is mighty impressive. With electricity being cheaper than gasoline, it’s like owning a superbike but only needing to spend as much as running a conventional commuter motorcycle!

Again, it’s the Lightning LS-218. It holds the record of being the fastest production motorcycle (electric or petrol) with an insane MotoGP bike-rivalling 347.55kmph! At the Bonneville salt flats, the LS-218 did a best timed run of 351.86kmph. Check out the video to witness how this motorcycle laughs at the face of physics.

Of course, at USD 46,888 for the top-of-the-line 20kWh battery pack variant, the Lightning LS-218 isn’t cheap. But you simply can’t put a price on having the pinnacle of technology on two wheels, can you?

One thousand Newton Meters of tyre-shredding torque. That’s how much the hub-less Tron-like Verge TS makes. The Finnish electric startup showed the production version of the electric bike at EICMA 2019. The 80kW motor can propel the Verge TS from 0-100kmph in under four seconds, with a top speed restricted to 180kmph.

It also gets an equally mind-boggling range of 300km in the city and 200km on the highway from the large-capacity lithium-ion battery pack. Using fast-charging, one can top up the motorcycle in just about 45-50 minutes. While preorders are already open, production has been delayed thanks to the ongoing coronavirus pandemic. Priced at an equivalent of around Rs 21 lakh, the electric bike is quite expensive, though.

Imagine a Harley-like cruiser without the gas-guzzling V-twin. That’s exactly what the Brutus V9 from the USA is. Armed with a powerhouse of a 33.7kWh battery pack, it is said to provide a range of around 450km in the city and 337km on the highway!

Even the torque output is pretty impressive at 375Nm. That’s a lot more than even the torquiest Harley out there. Of course, having such a huge battery pack comes at the expense of weight. The Brutus V9 weighs about 401kg kerb. Thankfully, with a low seat height of 665mm, manoeuvring at low speeds shouldn’t be a problem for most riders. It is also as expensive as some of the bling-ey cruisers, with prices starting from around Rs 23 lakh.

Sun Sep 27 , 2020
This skateboard platform is totally drivable. Canoo You know Canoo, that upstart EV company that’s developing a lozenge-shaped rolling lounge? Well, on Friday, the California-based company showed off a running, driving example of its skateboard platform for the first time. This integrated architecture is the foundation of its future products, […]