Valentino Rossi said he believes changes are needed to the Red Bull Ring in order to avoid a repeat of the dramatic crash in Sunday’s Austrian MotoGP.


Two bikes were sent flying across the track after Johann Zarco’s Ducati collided with Franco Morbidelli’s Yamaha at full throttle, but both motorcycles narrowly missed the on-rushing Rossi and Maverick Viñales. Everyone involved somehow walked away from the incident.

© Moto GP
Work is underway to modify the track.


Seven-time MotoGP champion Rossi faced the media on Thursday, days after his miraculous escape from injury.

“For sure, when you have a small hairpin then you exit the opposite way and you arrive very, very fast, so this is very dangerous,” he told CNN during a media conference.

Rossi also confirmed he had seen a 2002 crash at the Austrian F1 Grand Prix, widely shared on social media this week, which bore a striking similarity to Sunday’s accident.


“I saw that crash in Formula One, I saw it before our incident, and it’s exactly the same,” he added.

Asked whether he believed a change to the track was likely, given that the F1 accident happened 18 years ago, he said he believed cost was a major obstacle.

“The problem is modifying the track is never easy, you need to make a big job to modify the layout of turn two and three in another way. It’s not impossible but we need to push a lot because it would cost a lot of money for the organizer,” he said.

READ: Will 2020 be Valentino Rossi’s final season in MotoGP?

Rossi admitted that he didn’t see Morbidelli’s Yamaha narrowly miss him during the incident.

“I saw just the bike of (Johann) Zarco flying over Maverick, but sincerely I didn’t see that of Franco Morbidelli because it was too close and too fast,” he told reporters.

“We were very lucky because neither bike touched us.”

With a radically altered calendar because of Covid-19, MotoGP returns to the Red Bull Ring this weekend for a second time.

Since last Sunday’s crash, MotoGP Race Direction has overseen modifications to the inside of turn three, where the incident occurred, in order to minimize the risk of a similar incident.

A new wall has been built to ensure nothing can run on and reenter the track. The wall has been constructed using FIA-approved fencing, tires and an air fence.

But the modifications are not without issue, and a more permanent solution to the corner presents complex problems for both MotoGP and F1, riders have warned.

“I was on the track today riding my bicycle, so I was able to see it firsthand,” LCR Honda’s Cal Crutchlow told Autosport on Thursday.

“It blocks your vision a little bit in the last part of the corner to tip in, but it’s safer than what we had last week in an extent [that] there was no barrier there, it stopped at a certain point where they’ve extended it as much as they can in in the safest way possible for this Grand Prix here.”

Part of the problem is the speed MotoGP bikes, capable of up to 400 kph, reach as they approach the corner. Zarco and Morbidelli’s bikes collided at around 300 kph on Sunday.

“I think we need to slow the speed down earlier, do something different, but one of the key things here is we cannot make the exit any faster,” Crutchlow continued.

“It’s a very difficult one, and I’m sure it will be discussed, and I think [MotoGP’s safety commission] understand, but it’s not as easy as just saying, ‘okay, let’s do this’.”

Johann Zarco was handed a penalty today for ‘irresponsible riding’, after MotoGP Race Direction reviewed Sunday’s crash. The Frenchman, who underwent surgery after fracturing his scaphoid in the accident, will start his next race — potentially this weekend — from the pit lane.

Alonso positive he can fight for the lead at Indy 500

Fri Aug 21 , 2020
The two-time Formula 1 world champion was only 23rd on the speed charts at the end of today’s two-hour session and will have to climb from 26th place on the grid, the middle of the ninth row, on Sunday. He said: “You always learn things. We had a couple of […] 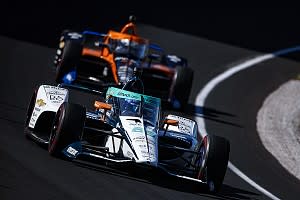