Average used car sale values increased in July at the three-year and 60,000-mile point – the first upward movement in the month since 2009 and followed an even stronger June.

Strong demand and a shortage of supply helped to drive the 0.4% increase, according to data experts at Cap HPI.

Average values at the one-year point stayed level and vehicles younger than this dropped very slightly. At all other ages, there has been a small, positive movement.

Cap HPI says there remains some pent-up demand in the market, with consumers wary of public transport keeping demand healthy.

Derren Martin, head of valuations UK at Cap HPI, explained: “We have witnessed a relatively dramatic increase during June, then a stabilisation in July and it would appear that values have peaked but are remaining at or around that level for now. As always, there are winners and losers within these averages.”

Some electric vehicles (EVs) and hybrids have struggled. Through lockdown there was some debate about the potential increase in demand for alternative-fuel vehicles as cleaner air became noticeable around larger cities, due to a reduction of vehicles on the roads.

However, in the short term, this has not been the case due to them still looking expensive versus internal combustion engine cars, says Cap HPI.

Despite their green credentials and running cost savings, feedback from the market has been that consumers currently find the premiums too expensive over a petrol or diesel vehicle, plus there are concerns over range still.

SUVs now sit at 27% of the used volumes up from 20% just two years ago, most of this being at the expense of upper-medium (D-sector) and MPVs.

Supply is high but so is demand and some notable upwards movement in prices has been reflected for the Audi Q2, BMW X1 and Land Rover Evoque, amongst others, reports Cap HPI.

Where demand has not been so strong, values have dropped for models such as the Citroen C5 Aircross, Hyundai Kona and Kia Niro.

Martin said: “Convertibles have certainly been in demand over the last few weeks.  In more normal times, trade values would have peaked in late-May or June and would now be heading south. During July, values have increased by 2.4%.

“The reasons for this can be put down to some pent-up demand, good weather, no excess supply and the previously mentioned dynamic of some consumers saving some money during lockdown, and now looking to buy a desirable or even an extra car as a toy.”

Older more affordable convertibles have increased in price the most in percentage terms, models such as the Audi A4 Convertible, the petrol variant of which has increased by a phenomenal 32% or £825 (at 10-years old) and the Audi TT Roadster, up around 11% or £1,000 at five-years-old.

Martin concluded: “Last month we predicted that July would be stable with no reason to expect a drop in values, but the large increases experienced in June were unlikely to continue. That is precisely what has happened.

“While there could be some very early signs of softening prices in August, we do forecast a relatively steady month, with possible drops to come from September onwards. When or if it comes, it is likely to be more acute for younger, higher value mainstream and premium cars.”

So, You Bought a Pair of Bike Shorts? Here Are 5 Ways to Wear Them

Wed Aug 5 , 2020
Bike shorts, they’re just like leggings…right? In theory, yes. They’re simply the cut-off versions of the athleisure you pretty much live in all winter long. But when it comes to actually figuring out how to wear them, well, you’ll quickly find that bike shorts are not quite as easy to […] 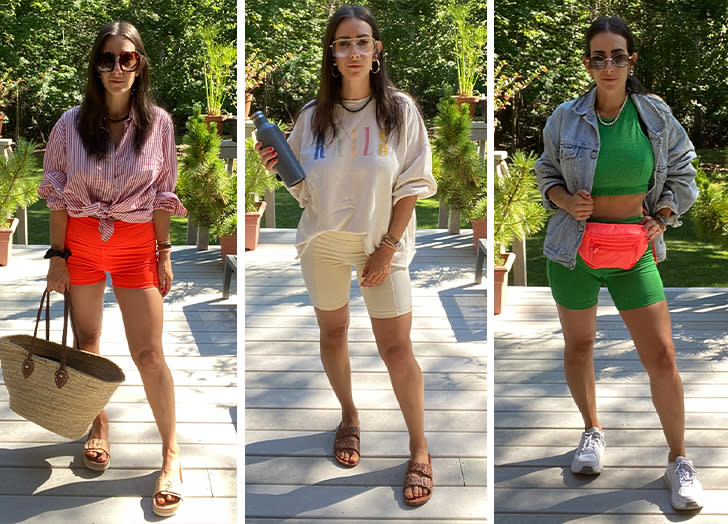