TOKYO — “One new generation, one new business” was the message drummed into Akio Toyoda as he grew up inside the family’s namesake company.

Now, at the age of 64, after a decade at the helm of Toyota Motor Corp., Akio Toyoda is following in that family tradition. He announced last week the creation of a business to develop all manner of automotive software, for everything from self-driving cars and on-board operating systems to high-tech mapping.

“Ever since I was born, I was always told, ‘One generation, one new business.’ That was the mission, the environment in which I was brought up,” Toyoda said in a recent media event here.

Toyota wants to become as good at designing bulletproof, user-friendly software as it has become at mass-producing reliable, high-quality cars. In a word, Toyota says it must change with the times and become a “software first” company after 83 years of obsessing over hardware.

“In the past, it was the quality, durability and reliability of Toyota’s vehicles on which people evaluated us,” Toyoda said during a small roundtable with select media. “The value of vehicles used to be generated by hardware. But nowadays, more value is created by software.”

Toyota’s gambit underscores the new reality that today’s cars, programmed with hundreds of millions of lines of code, are essentially rolling computers, or on-the-go software platforms.

Toyota plans to pursue that new reality through a trio of new companies:

All three will be led by James Kuffner, the American computer whiz who is currently CEO of Toyota’s automated driving development arm, Toyota Research Institute — Advanced Development, or TRI-AD.

Among the products that will be pursued by the Woven companies will be Arene, a new open automotive operating system that will allow for “programmable cars.” The companies will also work with partners on an Automated Mapping Platform, an open software system that allows companies to create the ultradetailed, high-precision maps needed for automated driving.

About 560 people work at TRI-AD, and the unit officially targets 1,000. Toyota hasn’t given a new figure but says it needs many more engineers than that to flesh out the Woven companies.

The Woven companies will be based in TRI-AD’s office in downtown Tokyo.

Kuffner was appointed a board member of Toyota Motor Corp. in June, highlighting the Japanese automaker’s urgency in breaking into the software sector. He joined Toyota only in 2016 after working on robotics and the self-driving car project at Google.

“Software is increasing in complexity and … importance in the industry. So what we have to do is be bold and invest now.”

Mon Aug 3 , 2020
British Touring Car Championship star Ash Sutton has hailed his new Infiniti Q50 as the best racing car he has driven after winning at last weekend’s Donington Park opening round. The 2017 champion has switched to the Laser Tools Racing squad for this year, using the Infiniti project developed by […] 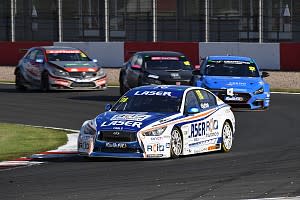