In quarantine, everything feels the same — mostly because it is. Weekends feel like weeks, rainy days aren’t all that different from sunny ones, and the news cycle is just as bad on Monday as it is on Friday, only with different words in the headlines. Once-regular visits your favorite restaurant or bar have become regular waits in the takeout line, leaving you to drink at home with cats who wish you’d just get out of their hair already.

But not all constants get old, even if the COVID-19 pandemic makes a real case for that argument. There’s a great exception to the rule right outside my window.

The 116-horsepower Mazda MX-5, known by many as the “Miata,” debuted in 1989 for the 1990 model year in the United States. From then on, it became defined by a few things: a low curb weight with a nearly perfect 50:50 weight distribution, a turning radius tighter than a new pair of shoes, and unflagging dedication to its marketing mission: “Horse and rider as one.”

When you’re in a Miata, you’re not driving in a car. You’re driving with it.

The 1990 roadster was neither fast nor extravagant. Its impracticality could be a pain, unless you enjoyed stacking groceries in the passenger seat when they overflowed its small trunk space.

It didn’t have to be any of those things to be an instant classic — the kind of car you respect, the kind of car that will always tempt you to buy it over anything else.

The Miata has undergone a variety of changes over the years, as cars do. Its second generation debuted in 1997 for the 1999 model year, boasting a far higher 140 horsepower. When 2004 rolled around, Mazda brought in the special edition Mazdaspeed Miata with a factory turbocharger and 178 horsepower. The third generation was introduced in 2005 with 170 horsepower, while the current car came onto the market in 2016 with new, aggressive looks yet a less aggressive 155 horsepower. Mazda upped that figure to 181 horsepower for the 2019 model year onward.

But the changes, power and otherwise, never changed what the Miata was and is: a Miata.

It was only a few weeks after my spouse and I traded a large stack of $100 bills for a 2004 Mazdaspeed Miata ourselves that the 2020 Miata Club I was scheduled to review showed up outside, wearing a hypnotizing red paint that put our Mazdaspeed’s old, sun-faded red to shame. It was enough to put any red to shame.

The $36,300 Miata Club had plenty of extra options, including that $595 paint and a nearly $4,500 Brembo BBS Recaro package, which fitted it with new black wheels, bright-red Brembo brakes, and heated Recaro seats instead of the cloth ones found on the regular Club. (If you aren’t familiar with Brembo and Recaro, all you need to know is that they make you look like a Very Serious Driver. Brands are good at forging those connotations, you know.)

As soon as I slid into the driver’s seat of the Club — “slid” being a far too gracious term for how anyone gets into a vehicle as small as the Miata, which starts with a crouch and ends in a plop — it felt like time had stopped, in a good way. I’d just been in our 2004 car with a humble 130,000 miles on the odometer, but the 2020 version, which had been driven a mere 1,900 miles, felt like the same car. While 16 years of development in the outside world would feel like 16 centuries, in the Miata, it felt like no time at all.

In many cars, that would be a gross insult. In a Miata, it’s the highest of compliments.

My mother indoctrinated me into the ways of the Miata from a young age. Ever since I can remember, she has had a “toy car” in the garage, specifically an MX-5. She brought home her first one in 2002, and her garage hasn’t been without one since. She tried to teach me how to drive stick on the black 1996 model she bought with 22,000 miles on the clock, preaching the good word about how learning to drive on a car with a manual transmission was the best favor anyone on the road could do for themselves.

After killing the car a few times in a parking lot in my early teens while trying to lurch that poor thing into first gear, I decided that her mantra was, in fact, a web of brainwashed lies. I promptly stormed away and determined that I would be an automatic fan for life, only to return a few years later to face my own shortcomings and actually learn how a clutch pedal worked.

It was worth it, because that car wasn’t about showing anyone up, in performance or in style. It was just about having fun — if you could get it into first gear.

But even before I knew how to drive the little black one, I got to enjoy riding around in the passenger seat while we put that turning radius to use in our cul-de-sac, making circle after circle until we either got dizzy or saw someone driving down toward us.

Once they got out of our way, we were back at it again.

Mom went through a few Miatas — the black 1996, a white-on-brown 2008 model from the Miata’s third generation, and a black-on-black 2017 version — all with manual transmissions. With each new ride, only a few things changed: The leather got a little fresher, the pedals a little tighter, the maintenance schedule a little more spread out, and Mom’s excitement was a little more renewed. But the car and its driving dynamics remained the same, because if Mazda has learned anything over the past three decades, it’s that nothing about the Miata truly needs to change. Even the horns sound the same, decades apart.

It’s no wonder a 2004 model was the first car my spouse and I bought together. Family history or not, it’s a hard car to pass up.

The perpetual nature of the Miata isn’t something you actively think about, mainly because it’s easy to take for granted, and it didn’t hit me again until I stepped out of our old Mazdaspeed and into the new one. Going from one driver’s seat to the other was almost like not changing cars at all, just as moving from one of Mom’s Miatas to the next was simply a matter of a tweaked aesthetic.

The 2020 Miata Club was, like any other Miata, a riot: On the first night it arrived, my husband and I were out on the curviest roads in our general vicinity — of which there aren’t many — feeling the car flow with the asphalt like water through a stream, appreciating the regimented, almost robotic feeling of a shifter that had only been thrown around for 1,900 miles, and the tight nature of a steering wheel that hadn’t quite been broken in yet. It was bliss, as all Miatas tend to be.

Sure, the red accent stitching in some Miata models feels sportier than the gray stitching in the Club I spent the week with. And sure, the Miata’s modern interior design makes it impossible for a passenger to use the volume and tune knobs. They sit right under the driver’s forearm instead of alongside the infotainment screen, and that forearm doesn’t really move, due to the shifting and all.

The leather bolsters on the Recaro seats will wear and wrinkle over time, too, all while currently making the car a lot more cramped than older versions whose bolsters have already broken down — squeezing a driver’s thighs tighter than that cocktail dress that hasn’t been worn since February. The flimsy modern design of the cupholders would make anyone reconsider stopping for a fountain drink, and any Miata with a dark interior is going to feel like the surface of the sun after sitting outside for more than 10 minutes.

The Miata remains nothing fancy. For $36,300 in the year 2020, you still have to adjust your own seat. No power controls to be seen here.

But in the Miata, none of that matters. What matters is that in the year 2020, you can get virtually the same wonderful car that came onto the market in 1989 — simply adapted for modern comfort and design.

And in a world that never ceases to drive home how mundane consistency can be, sometimes that Miata — any Miata — is a nice reminder of what’s possible when a good thing stays the same.

Wed Jul 29 , 2020
This week in 1973 Roger Williamson was killed amid terrible scenes during the Dutch Grand Prix. At the end of the previous season, in which he had won two F3 titles, Williamson spoke to IAN PHILLIPS for the 14 December 1972 issue of Autosport magazine. At the age of 24, […] 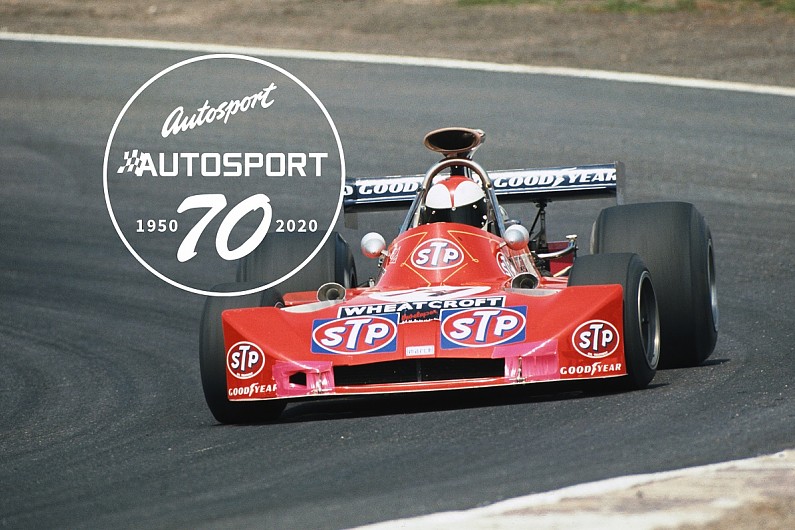