There’s something about racing games that just works on Nintendo Switch. Whether it’s because you can drive a car while in a car or just that you can tilt your Switch back and forth like a steering wheel, we don’t know. Regardless, the genre is a staple of Nintendo’s handheld. From obvious entries like Mario Kart 8 Deluxe to hidden gems like Gotcha Racing 2nd, here are the best racing games for the Nintendo Switch.

The game that needs no introduction, Mario Kart 8 Deluxe has sold the most copies out of any game on Switch, and it’s not even close. Super Smash Bros. Ultimate tails by around 6 million units, while Breath of the Wild and Super Mario Odyssey are an additional million behind. Put simply, Mario Kart 8 Deluxe is a must-own on Switch. The Mario Kart franchise basically founded the mascot-based kart racer, and the revamped eighth entry in the series is among the best.

And it’s not just Mario Kart 8 with all of the DLC packed in. Although Deluxe is, more or less, a direct port of the Wii U version with additional DLC included, there are some changes. You can carry two items in Deluxe over the one you can carry in the base game, Battle Mode is more reminiscent of previous versions as opposed to whatever was bundled in the base game, and most everything is unlocked from the moment you pop in the cartridge. Like many first-party titles on Switch, Mario Kart 8 Deluxe doesn’t just feel like the best Mario Kart game on Switch, but a defining entry for the entire series.

Fast RMX is a cheap Switch game, which alone is enough for a recommendation given the dreaded Switch tax. It just so happens that Fast RMX is a great racing game, too. Launching alongside the switch in March 2017, Fast RMX is a follow-up to Fast Racing Neo, a fast-paced, futuristic racer inspired by F-Zero that released on Wii U in 2015. Like a lot of Wii U games, though, Neo didn’t sell well, despite essentially being a modern F-Zero.

It seems like a tale as old as time at this point, but Fast RMX gave the series a new life on Switch. It’s a racer with futuristic cars, sure, but the thrill of RMX comes from speed. The game is much less about racing to the finish line and much more about taming the beast you’re piloting. Plus, the game is a beautiful showcase of how good the Switch can look when a developer is focused solely on it.

Take your character in Dead Cells, suit them up with some leather, throw them on the back of a motorcycle, and you basically have Road Redemption. The setup is this: After a motorcycle-based assassin whacks the boss of a wealthy weapons cartel, the cartel puts together a bounty for the killer’s head. With a common goal, every killer with a bike is looking to score, and although some will help you along your journey, most just want to get you out of the way.

Road Redemption combines rogue-like elements into combat racing, creating a viscerally satisfying and infinitely replayable gameplay loop. The core of the game is racing along a road, using bats, swords, pipes, and whatever else you can find to take out your opponents. However, the process of upgrading your character and bike after a failed run is what keeps Road Redemption interesting. Plus, like Fast RMX, Road Redemption is cheap, so there’s no reason not to pick it up.

GRIP looks an awful lot like Fast RMX, and considering how good the latter looks, that’s a good thing. The two games share a lot of elements, in fact. GRIP is a futuristic racer where you can hit speeds nearing 800 miles per hour. On top of that, though, you can race on walls and ceilings, and you can blow your opponents to bits with a variety of different weapons.

Unlike other combat racers, GRIP is a shooter first, racer second. Although the gameplay is based around, well, racing, the fun comes from upgrading and customizing your vehicle so it’s as deadly as possible on the track. The game even encroaches on Trials territory, with nearly 20 aptly named Carkour courses, where your race to the finish line is based around obstacles, not other racers. Unlike most other games on this list, GRIP does a little bit of everything.

Trials Rising counts as a racing game, right? Technically, you’re racing on motorcycles with other opponents, though the game quality devolves into some cruel joke reminiscent of Getting Over It with Bennett Foddy. Unlike most other racing games, simply making it to the finish line is a feat in itself in Trials Rising. With countless obstacles and a physics system that always seems like it’s working against you, it’s a game that demands you try and try again. Failing is part of the process.

That process couldn’t be more fun, though. Frustrating as Trials Rising can be, the game never takes itself too seriously, gleefully flinging you across arenas and into Evel Knievel-esque death traps. There’s a surprising amount of depth in Rising, too. The Trials series has always been known for a long list of collectibles and expertly hidden Easter eggs, so although you can get through the game in under 20 hours, mastering it will take dozens more.

Horizon Chase Turbo is arcade racing bliss. Heavily inspired by arcade machines from the ’80s and ’90s, Horizon Chase Turbo is all about getting back to basics. You drive a fast car around a track and try to beat everyone else, no messing about with guns or banana peels. The vibe of the game is right, too, with Barry Leitch at the helm of the soundtrack. Leitch also worked on games like Top Gear and Rush.

The game isn’t trying to be anything it’s not, and that’s why we love it. Instead of going in a realistic direction — par for the course with racing games — Horizon Chase Turbo uses a blocky aesthetic reminiscent of 16-bit era racers. Although simple, the visuals are stunning, with bright colors and a full weather system. They complement the Switch perfectly, too, favoring performance over the muddy “HD” textures seen in countless other Switch ports.

Crash Team Racing Nitro-Fueled is a remake of the beloved PlayStation classic, finally ported to a Nintendo console. Although seeing Crash barreling forward on a Switch is a little weird, Nitro-Fueled is a perfect companion for the hybrid console. For the most part, it’s just Crash Team Racing with a fresh coat of paint and refined mechanics. You can use the same characters, engage in the same game modes, and race on the same tracks as the 1999 release.

“Nitro-Fueled” isn’t just a catchy tagline, though. In addition to the base tracks and karts, Nitro-Fueled comes with everything from Crash Nitro Kart, too. Although Nitro-Fueled does very little to further the mascot-based kart-racing genre, it does everything it should well. Like Mario Kart 8 Deluxe, Nitro-Fueled is the definitive entry for the Crash Racing series.

Time for a different perspective, literally. Gotcha Racing 2nd isn’t an obvious choice for a racer, but it’s a great one. Although the game looks like nothing more than a simple, fun top-down racer, it actually comes from Arc System Works, the same studio behind the Double Dragon and Guilty Gear series, as well as games like Dragon Ball FighterZ. Gotcha Racing 2nd is a top-down racer with some interesting courses and tight mechanics. The fun comes from customizing your vehicle, though.

The game, fittingly, has a gacha system where you spend in-game currency to purchase new items. Unlike free-to-play mobile games, though, you don’t need to give Gotcha Racing 2nd a direct line to your credit card. There are almost 700 parts in the game, and you can earn them simply by playing, no microtransactions. Without the threat of an overdrawn balance, Gotcha Racing 2nd shows how effective gacha games are in keeping players engaged, and with a bargain-bin price tag, there’s no reason not to give it a shot.

With everything from character mascots in karts to blowing away your foes with vehicle-mounted rocket launchers, it only seems fitting to end our list with a good old-fashioned racing game. GRID Autosport is all about cars, speed, and graphics, which is a perfect combination for the genre. No matter if you want to race a dragster on a proper race track or take a souped-up sedan out on the city streets, Autosport has something for you.

It’s a mobile game, though, which we tried to avoid for this list (you have a Switch, after all, and might as well take advantage of it). Thankfully, Autosport is a great mobile game, and it runs even better on Switch. Published by Codemasters — the same studio behind the Dirt and F1 series — GRID Autosport is an authentic, big-box racer that fits in your pocket. The game looks and runs shockingly well on Switch, too, which is always great to see.

Tue Aug 4 , 2020
Romain Grosjean thinks it’s “unacceptable” that top Formula 1 drivers like Lewis Hamilton are earning more than $40 million per year while some of his rivals are on much less. With F1 considering some form of salary cap in the future as part of ongoing cost cut measures, the idea […] 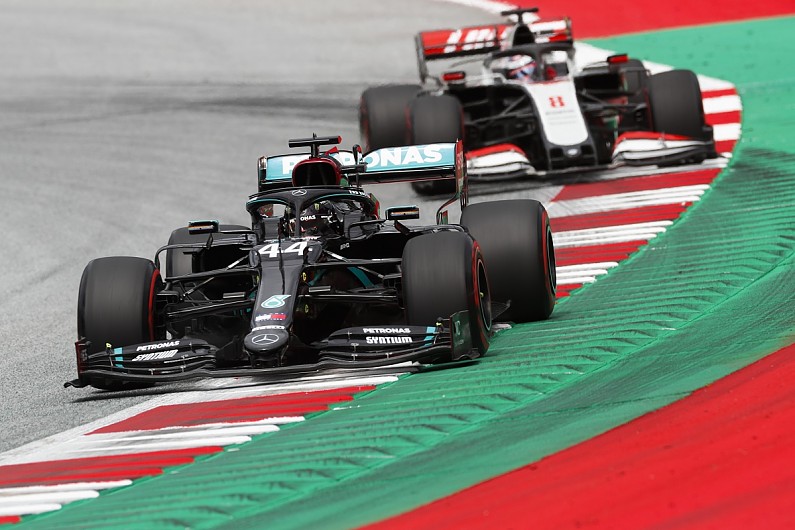