Hard as it may be for some to believe, 1990 was some 30 years ago now, and the cars we know and love from that decade have become, simply, classic. Look back at the era’s production models and you’ll see an evolutionary period, where straight lines largely gave way to more curvaceous shapes; nostalgia for classics of the 1950s and ’60s was heightened, and new “retro” designs were all the rage; and new technology in the form of early single-clutch paddle-shift transmissions and electronic stability-control systems helped to usher in a rethink of how enthusiasts could experience vehicle performance. But production cars weren’t the only things changing; the ’90s wrought some of the most amazing concept cars ever created. Today, we take a look at 10 of our favorite ’90s concept cars all these years later to see how well they stand the test of time.

Now that a production mid-engine Corvette is finally here with the C8, it’s fun to look back on the numerous times Chevrolet studied the feasibility of creating such a car. The Corvette CERV III (Chevrolet Engineering Research Vehicle) was first shown at the 1990 Detroit auto show, and it came equipped with such advancements as all-wheel drive, four-wheel steering, and active suspension, the latter similar to the day’s Formula 1 race cars. A six-speed automatic gearbox ran through a turbocharged Corvette ZR1 5.7-liter V-8 engine, and scissor-style doors gave an even more exotic feel to the wild carbon-fiber and Kevlar bodywork. Production ready? Not quite. We had to wait nearly two more decades for a true mid-engine Corvette.

Before there was the Audi R8, there was the 1991 Audi Avus quattro concept car. Another ’90s concept-car style exercise influenced by heritage models, the Avus took its name from a Berlin highway, long and straight, which hosted not just public traffic but also a number of auto races.

Comprised of two long straights joined by tight hairpin curves at each end, AVUS (Automobil-Verkhers-und-Ubengsstrabe, or Automobile traffic and training road), was also closed by various manufacturers to conduct high-speed tests in the early-mid 1900s. Audi’s aluminum-bodied Auto Union racers had history there in the 1930s, and the Avus concept car featured bulging wheel arches and a shiny aluminum-like finish to pay homage to these world-beating machines. The Avus was designed to accept the VW Group’s W-12 engine Audi was at the time developing for its own models, and it led the way toward the R8’s introduction many years later, in 2006.

Talk about a ’90s concept car you want to jump in and take for a drive, the Ferrari Conciso was an (unfortunately) one-off project by designer Bernd Michalak using running gear from a Ferrari 328 which incidentally, by 1993 had been replaced with the controversial 348 production car. The Conciso looks nothing like the 328, of course, but features its 3.2-liter V-8 engine and chassis under the spartan, taut, and aerodynamic-looking aluminum bodywork.

The triangular side duct is a sharper, more futuristic take on the traditional Ferrari styling feature, and the chopped-down windscreen and no-nonsense interior makes us think of classic 1950s Ferrari sports racers. Take a closer look at this ’90s concept car, and you’ll see little bits and pieces of the 328 in the Conciso, like the taillights, gauges, and gated, dogleg five-speed. This concept car last sold at RM Sotheby’s Monaco auction for approximately $150,000.

Porsche was struggling in the early 1990s; manufacturing costs were sky high while sales dwindled as the Porsche 911—then still air-cooled and thought by some to be hopelessly outdated—soldiered on. Meanwhile, Porsche’s entry-level, front-engine, water-cooled 968 coupe and convertible, a final evolution of the 924 which debuted in the mid-1970s, was coming to the end of its lifecycle. Porsche needed a fresh perspective to get back in the black, and it came with the pivotal, stunning Boxster concept car.

Unashamedly backward looking in its design, the Boxster was designed to replace the 968 with a new mid-engine roadster layout and styling that harkened back to the svelte, mid-engine 550 Spyder of the 1950s. Finally, after years of tie-ins with Volkswagen and Audi for its most affordable models, this was an all-Porsche design with a flat-six engine based on that of the 911.

When it debuted at the 1993 Detroit Auto Show (Porsche obviously emphasizing the outsized role of the U.S. market in its future product plans), the Boxster concept car was the belle of the ball and everyone wanted to take her home. Unfortunately, we’d have to wait four more years for the chance; the production car was finally released for the 1997 model year. To this day, some members of the Autombile staff insist the original Boxster was easily the best ’90s concept car of all, and perhaps even of all time.

Foreign automakers weren’t the only ones contracting retro fever; American car companies like Chrysler were fully sick with it as well. The Chrysler Atlantic is one of several fantastic retro-inspired ’90s concept cars the Pentastar debuted through the decade, and some of us think it’s the most sensational.

Transparently summoning the classic Bugatti Type 57 Atlantique of the 1930s—a period widely known as the automobile’s “golden age” of design, free of the shackles of passenger- or pedestrian-safety standards—the Chrysler Atlantic was elegant, swoopy, and absolutely breathtaking to behold with its 128-inch wheelbase and sculptural shape. Under the hood was a straight-eight engine made from twin Dodge Neon mills producing some 360 horsepower. It didn’t take an industry insider to tell you there was no way such a car would ever come to market, but it didn’t matter. This tribute to Art Deco design was a love letter to the automobile from then Chrysler chief Bob Lutz and design head Tom Gale.

A whole decade before Ford began deliveries of its new mid-engine Ford GT supercar in 2005, but nearly 30 years after the GT40’s first outright win at Le Mans, the Ford GT90 concept addressed the question of what a contemporary GT40 might look like. At the 1995 Detroit auto show, the GT90 looked revolutionary.

There are no soft, flowing curves here; no real effort to remake a classic as the later GT was. Instead, besides the doors that ate into the roof as the original GT40’s did, the GT90 was a completely fresh take and almost seemed inspired by contemporary computer-aided designs and video games.

Indeed, the car would feature in several of the decade’s driving-simulation games, where fans could virtually experience the GT90’s quad-turbo, 6.0-liter V-12 engine and Jaguar XJ220-based chassis. Top speed was said to be 253 mph. In the end, of course, Ford built only one GT90, and though it was scheduled to come up for auction with RM Sotheby’s in 2009 (while Ford was hobbled financially by the Great Recession), the car was withdrawn from sale at the last minute. We presume this exceptional ’90s concept car still resides with Ford somewhere in its warehouses.

Though the Mazda Miata didn’t look overtly retro in its design when it launched in 1989, its design and engineering teams were heavily influenced by popular roadsters of years past, especially the Lotus Elan.

The fact the Miata was a convertible and not a coupe undoubtedly played a huge part in its romanticism and sales success, with those who grew up with old English drop-top sports cars in the ’50s and ’60s looking forward to revisiting that fun in their middle age with a modern, reliable reboot of a classic front-engine, rear-drive formula. Nevertheless, even the classic Elan had a fixed-roof variant and Mazda investigated adding a coupe to the Miata range with the M Coupe concept.

Borrowing styling cues from the gorgeous third-generation Mazda RX-7, it’s likely no coincidence the rotary-powered sports car’s discontinuation in the U.S. market a year earlier played into the decision to explore a new closed coupe. While this ’90s concept car was fully drivable, it was a rough job under its shiny yellow paint, with a heavy fiberglass roof rushed to its debut at the 1996 New York auto show. Ultimately, Mazda execs said no thanks to the idea, knowing convertibles drew more customers. The concept’s fans, Automobile magazine included, mourned. Yet, the car still exists in Mazda’s Irvine, Calif., basement collection.

Ford and its Cosworth performance division were building engines for the open-wheel Championship Auto Racing Teams (CART) Indy-car series in the 1990s (later consolidated into IndyCar), and they thought a concept car that borrowed from open-wheel racing design would help to bridge the gap between race car and road car in consumers’ minds.

The Ford Indigo was developed with help from CART chassis manufacturer Reynard, and it debuted on the 1996 auto show circuit. The engine was a 6.0-liter V-12 crafted from two Ford Duratec V-6 mills, and the chassis, similar to a contemporary CART racer, was a carbon-fiber monocoque with advanced pushrod suspension. The concept captured everyone’s imagination, even if a production version was never to be, and the developmental V-12 engine went on to power several Aston Martin models while Ford owned the English luxury brand.

Today, Ford tuner and NASCAR team owner Jack Roush keeps the single drivable concept in his Michigan collection, while another stationary styling car (or two, depending upon who you ask) lives with another collector.

By 1997, Porsche’s Boxster production car had launched, Mercedes-Benz was building its SLK roadster, and BMW’s Z3 was also hot on the market. Dodge had its high-powered, high-cost Viper for hairy-chested macho men, but what about a smaller, more nimble and, most importantly, more affordable roadster for the masses? That was the Dodge Copperhead concept, when it was shown to the public for the first time at the 1997 Detroit auto show.

Styling was reminiscent of the Viper, but under the hood there was no V-10 behemoth. Instead a 220-hp, 2.7-liter V-6 was mated to a five-speed manual gearbox, a combination that provided a competitive starting point against the German roadster trio, while the chassis was a modified Viper platform. The Copperhead was approved for production at one point, before the bean counters chickened out, leaving American performance enthusiasts to wonder what could have been.

By the mid-1990s, Fiat was in full control of its recent acquisition, storied Italian brand Alfa Romeo. But the cars it was producing were getting further and further from Alfa tradition, with new front-wheel-drive chassis and more inclusion of Fiat parts-bin materials.

Based on a front-wheel-drive 164 sedan chassis (the last Alfa Romeo sedan to be sold in the U.S. prior to today’s new Giulia), the configuration was switched to a mid-engine, all-wheel-drive layout similar to the V-10 powered Alfa 164 Procar racer. While the Scighera didn’t get that V-10 for itself, it did get the next best thing: a twin-turbo, 3.0-liter “Busso” V-6 generating some 400 hp. The Scighera’s aluminum and carbon-fiber construction was exotic, with a traditional Alfa grille up front and aerodynamic considerations from then-current Formula 1 learnings. Italdesign spent some effort to do a small production run, then shifted to building a handful of race cars. Unfortunately, neither project was ultimately produced.

Sun Sep 6 , 2020
Shane van Gisbergen doubled up in the second Townsville SuperSprint by converting a 12th place starting spot into victory in the third heat, having earlier won race two. The Triple Eight driver, who secured the team’s 200th Supercars victory in the first of Sunday’s two 39 lap races, set the […] 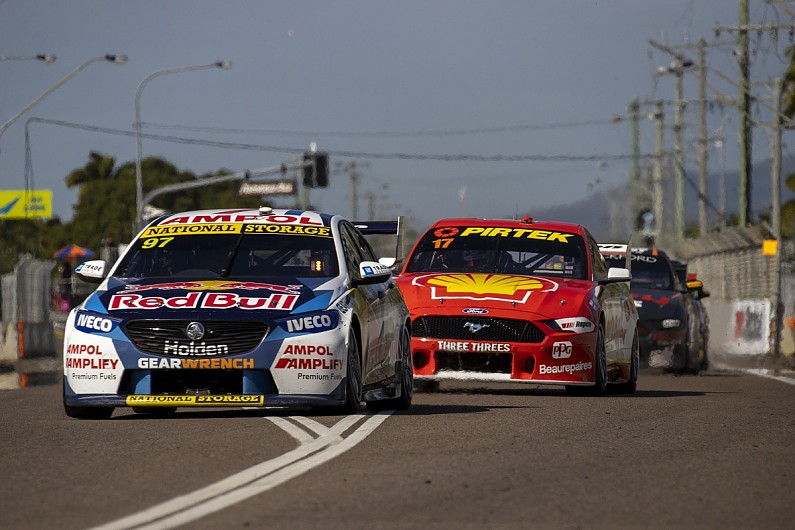