Prior to the final pit stops, Dixon had dominated the day in his Chip Ganassi Racing Honda, leading a race-high 111 laps as the championship leader sought his own second Indy victory.  Starting in the middle of the front row in the 33-car field, Dixon took the lead at the Green Flag and went on to control much of the 200-lap contest, especially after Alexander Rossi, in a strong running Andretti Autosport Honda, crashed out of the race on Lap 143.  Prior to his contact with the wall, Rossi led four times for a total of 17 laps as he and Dixon edged away from the field in the middle portion of the race.

But both Rahal Letterman Lanigan Hondas came on strong in the closing laps, with Sato’s teammate Graham Rahal closing the gap to the lead pair in the final laps to finish third.  After a disappointing qualifying effort, Santino Ferrucci conducted an exciting late-race effort of his own, finishing fourth to complete a Honda 1-2-3-4 sweep at the finish.

Honda drivers claimed eight of the top-10 finishing positions, with James Hinchcliffe recovering from a clutch problem encountered in his second pit stop to finish seventh, with his Andretti Autosport teammate Colton Herta eighth.  Jack Harvey had his best Indy finish to date with a ninth-place result for Meyer Shank Racing; while Ryan Hunter-Reay rounded out the top 10 in his Andretti Autosport Honda.

Honda Racing social media content and videos from this weekend’s pair of races 104th running of the Indianapolis 500 will be available on Facebook (https://www.facebook.com/HondaRacingHPD) and on Twitter at  (https://twitter.com/HondaRacing_HPD).  Produced by the CoForce Digital Media, YouTube video packages can be found at: https://www.youtube.com/HondaRacingHPDTV.

QuotesTakuma Sato (Rahal Letterman Lanigan Racing Honda) Started 3rd, finished 1st; second Indy 500 win; 13th victory for Honda at Indianapolis: “I think we had the best car. Only we were a lap short from Dixie [Scott Dixon] in terms of the fuel strategy, and [making fuel mileage to the finish] was a little tight. I couldn’t use max power to switch back and forth. And Dixon kept coming through Turn 4 [on the final green flag lap] and I was just able to hold him off. This is unbelievable. Everyone did a hell of a job. HPD and Honda gave us a lot of power and a lot of fuel mileage.”

Scott Dixon (Chip Ganassi Racing Honda) Started 2nd, finished 2nd; led race-high 111 laps; increased his mid-season championship points lead to 84 over Josef Newgarden [335-251]: “This is a hard one to swallow. On fuel mileage, I really can’t see how [Takuma] Sato was going to make it [prior to the caution that ended the race]. We pitted a lap later, and the [fuel mileage] numbers they had to get, it was going to be very difficult. I thought they were going to throw a red flag [following a late-race crash by Spencer Pigot], which would have been interesting for the last four or five laps. Huge congrats to Takuma. He drove his pants off today. Rahal Letterman Lanigan, they were super fast, obviously finishing first and third. It was good day for Honda. I want to give a massive thank you to them. We’re very proud to be powered by HPD and Honda, and it’s nice to get some [championship] points. But it’s hard when the win slips away like that.”

Santino Ferrucci (Dale Coyne Racing with Vasser-Sullivan Honda) Started 19th, finished 4th: “It was just an incredible race. The SealMaster Honda was insane today. The guys worked really hard on pit lane, on the timing stand and the strategy was perfect.  I’m just really happy, after two incredibly long weeks of focusing on the car, we ended really good. During the first pit stop I got caught in neutral, and it was like a blessing in disguise. It set us way back, but the momentum we had just carried us. On the next restart [after a caution flag] we went from 25th right back into the top-10. It was where we needed to be and we just fought our way from there into the top-four.”

Ted Klaus (President, Honda Performance Development) on today’s Indianapolis 500: “This was a very satisfying win.  On behalf of every HPD team member and everyone back at HPD in Santa Clarita – who have all been pushing hard since last year’s race – thank you!  Congratulations to Takuma Sato, Graham Rahal and the entire Rahal Letterman Lanigan team for their one-three finish today; to Scott Dixon and Chip Ganassi Racing for his dominant run to lead 111 laps and second-place result; and to all of our partner teams and their great drivers.  Together we led all but 22 laps of today’s race, and scored an incredible 13th ‘500’ win for Honda.”

Mon Aug 24 , 2020
It was a case of smiles all around the Honda camp following the 104th Running of the Indianapolis 500 at the Indianapolis Motor Speedway on Sunday. Too bad the vendors, dealers and other usual guests of the manufacturer at the Greatest Spectacle in Racing weren’t able to celebrate in the […] 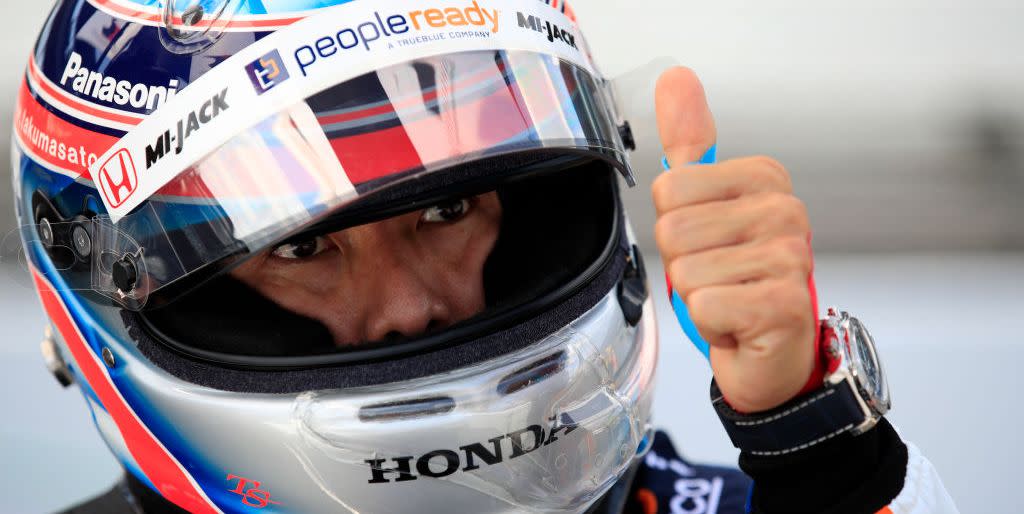