Oliver Rowland reckons he could have passed the DS Techeetahs “at any point” to win the fourth Berlin Formula E race “apart from when the team asked me to”.

The Nissan e.dams driver ran in third behind eventual winner Jean-Eric Vergne and newly crowned champion Antonio Felix da Costa for the bulk of the E-Prix.

But Rowland reckoned he could have overtaken at any time, although chose not to having expected the DS Techeetah car – which also claimed the teams’ title – to be faster.

He said: “In hindsight, I could have passed them at any point in the race apart from when the team asked me to.

“So, that’s a bit disappointing.

“I was comfortable behind them for the majority of the race.

“They have been so dominant that I was sat there thinking ‘I shouldn’t waste my energy to fight them because they’re going to be faster’.

“In the end they weren’t so maybe I could have done the race a little bit differently.

“It puts us in a slightly different frame of mind going into the last two races.

“We can race them and we can fight them.”

Rowland set an identical lap time to Vergne in group qualifying but was deposed by da Costa in superpole to start the race in third place, alongside team-mate Buemi.

When Buemi amassed a 1% useable energy advantage in the final third, Nissan swapped the drivers around. 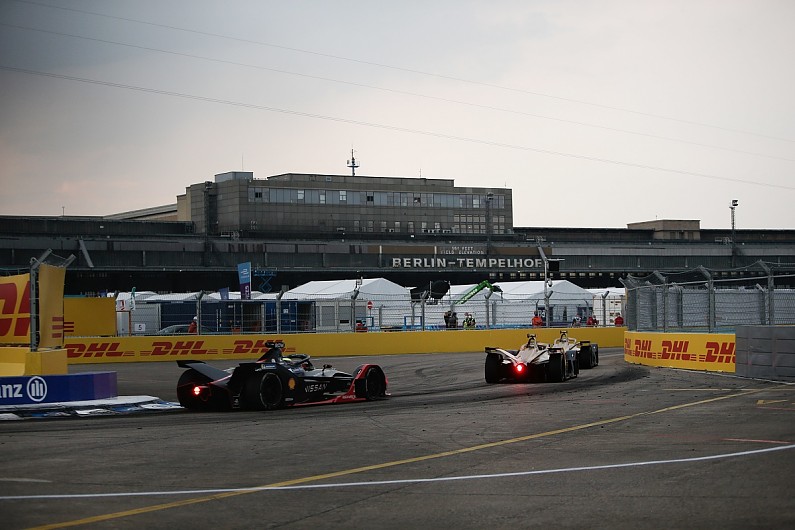 Buemi ran deep into Turn 6 as they changed over, which delayed the pair and left Rowland prey to Mercedes driver Nyck de Vries.

On the final lap, de Vries past Rowland up the inside of the same corner to score fifth.

Rowland said he purposely did not challenge for position in an effort to consolidate points, adding that he expected a team orders scenario to come into play.

“We knew before the race that there could be the chance, starting right next to each other, that one would have to take the lead and the other one could save [energy],” he said.

“Of course, it was a bit disappointing to get passed by de Vries on the last lap but if I’m honest, I put that down to my own error.

“He tried a bit of a banzai move and it worked.

“Obviously I wanted to score points for the team, so I didn’t want to crash with him.”

Buemi added that he too was surprised by his ability to stick close to the DS Techeetahs, saying: “I was expecting them to fly away, I guess, but they didn’t.

“Ollie was actually more confident than me that we could follow them – I was not so confident.

“It’s the first time we do a race like that, properly behind each other.

“We’ve learned lots of things and I’m sure if this [team orders] happens in the future we’ll be more ready to give [DS Techeetah] a run for the money.”

Sun Aug 9 , 2020
DETROIT – Cadillac is diving into the world of electric cars with its debut of the LYRIQ show car, a full electric luxury crossover vehicle. “Led by LYRIQ, Cadillac will redefine American luxury over the next decade with a new portfolio of transformative EVs,” said Steve Carlisle, executive vice president […]