Rossi had been trading the lead with Ganassi’s Scott Dixon, as they proved to be the class of the field out front, but a dropped wheelnut on his right-rear corner during a pitstop meant he was late leaving his pits, and he banged wheels with Sato as he exited his pit.

The resulting penalty assessed by IndyCar stewards meant Rossi had to battle back from the rear of the field and was making good progress until he lost control at Turn 2 on Lap 144 while running 17th and slammed the wall.

“We were never planning on being that far back,” said Rossi. “We just lost it, there’s a lot of dirty air back there and it was tough in Turn 2 all day. The problem was, the #27 NAPA Andretti Honda was awesome, I thought we had a car to win, and I don’t even want to talk about the penalty right now, I’m going to have to have a long conversation with somebody about that.”

Rossi was then shown a replay of the pit lane incident with Sato by NBC, and when asked what he thought replied: “Obviously I can’t see anything, I just go on when I’m told, but Takuma has been moving in reaction at restarts and doesn’t get a penalty, so consistency is… we’ll talk about it.

“I don’t have an opinion right now, it’s obviously frustrating and there’s two sides to every story.”

Sun Aug 23 , 2020
Takuma Sato won his second Indianapolis 500 after a huge late accident for Spencer Pigot brought about an early end to the 104th running of the race. Sato, who also won in 2017 for Andretti Autosport, was leading with five laps of the scheduled 200 left to run, fighting through […] 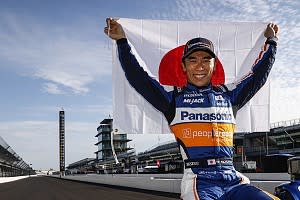