An analysis from the Beacon Hill Institute (BHI) details how the Transportation and Climate Initiative (TCI), a cap-and-trade scheme, would harm Massachusetts residents, especially low-income individuals, in a misguided attempt to decrease global temperatures by an amount so miniscule as to be environmentally meaningless.

TCI, promoted by the Georgetown Climate Center, is based on California’s cap-and-trade program and the Regional Greenhouse Gas Initiative (RGGI) consortium of states in New England and the Northeast, which Massachusetts is already a party to. The purpose of TCI is to reduce carbon dioxide (CO2) emissions from cars and trucks to head off climate change. It does this by placing a cap on gasoline and diesel fuel allowed for sale in the states participating in the program. This increases the price at the pump for these fuels, which will most adversely impact hard-working residents of the Bay State.

Gradually, the amount of these fuels allowed for sale is reduced while wholesalers would have to purchase CO2 allowances to stay in business. TCI is scheduled to be operational by 2022, and to reduce CO2 emissions from transportation fuels by 25 percent by 2032, although member states can seek to exceed those goals.

Despite claims from supporters, cap-and-trade programs like RGGI and TCI do little to reduce carbon dioxide emissions. Even worse, they are regressive taxes. Cap-and-trade programs disproportionally burden low-income households, many of whom can’t afford the higher energy and gasoline costs these programs are designed to produce. The more someone pays at the pump means the less they can afford to save or use for food, rent, mortgage payments, utility bills, etc.

According to the BHI analysis, commissioned by the Fiscal Alliance Foundation, to meet that 25 percent reduction goal, gasoline prices in Massachusetts could increase by 25 cents per gallon, while diesel prices could increase by 52 cents per gallon. Further, every family in Massachusetts would see what amounts to a $738 tax increase, while more than 9,600 private sector jobs throughout the commonwealth would likely be eliminated. Further, meeting TCI’s 25 percent emissions reductions goal would only actually reduce greenhouse gas emissions by a barely-measurable 0.0009 percent.

“The cost associated with TCI is magnitudes larger than previously reported. For the first time, we now know how many private sector jobs would be lost, and the increase in taxes it would cost every Massachusetts family,” said Paul D. Craney, a spokesman for the Fiscal Alliance Foundation.

These costs and low emissions reductions are not unique to TCI. A Manhattan Institute study estimates the California cap-and-trade program raised residential electricity costs by as much as $540 million in 2013. California’s Legislative Analyst’s Office (LAO) estimates cap-and-trade will increase gasoline prices by 15–63 cents per gallon by 2021, and by 24–73 cents per gallon by 2031. LAO projects Californians will spend an additional $2 billion to $8 billion on gasoline by 2021. It also estimates the increased gasoline prices will cost $150–$550 per household by 2026. Retail electricity prices in the Golden State are also 53 percent higher than the national average. Prior to the enaction of its cap-and-trade program, they were only 40 percent higher.

Another estimate of the program, completed in 2017 by the California Energy Commission, found gasoline prices have already increased by 12 cents a gallon, with diesel prices increasing by 14 cents a gallon.

In a Cato Journal article released in 2018, David T. Stevenson of Delaware’s Caesar Rodney Institute writes there are “no added reductions in carbon dioxide emissions, or associated health benefits, from the RGGI program. RGGI emission reductions are consistent with national trend changes caused by new EPA power plant regulations and lower natural gas prices. The comparison requires adjusting for increases in the amount of power imported by the RGGI states, reduced economic growth in RGGI states, and loss of energy intensive industries in the RGGI states from high electric rates.”

Bay State lawmakers should work to ensure Massachusetts stays away from TCI, which would cause considerable economic harm to all commonwealth residents, especially those low-income residents, while having a minimal effect on carbon dioxide emissions.

The Transportation Climate Initiative: Its Economic Impacts on Massachusetts
https://d3n8a8pro7vhmx.cloudfront.net/fiscalalliancefoundation/pages/41/attachments/original/1583851240/3.10.2020_BHI_and_FAF_Study_on_TCI.pdf?1583851240
This analysis from the Beacon Hill Institute finds meeting the goals of the Transportation Climate Initiative would raise gasoline prices in Massachusetts up to 26 cents a gallon in 2022, with diesel costs shooting up 52 cents per gallon. TCI would also raise taxes on each Bay State family by $738 and eliminate over 9,600 jobs. These economic costs, the analysis finds, would be purposeless, as emission reductions from the program would be barely measurable.

A Review of the Regional Green Gas Initiative
https://object.cato.org/sites/cato.org/files/serials/files/cato-journal/2018/2/cato-journal-v38n1-chapter-11.pdf
This Cato Journal article authored by David T. Stevenson of the Caesar Rodney Institute finds the Regional Greenhouse Gas Initiative has not shown any added emissions reductions or associated health benefits, has had minimal impact on energy efficiency and low-income fuel assistance, and has increased regional electric bills.

Legislating Energy Poverty: A Case Study of How California’s and New York’s Climate Change Policies Are Increasing Energy Costs and Hurting the Economy
https://www.pacificresearch.org/wp-content/uploads/2018/12/LegislatingEnergy_F_Web.pdf
This analysis from Wayne Winegarden of the Pacific Research Institute shows the big government approach to fighting climate change taken by California and New York hits working class and minority communities the hardest. The paper reviews the impact of global warming policies adopted in California and New York, such as unrealistic renewable energy goals, strict low carbon fuel standards, and costly subsidies for buying higher-priced electric cars and installing solar panels. The report finds that, collectively, these expensive and burdensome policies are dramatically increasing the energy burdens of their respective state residents.

Five Myths of Cap-and-Trade
https://www.heartland.org/publications-resources/publications/five-myths-of-cap-and-trade
Articles supporting cap-and-trade programs rest on a number of fallacies. In this article by Todd Myers of the Washington Policy Center, Myers identifies and explores five persistent myths concerning cap-and-trade, including the belief that a cap on carbon dioxide emissions guarantees emissions reduction.

The U.S. Leads the World in Clean Air: The Case for Environmental Optimism
https://files.texaspolicy.com/uploads/2018/11/27165514/2018-11-RR-US-Leads-the-World-in-Clean-Air-ACEE-White.pdf
This paper from the Texas Public Policy Foundation examines how the United States achieved robust economic growth while dramatically reducing emissions of air pollutants. The paper states that these achievements should be celebrated as a public policy success story, but instead the prevailing narrative among political and environmental leaders is one of environmental decline that can only be reversed with a more stringent regulatory approach. Instead, the paper urges for the data to be considered and applied to the narrative.

Climate Change Reconsidered II: Fossil Fuels – Summary for Policymakers
https://www.heartland.org/publications-resources/publications/climate-change-reconsidered-ii-fossil-fuels—summary-for-policymakers
In this fifth volume of the Climate Change Reconsidered series, 117 scientists, economists, and other experts assess the costs and benefits of the use of fossil fuels by reviewing scientific and economic literature on organic chemistry, climate science, public health, economic history, human security, and theoretical studies based on integrated assessment models (IAMs) and cost-benefit analysis (CBA).

The Social Benefits of Fossil Fuels
https://www.heartland.org/publications-resources/publications/the-social-benefits-of-fossil-fuels
This Heartland Policy Brief by Joseph Bast and Peter Ferrara documents the many benefits from the historic and still ongoing use of fossil fuels. Fossil fuels are lifting billions of people out of poverty, reducing all the negative effects of poverty on human health, and vastly improving human well-being and safety by powering labor-saving and life-protecting technologies, such as air conditioning, modern medicine, and cars and trucks. They are dramatically increasing the quantity of food humans produce and improving the reliability of the food supply, directly benefiting human health. Further, fossil fuel emissions are possibly contributing to a “Greening of the Earth,” benefiting all the plants and wildlife on the planet.

Nothing in this Research & Commentary is intended to influence the passage of legislation, and it does not necessarily represent the views of The Heartland Institute. For further information on this subject, visit Environment & Climate News, The Heartland Institute’s website, and PolicyBot, Heartland’s free online research database.

The Heartland Institute can send an expert to your state to testify or brief your caucus; host an event in your state; or send you further information on a topic. Please don’t hesitate to contact us if we can be of assistance! If you have any questions or comments, contact Heartland’s Government Relations department, at [email protected] or 312/377-4000.

Wed Aug 19 , 2020
The U.S. Navy’s Virginia Class fast attack submarines are ruthlessly efficient war machines, the apex predators of the deep. Yet their general appearance and many aspects of their design have a direct lineage back to the 1950s. The same can be said of British and Russian subs. However, a range […] 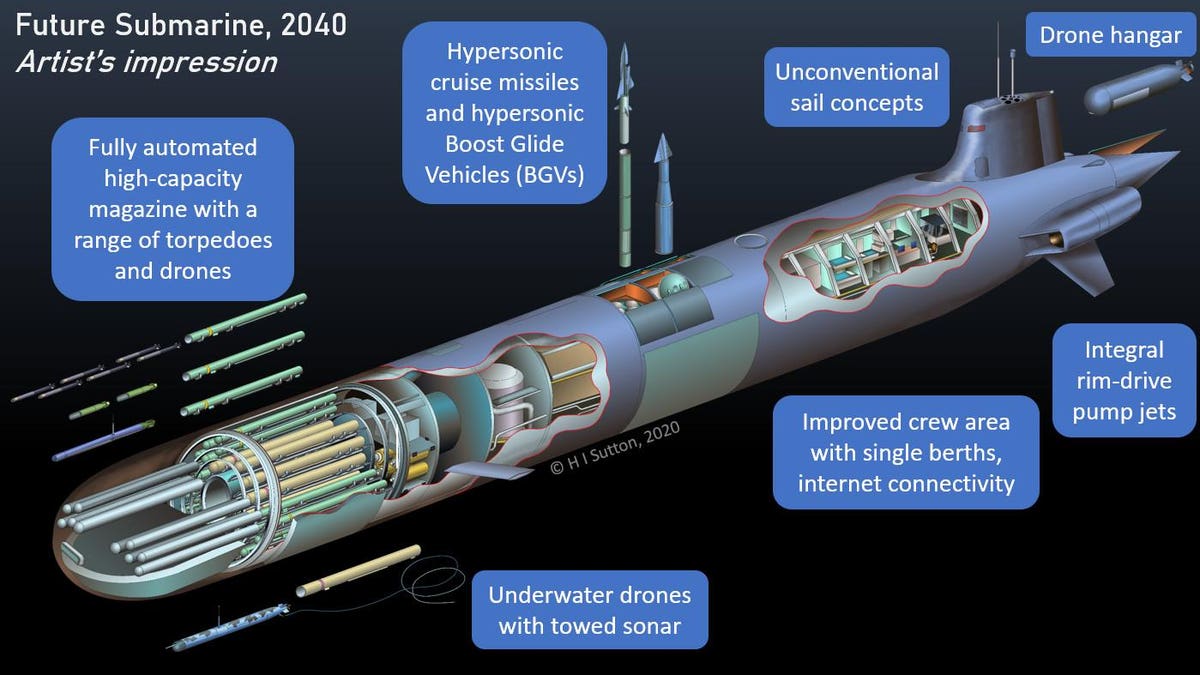