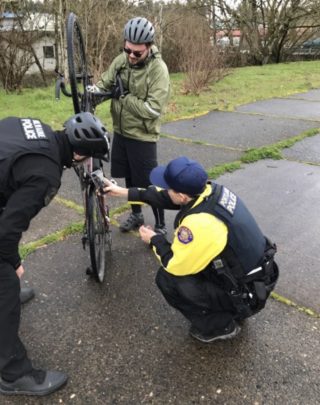 Bike thieves do not care about the pandemic. In fact, it’s probably encouraging them to steal more.

The BTTF was launched five years ago this week. We haven’t reduced bike theft as much as we’d hoped, but the task force itself remains strong and is doing excellent work. While Portland is a leader in bike theft with about 10,000 bikes stolen each year (over one per hour), we are also a leader in recoveries. According to PPB data, they’ve recovered 30% more bikes so far this year than last. That’s $100,000 worth of stolen bikes back in the hands of their owners. The key? Registration.

“We could solve bike theft overnight if everyone would take a few minutes today to walk out to their garage and register their bikes,” Ofcr. Sanders shared with me this week.

Sanders is on the frontlines of the bike theft epidemic. As he scours the city looking for stolen bikes, he’s also been a victim himself. It happened back in January and it just happened again last week.[Read more…]

Sat Apr 11 , 2020
After several models of simple bicycles and velocipedes, a true revolution in bicycle history happened during early 1860s. Two French carriage makers Pierre Michaux and Pierre Lallement improved design of then popular “daisy horse” and added mechanical crank drive with pedals on it. That moment is considered today as the […]