Rising star Devlin DeFrancesco will start on pole position for today’s Indy Pro 2000 Oval Challenge of St. Louis Presented by Cooper Tires. In preparation for only his second ever race on an oval, the 20-year-old Italian-Canadian from Toronto, Ont., this afternoon was the only driver to turn two laps of the unique, egg-shaped 1.25-mile World Wide Technology Raceway under 32 seconds.

After brief showers earlier the day interrupted some of the three 45-minute test sessions, the sun was shining brightly when the drivers each embarked on their two-lap qualifying runs in reverse order of their current championship positions.

As the Indy Pro 2000 Championship Presented by Cooper Tires points leader, DeFrancesco was the last to make his qualifying attempt. He was up to the challenge. Despite posting only the fourth fastest time in practice, DeFrancesco turned his two fastest laps of the day to claim the Cooper Tires Pole Award with a two-lap average of 141.231 mph.

“This is my first time here, so we ran through quite a few things today,” said DeFrancesco. “The morning was about getting up to speed, which I think we did quite quickly. We focused on longer runs and only did one qualifying simulation and I got blocked by traffic. But it was enough to know that we were in good shape. When Frost put that first lap in, I thought ‘that will be tough to beat but if he pushes any more it will be over the limit’ and he did. But I think we had a great balance and a great car. The Andretti guys really know their stuff on ovals – they know their stuff everywhere, but on ovals they really are masters. I can’t thank them enough. We look good for tomorrow.”

Petrov, who arrived for the sixth race of the season as the only man to have two wins to his credit, maintained his strong start by qualifying on the outside of the front row, just over two-tenths of a second quicker than Robb.

“I’m really happy with how the car handled with only two laps to get it right,” said Petrov. “The team gave me a great car, we worked hard all day on the balance and we were right there in every session. Now we need to make sure we have a good race car. The championship leaders are all together so it will be important to get a good start and get to the front.”

After setting the pace in practice, Turn 3 Motorsport’s Danial Frost, from Singapore, posted the fastest single lap of qualifying, 31.7017 seconds, but a huge slide in Turn Two on his second lap cost him valuable momentum. Instead he will start fourth.

“The first two laps were pretty good,” said Frost. “We had a lot of pace but I just turned a bit too late (in Turn One) and over cooked it. I only have myself to blame. The team did a great job getting the car there. I just have to redeem it tomorrow and get the win for them, that’s the most important thing right now. At least we’re not starting so far back, but I’m still disappointed not to get that pole position; we had a ridiculous amount of speed. We’ll go to our race car setup so it can last long and be quick at the end of the race. I just have to focus on getting to the front in the early laps.”

The Pabst Racing pair of Hunter McElrea, from New Zealand, and Colin Kaminsky, from Homer Glen, Ill., will line up next in the starting order, with Mexico’s Moises de la Vara rounding out the top 10 for DEForce Racing.

After a final 20-minute warmup at 9:15 a.m. CDT on Saturday, the 55-lap race will start at 1:00 p.m., immediately preceding the first of this weekend’s pair of NTT INDYCAR SERIES races.

Both practice and race will be live streamed worldwide on the Road to Indy TV App, at RoadToIndy.TV and the series website, indypro2000.com.

Sat Aug 29 , 2020
Nobuharu Matsushita pulled off a strategy masterclass in the FIA Formula 2 feature race at the Barcelona circuit to score an unlikely victory after starting only 18th. The Japanese driver bolted for a second set of soft tyres during a safety car period to climb 14 places before then passing […] 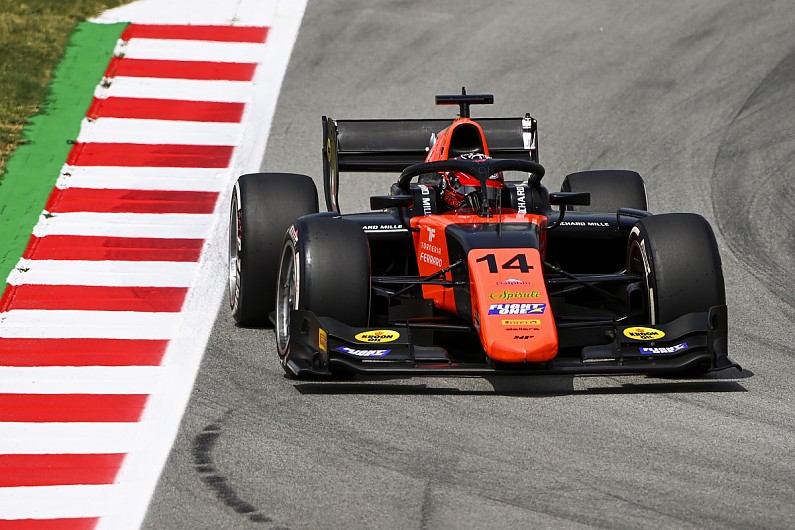