Nissan has long been a leader in electric vehicle sales, despite really only having one EV — the functional-if-uninspiring Nissan Leaf hatchback — on the market. That changed today with the introduction of a new mid-sized SUV with up to 300 miles of range called the Ariya.

First unveiled last year as a concept, the Ariya is scheduled to go on sale in Japan in mid-2021, followed by the US and Canada later in the year. Pricing will start around $40,000, which is only a few thousand dollars more than the current average selling price of a vehicle in the US. Buyers of Nissan’s electric and hybrid vehicles are still eligible for the full $7,500 federal tax credit and various state incentives, which depending on where people live could help reduce the cost by up to $10,000 in the US.

The Ariya was unveiled against the backdrop of corporate turmoil, executive turnover, plummeting sales, and pandemic-related cost-cutting at Nissan. The arrest and subsequent escape of Carlos Ghosn, former chairman of the Nissan-Renault-Mitsubishi alliance, dominated the headlines for much of 2019, casting a spotlight on an automaker that appeared to be at war with itself.

As such, the Ariya is the first major new product launch in the post-Ghosn era for the company — and a chance to turn over a new leaf (pun intended). Nissan says the new electric crossover serves as a “key milestone” in the company’s four-year plan “to achieve sustainable growth, financial stability and profitability.”

But enough corporate intrigue; let’s get into the specs.

The Nissan Ariya’s drivetrain is what really differentiates it from the Leaf. Rather than opt for a simple front-wheel-drive arrangement, the Ariya will come in multiple configurations, including a two-wheel-drive version and a twin electric motor setup that will enable all-wheel drive performance, which Nissan is calling the “e-4ORCE” (because everything needs a ridiculous and confusing brand name).

“I’m not afraid to say this is probably the most technologically advanced car that Nissan has made in its history,” Nissan Senior Vice President Ivan Espinosa told reporters on Tuesday. “So we’re putting all of our resources and know-how behind this car.”

Espinosa said Nissan took what it learned from the GT-R sports car’s torque-split system and applied it to the development of the Ariya’s twin motor setup, including the vehicle’s motion, speed, and road handling.

There will also be two battery sizes to choose from — a 63 kWh battery and a 87 kWh one. Nissan claims the two-wheel-drive version will be able to achieve up to 300 miles of driving range, though the automaker has yet to make the Ariya available to the US Environmental Protection Agency or the European Union’s Worldwide Harmonised Light Vehicle Test Procedure (WLTP) for independent verification.

That said, the 2020 Nissan LEAF SL Plus has an EPA-rated range of 215 miles per charge, so presumably it wouldn’t be too much of a stretch for the automaker’s battery supplier, China’s Automotive Energy Supply Corporation, to bump that up to 300 miles.

Nissan isn’t revealing the amount of time it takes to charge the Ariya. EV charging time can be a sticking point for potential buyers, especially for those vehicles that take longer than 15-20 minutes to reach 80 percent capacity. This will be the spec to look out for as Nissan gets closer to production.

Nissan is empowering the Ariya with the newest version of the automaker’s advanced driver assistance system, ProPilot Assist 2.0. The original ProPilot was a Level 2 partially automated system, which allowed the vehicle to control speed, distance from other cars, and keeping the car in the intended lane with minimal input from the driver. Cameras detect lane markings at highway speeds, and then adaptive cruise control, lane-keep, and blind spot detection systems keep you in that lane until you deliberately change lanes.

With the Ariya, ProPilot Assist is getting an active driver monitoring system to enable hands-free driving on highways. Nissan first announced its plans to upgrade ProPilot Assist to allow for hands-free driving last year. The only other automaker to offer a similar system right now is GM’s Super Cruise. Ford has said it would introduce its own hands-free system with the electric Mustang Mach-E, which will go on sale in the second half of 2021.

Previously, Nissan had included ProPilot Assist in the the Leaf, top-selling Rogue SUV, and the sub-$30,000 Altima. With the addition of the Ariya, Nissan has established itself as a leader of offering partially automated driving in affordable, mass-market vehicles.

The Ariya looks much sportier then Nissan’s other crossover, the Rogue, thanks to a low, wide stance. And the vehicle lacks a lot of the sharp, angular lines seen on many of the Japanese automaker’s vehicles, opting for a softer, more family-friendly appearance. Despite being tech-forward as it comes, the Ariya lacks many of the idiosyncratic (and slightly ridiculous) flourishes that Nissan likes to stuff into its concept vehicles, like a virtual assistant that’s also a koi fish, or a fake engine noise that sounds like a musical version of THX’s Deep Note.

Still, it’s an EV, so it has to have ultra-thin headlights a la EV startups like Byton and Faraday Future, and brake lights that stretch across the rear like Tesla’s Cybertruck. And the solid faux grille probably won’t be as divisive as the Ford Mustang Mach-E, though it may still deter some buyers looking for something more familiar-feeling.

This is not an over-designed car; if anything, it’s exceedingly normal looking, which for an EV can be a relief. Most EV designs tend to lean too heavily on the automaker’s idea of “the future,” but can come off as ham-fisted. The Ariya’s wheels certainly stand out, but nothing else about this vehicle screams “electric,” which can help lure potential buyers who are weighing whether to make the switch from a gas-powered vehicle.

The photos Nissan shared with media outlets show off the vehicle in a copper paint tone, but Alfonso Albaisa, senior vice president for global design, said the Ariya would come in “candy red,” “deep blue,” and a number of other color schemes.

Inside the vehicle there are two 12.3-inch horizontal screens, one behind the steering column and the other in the center of the dash. The screens aren’t floating above the dash like Tesla’s Model 3 and Model Y, but are oriented in a wave-like shape that seems like it would be easy to reach and operate.

Not everything is controlled via these two screens. The car’s HVAC system can be accessed via a set of capacitive haptic switches that are integrated into the wood paneling underneath the center screen that offer a similar feeling to mechanical switches by vibrating when touched.

There’s an abundance of legroom, which is typical of a car without an internal combustion engine. That said, it’s a family vehicle designed to fit five people. “It’s really a very unique sensation that you have when you sit in the car,” Espinosa said.

The Ariya comes with Apple CarPlay and Android Auto wireless connectivity. And it will be Nissan’s first model to include over-the-air firmware updates to upgrade the car’s infotainment system, electric and electronic architecture, chassis, climate system, and EV settings.

Car dealers are generally wary of OTA updates for fear of being cut out of the lucrative service and maintenance process. Basically, if you can fix your car with an OTA update, you don’t need to take it in to the dealership as often, and that means less money for them. But car buyers seem to like them, insofar as it reminds them of their smartphone’s constantly updating operating systems.

It’s a tough moment for automakers, especially as they attempt to resume production that was paused by the coronavirus, and are now confronted with surging infection rates in many parts of the US. Nissan has had to shutter its facilities and furlough employees in response to the crisis.

Against that backdrop, automakers are still struggling to sell EVs, especially in the US where gas is selling for a little more than $2 a gallon. The tax credit helps to soften the blow for many consumers, but Nissan will soon become ineligible as it approaches 200,000 EVs sold in the US. After that, the credit begins to phase out and the value proposition on a $40,000 vehicle that takes an unknown amount of time to charge and can’t travel as far on a single charge as a Tesla begins to dwindle.

Luckily, Nissan has a lot of experience selling EVs that it can apply to the Ariya. And with its unique motor configuration and normal-but-far-from-boring design, it stands as good a chance at success as the Leaf — if not more so.

Fri Aug 7 , 2020
(MENAFN – Khaleej Times) Sebastian Vettel has warned Formula One to be prepared for unpredictable, cold and challenging weather when the circus travels to Germany’s “Siberia” in October.The coronavirus-hit 2020 season’s revised calendar has scheduled the Eifel Grand Prix for October 11, marking the Nurburgring circuit’s first return to the […] 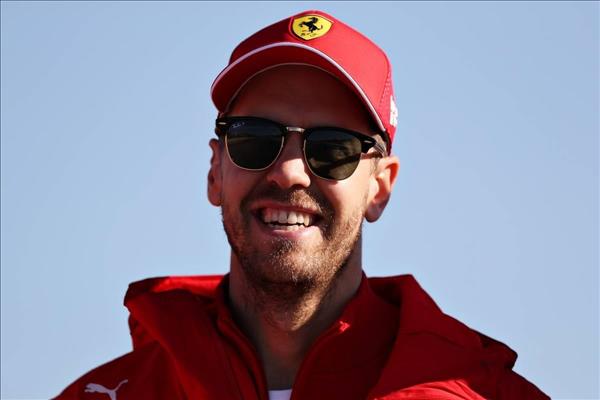