After an embarrassing 20min delay caused by the track sweeper leaking oil over the track, the cars got rolling with Dario Franchitti driving the Honda two-seater, and former MLB outfielder for the St. Louis Cardinals Kerry Robinson as his passenger. There were six laps under yellow to help blast any excess oil-dry away, but two of these laps were counted as part of the 200.

As Sato came up to lap Ed Carpenter at the tail of the field on Lap 25, he was briefly stuck behind him and that inevitably allowed Newgarden and Power to close up. In fact it was Power who took most advantage, drafting past Newgarden and into second on Lap 36, and briefly hassled Sato –enough so to prompt Saturday’s runner-up to make a more concerted effort to get around Carpenter.

Carpenter’s teammate VeeKay and Hunter-Reay made their first stops on Lap 42, with Ericsson, Alexander Rossi stopping on Lap 47. That triggered several stops including O’Ward who stopped two laps before Power and jumped ahead of the Penske driver. VeeKay’s very early stop allowed him to file in behind Power and ahead of Newgarden.

Sato turned his fastest lap of the race on Lap 58, then pitted on Lap 59 but it couldn’t make up for the time he had lost behind Charlie Kimball’s AJ Foyt Racing-Chevy prior to that. He emerged in eighth.

So now the order was O’Ward, half a second ahead of Power with VeeKay and Newgarden in hot pursuit, and Dixon running 1.2sec behind Newgarden in fifth, ahead of Herta, Rosenqvist, Sato, Ericsson and Conor Daly’s Carlin-Chevy.

The second stops were started by Daly, Rosenqvist, Hunter-Reay, Alex Palou, on Lap 94. VeeKay ducked out of third on Lap 95, with O’Ward stopping on Lap 96. That allowed Power into the lead for a lap before he stopped – as did Dixon – and handed P1 to Newgarden. O’Ward’s out-lap was slightly compromised by Ferrucci, and that allowed Power to emerge from the pits ahead of the Arrow McLaren SP driver and VeeKay. O’Ward and VeeKay were then split by Newgarden who stopped on Lap 102.

Power was thus fifth, behind the late-stopping Sato, Herta, Marco Andretti and Kimball. Sato stopped on Lap 109 and emerged ahead of Dixon, but Herta delayed his stop until Lap 113 and jumped the pair of them.

Power thus led with O’Ward 0.4sec behind, Newgarden a further 1.4sec in arrears and about a second clear of VeeKay, with Herta fifth. Five seconds behind ran Sato, Dixon, Daly, Rosenqvist and Ericsson completing the Top 10. However, Ericsson made a third stop on Lap 131 with a loose rear wing.

Power had caught up with a long crocodile of cars on Lap 128 but O’Ward never really looked like cutting past, the pair of them apparently saving fuel.

Harvey, Rossi and Andretti made their final stops as soon as the pit window opened. Dixon and Sato stopped on Lap 148. O’Ward and Newgarden came in on Lap 151 and they raced each other out of pitlane, Newgarden fractionally ahead. Power stopped on Lap 152 but he got held up in traffic, and then by the struggling Carpenter as he came into the pits, and that was enough for him to drop to third behind Newgarden and O’Ward.

Herta ran long and with less fuel needed, his stop was swift and jumped him into fourth ahead of VeeKay, Dixon and Sato. However, VeeKay closed down the Andretti driver, passed him around the outside, and Herta drifted up into the gray and oil-dry. His wild fishtailing moment allowed Dixon through into fifth.

Mon Aug 31 , 2020
Reigning IndyCar champion Josef Newgarden recorded his second victory of season for Team Penske under caution in the second race of the double-header at Gateway. Newgarden gained the lead from team-mate Will Power through the third and final pitstop cycle on lap 152 after the Australian was briefly held up […] 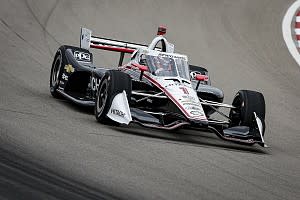