Kevin Harvick fended off an attack from Brad Keselowski in overtime to seal victory in the first race of the NASCAR Cup Series double-header at Michigan.

Harvick’s Stewart-Haas Racing machine was dominant throughout the eventual 161-lap encounter around the 2.0-mile Michigan oval, scooping all three stages in his Ford Mustang after a flurry of late caution and red flag periods.

After a routine first 85 laps encompassing stages one and two, a series of three separate cautions for John-Hunter Nemechek spinning with tyre issues closed the pack up, the final such caution coming on lap 131.

After the final caution for the #38 of Nemechek, there was just a four-lap green-flag run until lap 143 when Ryan Preece got loose and slapped the wall.

This restart lasted but a lap and ended with Chase Elliott being gifted the lead after the leading quartet all opted to take the high-line, leaving the fifth-placed Hendrick Chevrolet Camaro entry on the front-row.

A Cole Custer wreck swiftly bought about the abort of the restart.

A further late caution – the fifth of the race (not counting stage breaks or competition caution) after contact between Austin Dillon and Ryan Newman sent the race to overtime – with Harvick leading and Keselowski alongside after Elliott opted to take the high-line to fill in behind the Mustang. 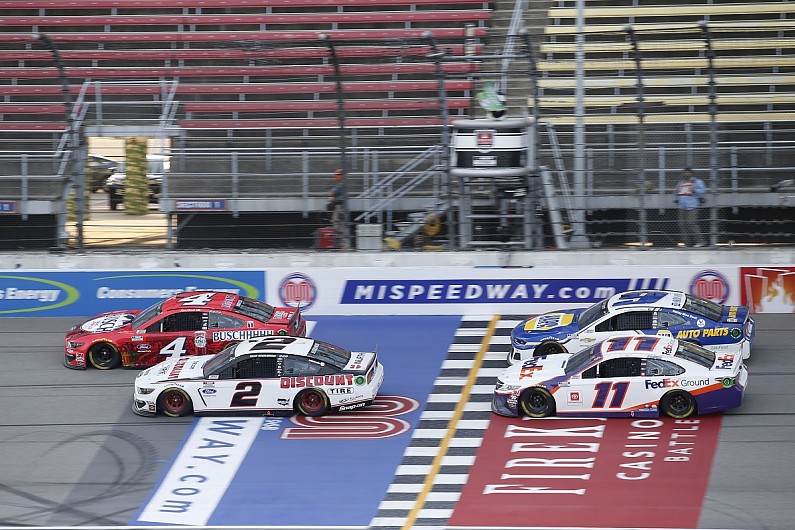 In the two-lap shootout, Keselowski side-drafted Harvick on the back-stretch, but a nudge from Elliott’s #9 Camaro was enough to send Harvick into a lead he would not lose to claim the fifth win of a strong 2020 campaign, fourth at Michigan overall and 54th of his 20-year career – equalling the tally of Lee Petty.

Keselowski, on his home track made it a Ford 1-2 as Martin Truex Jr put in a stand-out drive to claim third for JGR – his third consecutive finish in the position.

The 2017 champion suffered a flat tyre early on and dropped to the rear of the field, running as low as a lapped 36th, but worked his way through the chaos to pip Ryan Blaney’s Penske Mustang from making it a 1-2-3 in the Blue Oval’s backyard.

Kyle Busch had a strong afternoon in his run to fifth, just ahead of team-mate Denny Hamlin who suffered from a lack of pace after a four-tyre stop under a Nemechek caution and was unable to recover in the same way as Harvick.

Chris Buescher will start the second race on pole position after finishing 20th – the top 20 being flipped for Sunday’s encounter as has been the case on the three other occasions NASCAR has run double-headers in the season.

Wed Aug 12 , 2020
W Series CEO Catherine Bond-Muir has suggested that she would like the championship to continue as a permanent part of the single-seater ladder even if motorsport becomes much more gender-equal. W Series debuted in 2019 in order to create more opportunities for women in racing by offering fully-funded seats and […] 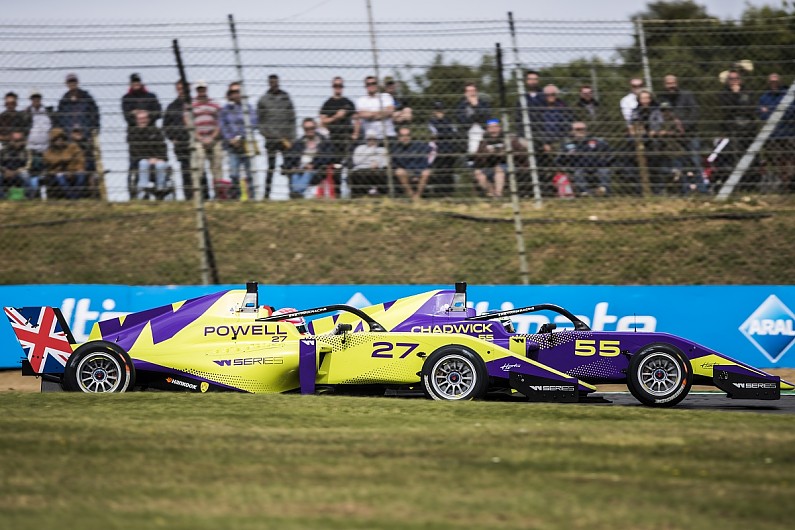