Mercedes has “categorically” ruled out its dual-axis steering (DAS) system playing a role in the tyre failures both cars suffered towards the end of the Formula 1 British Grand Prix.

Bottas’ front-left tyre failed with three laps remaining in the race, causing him to drop from second to 11th place in the final classification.

Hamilton was able to drag his car home on three wheels after his tyre failed on the final lap, scoring a remarkable home victory.

Hamilton said after the race he was “convinced” debris was to blame for the failure, while tyre supplier Pirelli pointed to the long stints completed by all drivers on the hard compound towards the end of the race.

Mercedes has used its innovative DAS system this year to help its drivers on tyre warm-up, leading to questions as to whether it had played a role in causing the failures.

But the team has moved to rule out any link between DAS and the incidents.

“A lot of questions this year, but also specifically [for] this race, were around DAS and whether that contributed to the failure or not,” Mercedes strategy director James Vowles said in the team’s post-race debrief video.

“I can categorically say the answer is no. There are a few reasons behind that.

“Next, [Carlos] Sainz also experienced a failure and clearly, they are not using a DAS system on their car and a number of other competitors complained of the vibration that Valtteri was.

“This wasn’t contained to us but clearly, we were on the worse side of the problem.” 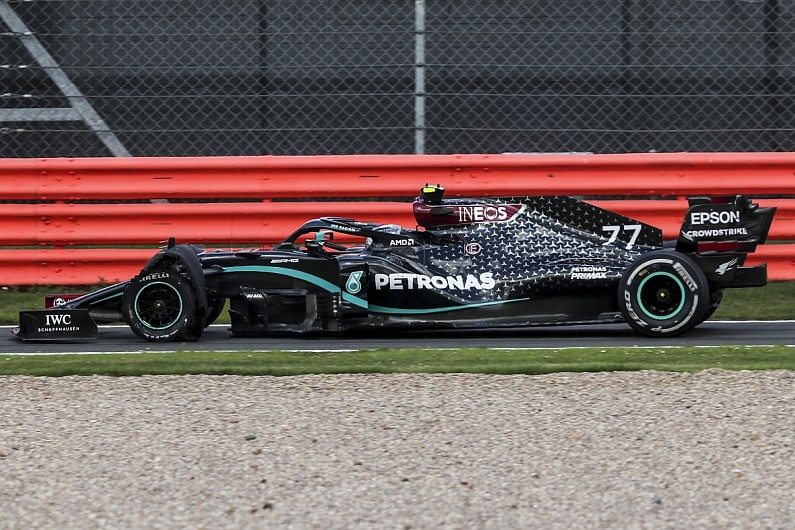 Pirelli has confirmed it will raise the minimum tyre pressures for this weekend’s 70th Anniversary Grand Prix (also at Silverstone) in response to the incidents, but plans to stick with the plan to use a softer selection of tyres.

A new kerb has also been installed at the exit of Becketts corner in a bid to deter drivers from running wide and placing debris in a kerb that may have caused tyre cuts.

Vowles said Mercedes would be going into the second Silverstone race with its “eyes wide open” after the issues last weekend.

“We have a wealth of data available to us, but the compounds are going to go one step softer this week,” Vowles said.

“We are going to go into Silverstone now eyes wide open.

“The reality behind it is that on Sunday, the Safety Car coming out as early as it did pushed all the competitors into that very long one-stop.

“People will be more cautious now and I am sure you will see a lot more two-stops, which may just be an effect of the compounds as well.”

Indianapolis 500 will not have any spectators after all

Wed Aug 5 , 2020
In a change of decision, the Indianapolis 500 will not have any spectators after all according to David Malsher-Lopez of autosport.com on Tuesday. Initially, there were plans to have spectators come into the Indianapolis Motor Speedway at 25% capacity. That would mean 87,500 fans would be allowed. However, further evaluation […]