Marco Andretti is starting first in the 2020 Indianapolis 500.

The third-generation racer barely beat out Scott Dixon on Sunday to start first in the pandemic-postponed race. Andretti had the fastest qualifying time of everyone on Saturday and then posted the fastest four-lap average again on Sunday among the nine drivers who were racing for pole position.

Andretti’s pole is the first for the famed racing family since his grandfather, Mario, started first in the 1987 Indianapolis 500 when Marco was a baby. Marco’s father, Michael, never started first in the Indy 500 and famously never won the race despite coming close and having an incredibly fast car in myriad races.

“Actually, I thought of him because today when I walked out of the motorhome, it was pretty windy,” Marco said of his grandfather. Sunday’s qualifying session was held in a crosswind. “He has a famous quote ‘within us.’ He doesn’t say it to many people, but he says, ‘The wind will scare you but it will never crash you.’ So today, he was right.”

Marco’s come close to winning the Indy 500, too. He was leading the race as a 19-year-old out of Turn 4 on the final lap in 2006 before Sam Hornish Jr. slingshotted around him for the win.

Andretti’s IndyCar achievements have not been anything like those of his grandfather and father. While Mario may be the greatest racer of all-time and Michael won the 1991 CART title and has 42 wins in more than 300 starts, Marco has won just two races in 240 career IndyCar starts.

His most recent win came in 2011 at Iowa. While he finished fifth in the points in 2013, he hasn’t finished any higher than ninth since then and was 16th in the standings in 2019. He enters the Indy 500 in an abysmal 21st place through six races. He has just one top-10 finish in those six races and has failed to finish two of them.

A win in the 500 would be a huge boost to Andretti’s slumping career. And it would give IndyCar some mainstream name recognition in a month it typically gets ignored in. Sunday’s race is being run three months after it was originally scheduled on its traditional Memorial Day weekend spot. The 500 — the first with legendary team owner Roger Penske as the track’s owner — will also be run without fans. Indianapolis Motor Speedway had long hoped to have fans in attendance but made the right decision to run the race in front of empty grandstands.

The Chevy-powered Penskes have trailed Andretti Autosport and Chip Ganassi Racing’s Hondas in outright speed so far and that showed during qualifying. Will Power will start 22nd and defending Indy 500 champion Simon Pagenaud will start 25th. Helio Castroneves, back for his now annual one-off attempt at a fourth Indy 500 win, will start 28th and have just five other cars behind him when the race goes green.

With 33 drivers attempting to make the 33-car field, no one failed to qualify for the race.

Nick Bromberg is a writer for Yahoo Sports.

Sun Aug 16 , 2020
Marco Andretti has won the pole for the Indianapolis 500 in a lightning-fast first step toward snapping the infamous “Andretti Curse” at Indianapolis Motor Speedway. Andretti logged a four-lap average of 231.068 mph in Sunday qualifying, and an Andretti now will lead the field to green for the first time […] 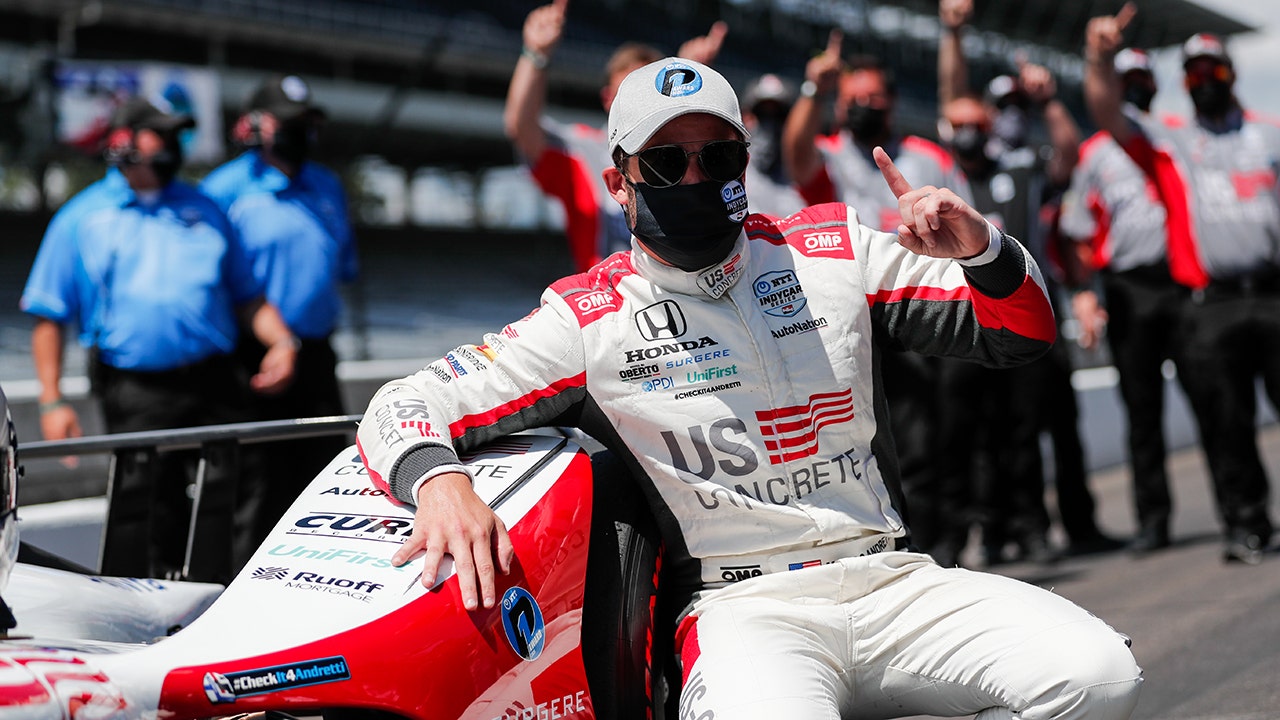