For the first time since 1987, an Andretti will lead the Indianapolis 500’s famous three wide start.


Marco Andretti, who led both Friday’s practice session and yesterday’s first day of qualifying, has been the standard bearer of speed throughout the first week of running at Indianapolis. He was the favorite for pole coming into this afternoon’s Fast Nine session, head of a contingent of four Andretti drivers who took the top four spots in yesterday’s session. His speed was in doubt, however, when all three of his teammates from that group went out and struggled to show significant speed.

Scott Dixon had set the standard, an average of 231.051 MPH, for the session in the fifth run of the day. The four Andretti cars each ran after Dixon, but Ryan Hunter-Reay, James Hinchcliffe, and Alexander Rossi found themselves struggling to 230.648, 229.870, and 229.234 MPH, respectively. Andretti had reason for pessimism before his run, but his shot at pole was clear from his first lap: 231.826 MPH, the second-fastest single lap of the session. Andretti maintained speed on his next few laps, as the #98 consistently has over the past few days, and was able to take pole for Honda and his father’s Andretti Autosport team at 231.068 MPH.

Mid-afternoon heat meant that track conditions were relatively slow, leaving a lap by Alex Palou clocked at 231.901 MPH as the fastest of the day. A strong headwind created unreal speeds entering turn 1, however; Graham Rahal, who held the fastest top speed of the day, was clocked at 240.288 MPH on entry into turn 1.

Former Indianapolis 500 winner Takuma Sato joins Andretti and Dixon on the three-car front row. Ed Carpenter Racing’s Rinus VeeKay will be the lead starter among both Chevrolet entries and rookies in fourth, while fellow rookie Alex Palou will start immediately behind in seventh. VeeKay will be the only Chevrolet driver starting in the top ten.

The 104th running of the Indianapolis 500 will take place a week from today.

Andretti fastest on day one of Indy qualifying, Alonso will start 26th, 19-year-old VeeKay in Fast 9

Sun Aug 16 , 2020
Andretti claims Indy 500 pole position Marco Andretti denied Scott Dixon pole position for the 2020 Indianapolis 500 with the last run of Fast Nine qualifying – taking the squad’s first pole for the race since 2005. Andretti, who had finished the first day of qualifying on Saturday fastest, was […] 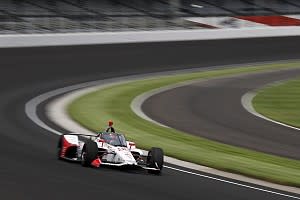