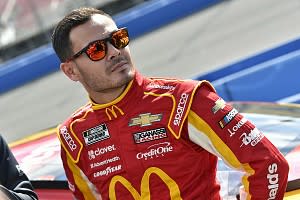 Larson, 28, was fired from his Chip Ganassi Racing team in April for using a racial slur during the broadcast of an iRacing event and was also indefinitely suspended by NASCAR at the time.

Larson was also at one point suspended from World of Outlaws competition, but was reinstated once he completed sensitivity training within a 30-day period.

He was also suspended from iRacing competition.

In a brief statement to Autosport on Wednesday, NASCAR confirmed Larson has requested reinstatement.

However, NASCAR said the case remains under “review” and Larson remains suspended.

During his suspension, Larson has continued to compete in sprint car events.

He has amassed 24 victories so far this year with an average finish of 3.413 in 46 starts.

In an interview with Autosport on Wednesday, NASCAR Hall of Famer and fellow sprint car driver Tony Stewart said NASCAR should reinstate Larson.

“Kyle has done everything NASCAR has asked him to do,” Stewart said.

“I think there are a lot of things besides what NASCAR has asked him to do that he’s done on his own to try to make this right and to try to do the right thing.

“Ultimately, NASCAR has to be comfortable with that.

“It’s going to be their decision if and when he comes back.”

In recent months, NASCAR has pushed its anti-racism and diversity message hard, with its most significant step coming with the outright ban of Confederate flags from all NASCAR events.

Bubba Wallace, NASCAR’s only black driver, was instrumental in getting the racist symbol outlawed, and has been a figurehead for world motorsport’s call for racial equality.

Formula 1 world champion Lewis Hamilton has led the charge in changing attitudes in motorsport, with F1 setting up its We Race As One initiative in response, while Hamilton’s Mercedes team has been running an all-black livery to promote diversity.