The @WWTRaceway@IndyCar doubleheader weekend is off to a wild start. Watch on NBCSN or stream here: https://t.co/THKlb49aWTpic.twitter.com/VJqQYGUq5B

Then Veach, who qualified last for Saturday’s race, drove into the back of teammate Andretti, who then jammed into Carpenter.

Rossi immediately stormed out of his car and strode up pit lane to speak with his team to try and watch the replay and figure out what happened. The incident signaled Rossi’s fifth incident-filled race through eight this year. He also had a pre-race electrical issue at Texas, a mechanical in the GMR Grand Prix, contact that sent him off course in Race 1 at Road America and sliding into the wall in last Sunday’s Indy 500.

Once reached by NBC Sports pit reporter James Hinchcliffe, Rossi had cooled down and was essentially laughing off yet another bout of bad luck.

“I’m not blaming anyone,” he said on the broadcast. “It’s very reminiscent of a Michigan iRacing start at the beginning of the year.”

In all, it immediately ended the days of Rossi, Veach and Andretti. Carpenter, who also dealt with contact in Lap 1 of the Indy 500 that put him more than 10 laps down immediately, spent nearly the first half of the race in the garage. He came back out on track for a while before retiring. Pagenaud got back on track, but fell several laps down quickly due to issues with his shifting. Around Lap 70, Pagenaud exited his car in pit lane.

Askew was forced to pit early due to the contact but remained in the middle of the field. The Arrow McLaren SP driver, along with Palou, were both sent to the back of the field for avoidable contact before the race returned to green on Lap 15.

Insider: How Bobby Rahal rebuilt his IndyCar team from a one-off entry to a Big 3 threat

Sun Aug 30 , 2020
William Byron clinched his first NASCAR Cup victory at Daytona as a late race crash denied seven-time Cup champion Jimmie Johnson a place in the playoffs. Byron, Johnson and Matt DiBenedetto, the three drivers on the bubble in the fight to get into the Round of 16 as the field […] 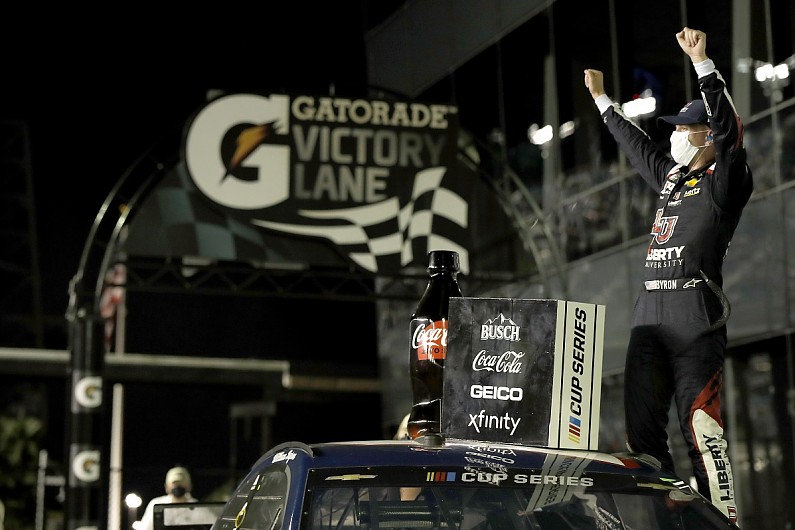