Swanson, from Kingsburg, Calif., again will take on all the established front runners in the ultra-competitive Indy Pro 2000 Championship Presented by Cooper Tires, which has seen five different drivers head to Victory Circle from the opening six races of the season.

The title-chase is finely poised with the top five drivers separated by just 21 points. At stake is a scholarship valued at over $600,000 for the series champion to move onto the next step of the open-wheel development ladder, Indy Lights Presented by Cooper Tires, in 2021. A maximum of 48 points are up for grabs this weekend in the second oval event in successive weekends.

Canadian rookie Devlin DeFrancesco currently holds a seven-point advantage for Andretti Steinbrenner Autosport, which is making its return to Indy Pro 2000 for the first time since 2015. DeFrancesco, 20, has been a model of consistency during his first season of racing in North America after competing in Europe for the past five years. He finished a strong fourth last Friday in his very first oval race at Lucas Oil Raceway at Indianapolis.

“I learned a lot last weekend – how to race in traffic, and how to pick and choose when to push to save the tires, though managing tire degradation is something I was used to,” said DeFrancesco. “This weekend, it’s about getting up to speed as quickly as possible and making sure we start the way we left off last weekend, with a very well-balanced car. Everyone on this team has so much oval experience, and I know that preparation is key: that’s what makes the difference at the end of the day. We need to make sure we stay consistent and competitive every time we go out, that’s the goal. I’m hugely excited for the weekend.”

Sting Ray Robb, from Payette, Idaho, lies second in the points table following his maiden victory recently at Mid-Ohio, while Juncos Racing teammate Artem Petrov, from Saint Petersburg, Russia, sits fourth as the only driver to have won more than once so far in 2020.

Sandwiched in between them is Danial Frost, 18, from Singapore, who won the opening race of the season at Road America for Turn 3 Motorsport.

Other potential contenders in a stacked field include last year’s Cooper Tires USF2000 Championship winner, Braden Eves (Exclusive Autosport), from New Albany, Ohio, who has already won once this year, and fellow rookie Hunter McElrea (Pabst Racing), from New Zealand, who has bounced back from a difficult start to the season to finish second in the two most recent races.

And then there’s Swanson. The most successful driver in the storied history of the Silver Crown series dating back to 1971, with 29 race wins and five championships to his credit, had never raced a rear-engined open-wheel car prior to lining up on the grid last Friday night. The deal was finalized late, only a couple of days before the race, but he proved a quick study by qualifying second and eventually romping to the victory, thereby rekindling his hopes of perhaps one day achieving his ultimate ambition: to compete in – and win – the Indianapolis 500.

“I was familiar with the Road to Indy,” related Swanson, “and while I’ve known people in the sport and in the series, it was never intimately enough to make a break to drive in it myself. But I know how the ladder system works, that it is a path to Indianapolis for someone like me.

“Although I’ve been to World Wide Technology Raceway before, the Legacy (Autosport) guys have talked to me about the importance of the draft – and while the Silver Crown cars can draft there and I’m familiar with the idea, it’s not to the level that it’ll play in these cars. I obviously have more experience now, I know a little bit about how the car reacts, but still, it’s a whole new set of challenges to learn and a bunch of good drivers and experienced teams to try to have to learn that against. I’m looking forward to the challenge and finding out where we stack up.

“We had a great night last week and while there’s still pressure to perform this weekend, I’m just focusing on the opportunity to gain more experience at a new speed and a new type of racetrack, and continue to move forward.”

Swanson will look to make the most out of the three 45-minute test sessions on Friday, August 28, which will precede official qualifying at 5:30 p.m. CDT. There will also be a final 20-minute session at 9:15 a.m. on Saturday in advance of the 55-lap race which is set to go green at 1:00 p.m., immediately prior to the Bommarito Auto Group 500, one of two NTT INDYCAR SERIES races at the unique, egg-shaped 1.25-mile oval track this weekend.

Saturday’s practice and race will be live streamed worldwide on the Road to Indy TV App, at RoadToIndy.TV and the series website, indypro2000.com.

Fri Aug 28 , 2020
LCR Honda rider Cal Crutchlow says Andrea Iannone’s doping ban appeal hearing being delayed to October is “no issue” for him in negotiations with Aprilia over a 2021 MotoGP ride. Aprilia CEO Massimo Rivola confirmed on Thursday that Iannone’s appeal hearing to have his 18-month doping ban overturned at the […] 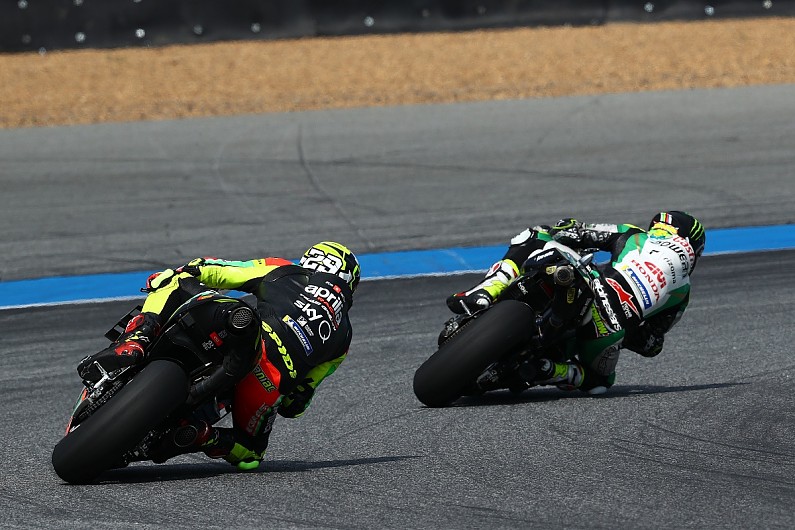