The Indianapolis 500 on Aug. 23 will be held without fans in attendance in 2020, due to growing health and safety concerns about the coronavirus pandemic, the Indianapolis Motor Speedway announced Tuesday.

“What I hope people recognize is that we’ve done everything possible to be able to do it with fans,” Penske Entertainment Corp. president and CEO Mark Mark Miles told IndyStar Tuesday. “This plan will go down as the model for how to do a mass gathering under these circumstances if it were possible.

“We’ve said all along that we had to hang in there and see if the public health situation would allow us to do it, and we’re at least as disappointed as all the fans that we can’t have them there this year.”

In a news release, IMS said that since the June 26 announcement of a 50% max capacity for this year’s race, positive cases in Marion County have tripled, while the positivity rate has doubled.

“We said from the beginning of the pandemic that we would put the health and safety of our community first, and while hosting spectators at a limited capacity with our robust plan in place was appropriate in late June, it is not the right path forward based on the current environment,” the release stated.

The news means all on-track activity around the 500 in August will be closed to the general public, and those who had tickets will be credited for the 2021 race and retain their seniority.

But, Miles stated, there’s nothing he believes that will keep the race from happening on Aug. 23 with roughly 1,500 essential personnel on the grounds of the track.

“Except for rain,” he said.

But moving ahead, albeit without fans, means race officials can avoid canceling the Indy 500 for only the 7th time since its inaugural running in 1911. The six cancellations came in stretches from 1917-18 and 1942-45 during the First and Second World Wars.

It also comes in the face of new IndyCar and IMS owner Roger Penske’s assertion back in early June that the first Indy 500 under his stewardship would be held only if fans would be able to attend.

The change in plans also comes just a couple of weeks after IndyCar and IMS officials released an 88-page health and safety plan that detailed how it planned to help keep an estimated 25%-capacity crowd orderly and safe during the two weeks of activities leading up to the 104th running of the Indy 500.

In that plan, released July 22, officials announced that, of the original estimated 170,000 tickets IMS had sold by late June for this year’s race, nearly half of those were relinquished in exchange for future IMS event credit when officials sent out a survey to ticketholders June 26 asking if they would like to hold onto their tickets, given the current climate. Ticketholders were told they would get only half of their tickets in the area they originally were located to allow for social distance in seating. At that point, IMS announced a maximum capacity of 50% (or roughly 175,000 fans) for the Aug. 23 race.

When it was unveiled, IMS’s plan was given the seal of approval from Marion County Public Health Department director, Dr. Virginia Caine, who stated in the release, “The IMS plan has been developed in consultation with the Marion County Public Health Department and the Indiana State Department of Health, and reflects the current best practices and mitigating steps outdoor venues should have in place to host public events.”

She added, though, that it would be under continued review, as health conditions locally and statewide evolved.

Before IndyCar’s first set of races to be held with fans in grandstands around the Iowa Speedway oval for a doubleheader July 17-18, Miles said the fate of IMS’s fans plans for this year’s Indy 500 would rely heavily on the status of the virus containment in Indiana, specifically, rather than the country at-large.

“What we’re trying to do is figure out what a ‘new normal’ looks like, so we can continue to operate in as safe and responsible a way as possible and take care of our fans and our community,” Miles said July 16. “What’s happening in Indianapolis is still being dialed in and will probably be somewhat different.”

Miles told the Sports Business Journal the following week that, “Unless the COVID-19 world crashes in on us and healthcare metrics really turn south meaningfully (in Indiana), I’m quite confident we’ll be able to do the race.”

Drivers and officials around the series were supportive of Penske’s public announcement in early June that the 2020 race would only be held with fans.

Now, they’ll have to grapple with what seemed only a mere possibility six weeks ago.

Added Andretti Autosport driver Zach Veach at the time: “An Indy 500 without fans is an Indy 500 I don’t wanna race. The fans are what make that experience.”

Wed Aug 5 , 2020
Helio Castroneves is targeting a full-time ride in the IndyCar Series next season, but expects this month’s Indianapolis 500 to be his final drive for Team Penske in single-seaters. With Acura and Team Penske having announced that their partnership will dissolve following November’s final round of the IMSA SportsCar Championship […] 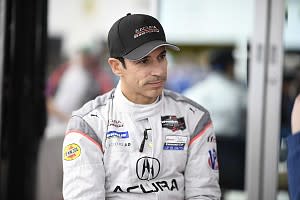