Less than a mile into the trail, I crossed over a little plank bridge, over a small hump and then KERSNAP. I knew something was wrong, it just took me a minute to realize that two rather important parts of my bike had completely detached.

I didn’t quite expect to love this bike, an ‘87 Schwinn Cimarron I venmo’d a guy $150 for across the country and had shipped home. The bars looked wrong. The drivetrain looked wrong. It didn’t come with eyelets on the fork, like Cimarrons are supposed to. But once I got the thing, put it together, started bombing park trails here around Brooklyn with it, I started to fall for the thing. It felt like a tough little bastard, and I couldn’t stop trying to bunny hop it off of every curb I could, launch it off of every jump I could find, just ride it as much and as hard as I could.

G/O Media may get a commission

What I should have kept a closer eye on was a little hairline crack that I noticed along the top of the seatsays. These are the tubes that run from the top of the seat post down to the rear dropouts, where you mount the wheel and hang the rear derailleur. The seatstays are thin, but they’re structural. They hold the bike together. When they snap, your bike flops and creaks like it is falling apart. As I found out on one (short) ride in Vermont.

You can see a bit of rust along where the seatstay snapped.
Photo: Raphael Orlove

The thing was my Cimarron was so much fun to ride around Brooklyn that I couldn’t help but take it up for a few days of riding in Vermont. It fit happily in the back of the Kia Seltos I am reviewing, along with my girlfriend’s Crust. Her bike is a modern gravel bike, mine is an ancient mountain bike. As is the way that things evolve back into each other, both of our bikes have the same size tires, and both are rigid, with no suspension. They’re both designed to depart into the woods or the desert and return after a few days, riding on dirt and carrying your stuff along the way.

My bike accomplished not even one mile of that design brief, copping along what really was not a very intense single track around the base of Mt. Ascutney.

Honestly, I think I cursed myself. Instead of my old ‘70s Volkswagen, I dared to take a new car on that Vermont road trip. Something had to break. This time since it wasn’t the car, I guess it was time for my bike to snap not quite in half.

I guess I’m glad the break happened as it did. It was just some low-speed single track riding, and I had no trouble coming to a stop to check, no that’s not my brakes that made that sound, oh fuck, it’s my frame split apart. If I had taken the bike on one more “let me see if I can take this little jump at 20 miles an hour” whoop, I wonder if I would have split the bike on the landing and gone flying into a tree.

What is a major bummer is I fear this might be the end of this frame.

I sent a DM to a frame builder I know, Joe at Cobra Frames, to see if the bike was reparable and if he knew anyone who could do the fix. He passed along some names, saying that fixing detached stays does take a lot of skill and some tools, but in the scheme of things, it’s not the worst kind of bike repair. He passed on some names of frame builders who he knew had the wherewithal to do the job, but he didn’t know if they took on repair work. I sent along some more DMs and messages, but have gotten mixed replies back. One local frame builder here in Brooklyn saw my photos and told me that I may need a complete seatstay replacement. That’s not a repair he does with lugged frames.

Another local frame builder recommended by another buddy said he’d take a look at my bike and could probably fix it, so I at least have some hope there.

I have a few options even if the frame can’t be repaired. I could buy a new frame and move all my parts over. The problem there is that aren’t any spare Cimarron frames that quite match this one up for sale at the moment (this is close but also comes with worse brakes). I could also part out another complete Cimarron of the same size, but there are none around for less than $500. If I can’t find someone to fix this frame, I might have to hunt down another bike entirely.

And that’s a bummer! I had fun things planned for this bike. I managed to scoop up a used Nitto drop bar that was period correct for people making racy-style mountain bikes of this time. It would have been a fun project making the whole setup work as it would have in the ‘80s. I was getting used to a wider tire, a smaller frame. I was falling for this thing, and even though I bought it as just a fuck around bike, I wasn’t ready to say goodbye.

How Climate Friendly is Bike Sharing? It's Complicated 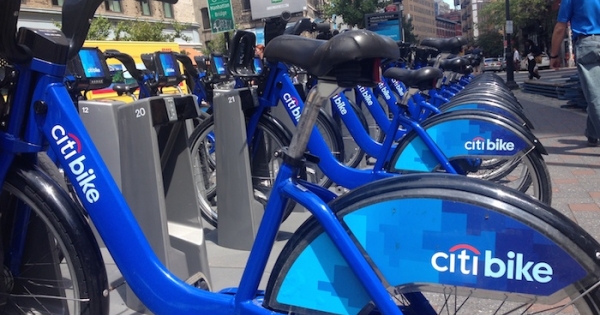