With the original Sprint calendar reduced by one weekend due to the outbreak of COVID-19, three races were held in a single weekend for the first in series history.

The Silver Cup entry of Aurelien Panis and Thomas Neubauer surprised with two poles for Lexus with Marciello and Boguslavskiy topping the second session.

Neubauer started race one and vigorously fended off an attack from the CMR Racing Bentley Continental of Jules Gounon at Turn 1 to maintain the lead.

The Lexus was never more than a second ahead of the Bentley and led right up until the pit window opened with half an hour of the 60-minute race remaining but was forced out of victory contention with a suspected broken radiator after Neubauer swapped with Panis.

Panciatici then led, having taken over from Gounon, but his advantage was reduced to nothing as Benjamin Hites’ Mercedes was clipped by the Audi of Mattia Drudi at Turn 8, bringing out the full course yellow.

At the restart, Vanthoor passed Panciatici for the lead at Turn 8, with WRT Audi team-mate Kelvin van der Linde grabbing second on the corner exit. 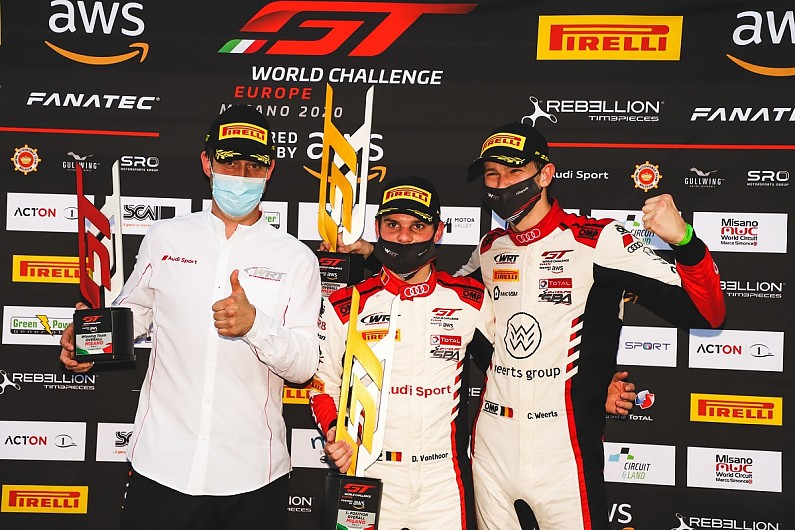 Vanthoor and Weerts claimed the win ahead of van der Linde and former Super GT300 driver Ryuichiro Tomita, with Panciatici and Gounon third.

The Audis had to play second fiddle to a pair of Mercedes in race two, as Marciello and Boguslavskiy withstood race-long pressure from the impressive Tomita to come out on top for their first win of the season.

Tomita took over from van der Linde at the pitstops and looked to have pace in the Audi before a mistake exiting the final turn dropped the pair to seventh.

Any one of five cars could have won the race as Luca Stolz finished a close second in the Haupt Racing Team Mercedes alongside Maro Engel.

Weerts and Vanthoor ended up fourth behind Sainteloc’s Arthur Rougier and ahead of the Emil Frey Racing Lamborghini of Giacomo Altoe and Albert Costa.

Come the final race, Neubauer again opened a healthy margin at the head of the field in the opening stint, but the Audis came to the fore once more at the pitstops, with Weerts handing over to Vanthoor.

A lengthy stop dropped the Lexus down to seventh and its race was eventually ended after being hit heavily by Panciatici’s Bentley while disputing sixth at Turn 7.

Vanthoor led the field away from the subsequent safety car intervention with three minutes remaining, eventually taking the win by just over half a second from Haase.

The Pro-Am victories were split between the Tempesto Racing Ferrari of Christopher Froggatt and Edward Cheever and the AF Corse Ferrari of Louis Machiels and Andrea Bertolini.

Sun Aug 9 , 2020
Cadillac’s introduction of its electric portfolio began with the debut of the LYRIQ show car — a dynamic, modern and fully electric luxury crossover. The propulsion system and supporting technologies position Cadillac to be a leader in electrification, connectivity and automated driving, all delivered with thrilling performance and a new […]