What you will see is one of the fastest fields in race history, as 33 drivers from 12 countries try to outsmart, outwit and outperform every other driver on the track to get that drink of milk in victory lane. You’ll see the excitement, drama, heartbreak, and hold-your-breath action as those drivers compete for 200 laps to become part of history by winning “The Greatest Spectacle in Racing.”

Coverage of the 104th running of the Indianapolis 500 starts at noon Sunday on NBC with the green flag dropping at 1:30 p.m. Former driver and Roscoe native Danica Patrick will host the pre-race show with Mike Tirico while former drivers Paul Tracy and Townsend Bell will be in the booth to call the race along with Leigh Diffey.

Instead of doing a complete rundown of the field like I’ve done in years past, and in the spirit of everything being different this year, I’m just going to focus on the drivers I think have the best chance to win.

This is the first Indy 500 since 2000 with no women competing. That streak likely would have continued had some of the teams that were planning on either running the race or running additional cars been able to do so before everything was turned upside down.

We’ll start with Team Penske, owned by Roger Penske, who as of January now also owns the NTT IndyCar Series and Indianapolis Motor Speedway. This team has won the race a record 18 times since 1972, but this is the first time since 2002 that a Penske car isn’t starting in the first three rows.

Two-time Formula One World Champion Fernando Alonso starts 26th for the new Arrow McLaren SP team. Alonso could very well have won in his maiden and only previous Indy 500 back in 2017 had it not been for an engine failure. Look for Alonso to run strong.

Fan favorite Tony Kanaan starts 23rd for AJ Foyt Enterprises with Beloit-based ABC Supply as his primary sponsor. Kanaan hasn’t quite had the speed this month, but the 2013 race winner has led 361 total laps in 18 previous starts. If he can find the speed, he will be in the mix at the end.

Ed Carpenter Racing consistently runs well at Indy, though it was a surprise that rookie Rinus Veekay, who starts fourth, out-qualified teammates Carpenter, who starts 16th, and Conor Daly, starting 18th. Carpenter finished second in 2018 and Daly had a career-best finish of 10th last year. I’m taking Daly as my darkhorse pick this year.

Chip Ganassi Racing has won four Indy 500 races since 2000, most recently with Dario Franchitti in 2012. Five-time series champion and 2008 winner Scott Dixon represents the team’s best shot this year and starts second. Look for Dixon to make it difficult for anybody to outmaneuver him. Dixon’s teammates, Marcus Ericsson and Felix Rosenqvist, start 11th and 14th, respectively.

Michael Andretti led 431 laps in 16 Indy 500 starts between 1984 and 2007, but he never finished better than second. His Andretti Autosport team has won the race five times since 2005, most recently with Sato. The team has been fast all month and brings six drivers to this year’s race, any of whom would be a deserving winner.

I’ve picked Marco to win this race a couple times previously, and even though he led the most laps one of those times (2012) and finished fourth the other (2013), this time feels different. He’s been the fastest guy on track all month and he’s got the confidence and experience to finish the job. He will finally be able to forget about finishing second by just a few heartbreaking yards in his rookie year of 2006.

It’s worth mentioning the last time the No. 98 sat on the pole at Indy, it was with Parnelli Jones in 1963 and he won that race.

Look for the so-called “Andretti curse” to be vanquished from the hallowed grounds of the Indianapolis Motor Speedway when an Andretti visits victory lane for the first time in 51 years.

Fri Aug 21 , 2020
Auto racing is a dangerous sport and one that features speed-hardened competitors who seem unbothered by the omnipresent potential for god-awful tragedy. But every so often, events occur which transform even drivers with the coldest of refrigerants in their veins into sentimental saps. Indianapolis Motor Speedway has already produced one […] 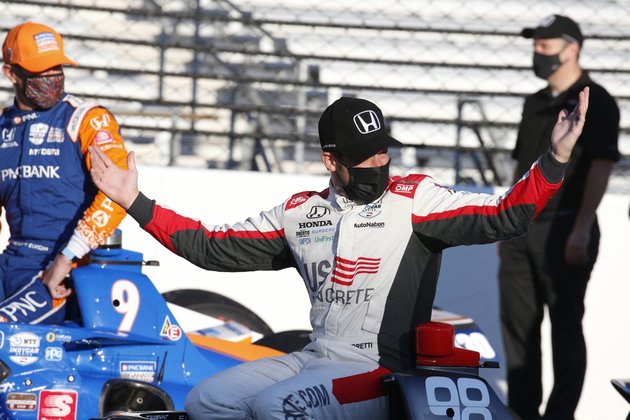