Red Bull team boss Christian Horner said before the Spanish GP at the Circuit de Catalunya that F1 needed a rivalry between world champion Lewis Hamilton and Max Verstappen, the driver many consider the only one who can seriously challenge Hamilton.

After Verstappen’s victory over the Mercedes pair the week before at Silverstone, when the heat caused the tyres on the Mercedes cars to blister while Verstappen’s Red Bull had no such issues, Horner was cautiously optimistic about his drivers’ chances of taking it to Hamilton again in Spain.

“For Formula One it would be fantastic because everybody is dying for that rivalry to erupt,” Horner said.

“Max and Lewis are the two standout drivers in Formula One at the moment. Both are at different stages of their careers and it would be great to see them go head to head, this year and next.”

Mercedes boss Toto Wolff suggested Verstappen would be the favourite in Spain, given the track temperature there was hotter than Silverstone had been.

“We have improved and that is most important. I hope we can give him a run for his money. Definitely Max needs to be seen as the favourite, based on yesterday’s long run.”

Wolff must have had his tongue firmly in his cheek when he made that comment. And he would be a dangerous opponent in poker, where bluffing is a big part of the game.

Fast forward to the results and Hamilton took his fourth consecutive victory in the Spanish GP, with a margin of 24 seconds over Verstappen, and not a blister in sight on his tyres, with Valtteri Bottas in the other Mercedes a distant third, after making a poor start and never fully recovering.

Hamilton’s fourth win in the six races held so far, means his record-breaking run in F1 continues. This was win number 88, now just three behind Michael Schumacher’s record of 91 victories. It is just a question of how many more races it will take Hamilton to equal and then surpass Schumacher’s total. The answer could be the next four races, based on Hamilton’s easy and dominant victory. This was Hamilton’s 156th podium, taking another record away from Schumacher and he had started the race on pole, his 92nd pole position, which is 24 more than Schumacher achieved and who sits second on the table. It is just a matter of when, rather than if, Hamilton will equal Schumacher’s record of seven F1 titles.

Despite his easy victory, Hamilton refuses to concede taking the title is a walk in the park.

“After the last race [at Silverstone] I looked at the standings and saw Max was second. If he didn’t have a DNF in the first race he would have only been 12 points behind so it’s a lot closer than people think in the driver standings,” he told Sky F1.

“And generally, in the race, Red Bull are right there with us. But today, though, I was just in such a different headspace in the car, it was a beautiful feeling, better than I have had in a long time. I was just in a daze out there, I was in a different zone, I felt really good.”

As for breaking Schumacher’s record of 155 podiums, Hamilton tried to put his achievement into perspective.

“I don’t really know what to say to those things,” he said. “It’s just very strange. All of us drivers grew up watching Michael and dreaming of one day being here. What is happening right now is far beyond what I dreamed as a kid and I’m incredibly grateful of the opportunity that I’m given every day.

“I think Michael was obviously an incredible athlete and driver and I always just feel really humbled and really honoured to be mentioned in the same light as a driver like him and Ayrton (Senna) and (Juan Manuel) Fangio. Its pretty cool.”

Hamilton actually replaced Schumacher in the Mercedes team when the latter decided to retire for a second time at the end of the 2012 season.

After Fernando Alonso in the Renault had stopped him winning a fifth consecutive title with Ferrari in 2005, and repeated the feat in 2006, Schumacher retired for the first time. But he returned to F1 in 2010 as a teammate to Nico Rosberg, who outdrove the seven-time champion, as Schumacher realised that trying to emulate past successes could be frustrating and not very satisfying.

Tragically, a year later Schumacher suffered a serious head injury in a skiing accident and has been bedridden ever since. Because his family refuses to issue any bulletins on his health situation, it is not known if Schumacher would recall he is the current F1 record holder or be aware that Hamilton is now eclipsing his records.

At the end of the Spanish race, Wolff was quick to make his way over to Horner and rub in the way his team was able to bounce back from the tyre problems his team encountered at Silverstone.

“You know when you have such a great win, you can properly rub it in,” Wolff told Sky Sports. “There is still a rivalry, but I respect Christian and he has done a great job over the 15 years he has been in the sport.”

“What makes me the happiest is after the difficult weekend in Silverstone on very hot tarmac, we have been able to recover, take the right conclusions and win in the same conditions. And that comes down to the great work being done in the factory.”

“At the moment, Hamilton drives in a league of his own,” Wolff added.

Verstappen got a bit tetchy with his team on the radio, when they tried to tell him what Mercedes were doing.

“How about we just focus on our race, first, for a start instead of looking at Lewis?” he said. “Because clearly on the soft tyre we are not as fast as them. So, can we just make sure we do our job and let them do their job?” the somewhat frustrated Dutchman said.

After the race he said it “was good to split the two Mercedes. I didn’t have the pace like Lewis but I’m happy with second.”

Far from happy was Bottas, even though he finished third. Given the superiority of the Mercedes car, and having overcome the team’s Achilles’ heel, which is blistering tyres in the heat, Bottas knows, given he has the same car as Hamilton, that he is the driver with the best chance of beating Hamilton.

Former world champion Nico Rosberg, who was at the race as a guest commentator for Sky, is the only driver to have beaten Hamilton as a teammate at Mercedes, taking the title in 2016 and then promptly retiring, says he knows what Bottas has to do.

“To beat Hamilton you have to get inside his head, because he’s not that strong there,” Rosberg proffered. “Bottas has to do this, even if it seems to me that he has difficulty. He even called me, but then maybe the team asked him not to ask me.”

“I was too kind at the start of the rivalry with Lewis. I learned to get a little tougher. He has to do the same too.”

Bottas suggested after the race, in which made a poor start, that “I have no clue actually what the points difference is, but it’s way too big. And I can see again the championship drifting away.”

“We’ll take a couple of days to look at everything and see what went wrong and again, move on. Obviously, at this point very disappointing.”

Hamilton’s lead over Verstappen in the championship is 37 points, with Bottas a further 6 points back.

Rosberg said: “Valtteri will be very, very disappointed with that. We really saw every little weakness in his armoury out there today. “That’s in wheel-to-wheel racing, just lacking little bit of aggressivity, which we saw at the start and so he fell back behind Stroll.”

“Lewis is on this incredible momentum and Valtteri just has to find a way to put that to an end with a bang and put in a string of results.”

Racing Point had a good day with Lance Stroll finishing fourth and Sergio Perez, who missed the two races at Silverstone due to contracting coronavirus, in fifth in what was a nice comeback after an unexpected setback. He is fighting Sebastian Vettel it seems for the drive with the team next year. Vettel was seventh, his best result for a while, but it would be harsh for Perez to lose the drive given his sponsors kept the team afloat financially before Lawrence Stroll took over, and the Mexican is eighth in the championship despite missing two races.

Spaniard Carlos Sainz was sixth for McLaren, but sadly there were no fans on hand to witness it. Had they been able to attend, the race would hardly have been memorable, unless your name is Lewis Hamilton, who is on an unstoppable record-breaking run that seemingly has no limitations.

Wed Aug 19 , 2020
MotoGP’s newest race winner Fabio Quartararo dedicated his Spanish Grand Prix triumph to everyone affected by the COVID-19 pandemic. The Petronas SRT Yamaha rider capitalised on an early moment for Marc Marquez and a Maverick Vinales struggling with his front tyre to seize the lead on lap nine of 25 […] 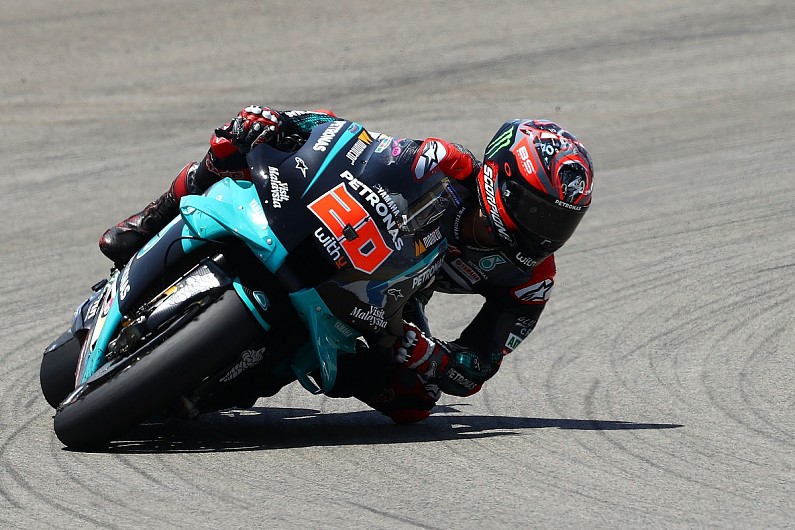