One of the most surprising automotive success stories of the past half decade comes Fiat Chrysler Automobiles in the form of an engine nicknamed Hellcat. Originally developed to pump some mid-lifecycle excitement into the Dodge Challenger sport coupe, this supercharged V8 has since found a home in the Charger sedan, Jeep Grand Cherokee and coming soon, the Dodge Durango. However, the most obvious application for this 700+ hp beast of an engine has remained unfilled, until now. Coming this fall, FCA’s Sterling Heights, Mich. assembly plant will start producing the Ram 1500 TRX.

FCA first produced a concept called the Ram Rebel TRX back in 2016 for the Texas State Fair. That wide-fendered, big-tired truck featured the supercharged 6.2-liter HEMI V8 in a detuned 575-hp form and stocked excitement for the idea of a high-performance off-road competitor to Ford’s popular F-150 Raptor. However, that generation of the Ram 1500 was already approaching the end of its life-cycle with a redesigned version just over a year away. Following the launch of the new pickup at the 2018 Detroit Auto Show, FCA announced that a production TRX would be coming during its June 2018 five year plan event.

The TRX has now finally arrived. Like the concept, it has a much bolder look thanks to bulging fenders that make it eight-inches wider than a standard Ram 1500 Rebel, 35-inch tires and a massive scoop on the hood that combines with the grille opening to inhale the air needed to make 702-hp. The ride height has been lifted two-inches bringing the ground clearance to 11.8-inches.

Ram is calling the TRX the quickest, fastest mass produced truck in the world and it probably will be until the first electric pickups start arriving next year. GMC is already claiming that the three-motor, 1,000-hp Hummer EV pickup will sprint to 60 mph in 3 seconds, easily beating the 4.5-sec time claimed for the TRX. Tesla
is making similar claims for the Cybertruck but Ford has yet to provide any details on the electric F-150 although an electric next-generation Raptor may well match its competitors.

But none of those battery-powered trucks are available yet and TRX will be on sale in the next couple of months so let’s focus on that. Whether it’s 3 seconds of 4 to get to 60 mph doesn’t much matter, especially when racing across the desert. The Rebel and the heavy duty Ram Power Wagon are already among the most capable off-road pickups.

Compared to the standard Ram 1500, the TRX frame is 75% new with thicker gauge high-strength steel used at strategic locations and fully-boxed side rails to make it even stiffer. More sections of the frame are now hydroformed as well to reduce the number of welds. Five skid plates are used to protect critical hardware such as the front axle, transfer case, transmission pan and fuel tank.

The suspension has been reworked at both ends with new longer control arms on the front corners as well new suspension links on the rear. The coil-sprung five-link rear layout is retained, but the pickup points have moved. Bilstein Blackhawk e2 adaptive dampers are used on both ends to improve the overall control. A Dana 60 rear axle is also used for extra off-road durability.

The Hellcat V8 is equipped with a 29-liter air-box and the incoming air from the hood-scoop and grille enter from the bottom. The mixing of the two air paths creates a swirl that helps dirt and water settle out in the bottom of the air box before the air heads up through the dual element filter. A jump detection system using accelerometers determines when the truck has become airborne to help eliminate power spikes that can damage the engine and driveline.

As with most new performance vehicles, the TRX also gets five selectable on-road drive modes auto, sport, tow, snow and custom that tune the four-wheel drive, throttle response, shifting, suspension and steering. There are also three additional off-road modes, mud/sand, rock and Baja which is optimized for high-speed desert running, the traditional territory of the Raptor. There is even a launch control system that watches for impending wheel hop and manages the powertrain to prevent damage and provide quick, controlled starts.

Another nifty bit of electronics is the new Trailer Reverse Steer control. This is similar to Ford’s Pro Trailer Backup Assist that let’s the driver use a knob on the dashboard to steer while backing up with a trailer. However, unlike Ford’s system that requires you to put a calibration sticker on the trailer that is read by the rear camera, Ram’s system is claimed to be self calibrating.

Current Ram trucks already have by far the best interiors in the big truck segment. The TRX will offer three interior trim packages with the base TR based on the Rebel and TR1 and TR2 based on the Limited trim. Unlike other Ram 1500s, the TRX gets a traditional console mounted shift lever and aluminum paddle shifters. The paddles are actually split and accessible above and below the steering wheel spokes, leaving a gap to access the redundant audio controls that FCA mounts on the back of the spoke.

The 12.4-inch portrait layout Uconnect 4 infotainment is standard on the TRX. The TRX will only be offered in a crew cab with a five-foot, seven-inch bed length. This is also FCA’s first application of a digital rear view mirror to provide maximum rear visibility.

No pricing has been announced yet, but given that the Jeep Grand Cherokee Trackhawk starts at $88,000, expect the Ram TRX to approach the six-figure mark. Unlike the Dodge Durango SRT Hellcat which will be a limited production, one-year only model, Ram says it will build as many TRXs as the market demands.

The TRX name is a contraction of tyranosaurus rex, the reputed apex predator of the dinosaur realm. This truck is promoted as the apex predator of the truck world. But in a world that is increasingly getting electrified, the TRX already seems like something of an anachronism, but given how well other Hellcat models have sold and how well FCA has executed on this beast of an engine, it should still provide big fun.

The T-Rex went extinct more than 60 million years ago and what was left of it and its contemporaries eventually became the fuel that makes a truck like the TRX possible. Before long, the TRX like its namesake will also be an extinct species. Enjoy it while it can still be enjoyed.

Mon Aug 17 , 2020
Charles Leclerc was prevented from rejoining the Spanish Grand Prix after pitting to have his seatbelts tightened as Ferrari had to investigate an issue with his Formula 1 power unit. Leclerc was running 11th at the Circuit de Barcelona-Catalunya before hitting the kerb at the exit of the final chicane, […] 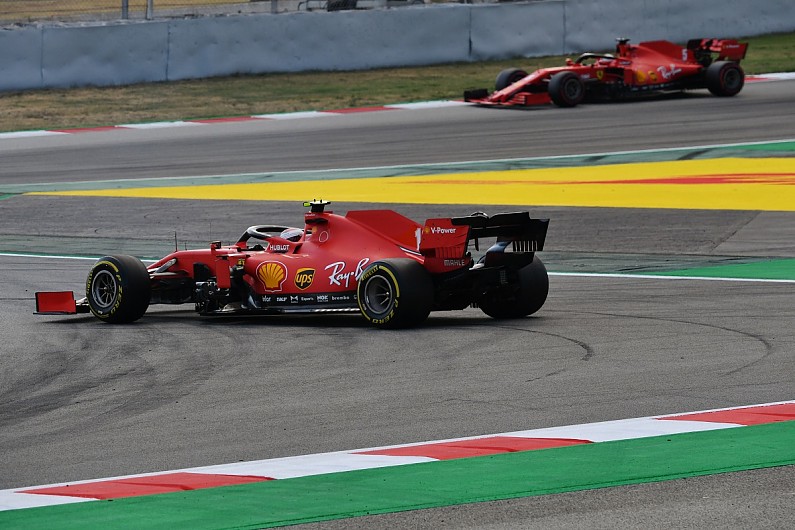