Chase Elliott secured his second victory of the season in the first ever NASCAR Cup Series race on the Daytona road course, fending off Denny Hamlin after a late restart.

Elliott’s #9 Hendrick Motorsports Chevrolet had worked his way into a 10-second lead over the pack after the race was suspended following a lightning strike near the Daytona circuit – but this was wiped out with five laps of the 65 to run after a Kyle Busch spin.

The race around the Daytona 24 Hours road course circuit, plus an additional chicane out of the oval’s turn four, then became a three-lap sprint to the finish between Elliott and Hamlin’s Joe Gibbs Racing Toyota Camry machine.

Although Hamlin was able to close to within 0.202s of Elliott, he was unable to pass the leading Camaro, handing Elliott his first win since the second Charlotte race in May, fourth in the last eight road course events and third in succession on such circuits after Watkins Glen and the Charlotte ‘roval’ in 2019.

Behind Hamlin, JGR team-mate Martin Truex Jr passed Jimmie Johnson on the final restart to take third for the fifth race in succession, having overcome a pit-lane speeding penalty.

Truex, who like Elliott had won three of the last seven road course races, was sent to the back of the pack for the stage three restart, after NASCAR officials determined he was not allowed to serve his drive-through penalty as the pit-lane was closed.

Despite that, the #19 of the 2017 series champion steadily rose through the pack, and began to latch on and reel in the Hamlin/Johnson gaggle before team-mate Busch’s spin on the oval section of the track.

On the restart, Truex nipped past Johnson for third to extend the seven-time champion’s winless run to 117 races, stretching back to Dover 2017, although Johnson’s fourth place finish was the best for the #48 Hendrick machine since third at Bristol in May.

Bowyer’s sixth place was his best since taking second at the same Bristol race in which Johnson managed third. 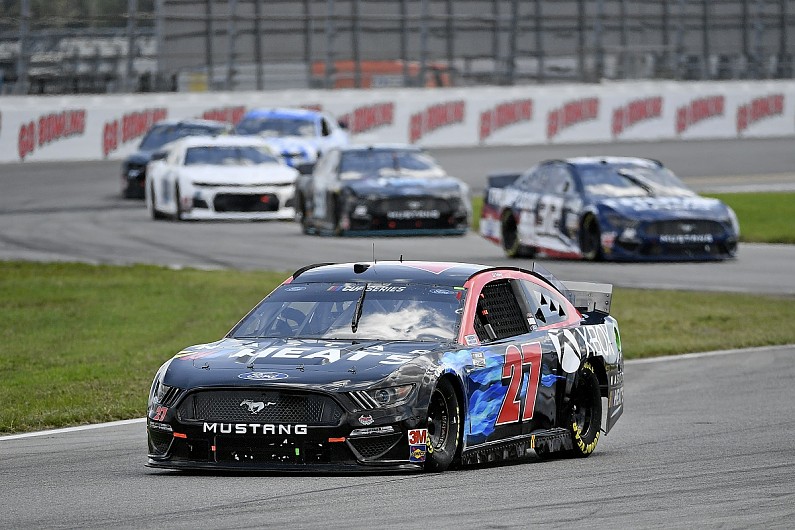 On his Cup debut, Kaz Grala drove an excellent race, standing in for Austin Dillon in the #3 Richard Childress Camaro after Dillon tested positive for COVID-19.

Starting at the back, Grala briefly led the race and was able to take a seventh-place finish, just ahead of Hendrick’s William Byron in eighth.

2018 series champion Joey Logano opted to pit for fresh Goodyear tyres under the Busch caution from seventh and restarted in 17th place as the lead runner of those who pitted.

The #22 Team Penske Mustang driver did not benefit as much as he hoped and took ninth, just ahead of Michael McDowell who took a third top 10 result of 2020 for Front Row Motorsports.

Pre-race points leader and pole-sitter Kevin Harvick endured a tricky afternoon; the #4 SHR Mustang was struggling with balance early on before Christopher Bell spun Harvick on the approach to Turn 2 on lap 32.

This dropped Harvick to the rear, and an additional spin later on left the six-time race winner this season only able to salvage 17th.

Brad Keselowski took 13th for Penske, having had to serve two separate in-race penalties for missing the chicane on the back stretch – race officials determining beforehand that any driver who did so would have to stop in the run-off before continuing.

Busch’s miserable title defence goes on, despite the #18 JGR Camry looking strong and being in contention for the win.

On lap 48, he pitted with rear-brake failure, which the team quickly fixed and got him back out after seven laps in the vain attempt to pick up crucial points to count in the battle for playoff qualification.

Five laps after he rejoined however, the rear tyres shredded, causing the spin that brought out the final caution to set up Hamlin’s ultimately in-vain pursuit of Elliott.

Mon Aug 31 , 2020
Andrea Dovizioso admits he currently doesn’t have a “plan B” for his MotoGP future after deciding to quit Ducati at the end of the 2020 season. It was announced on Saturday by Dovizioso’s manager Simone Battistella that the 14-time MotoGP race winner would not be renewing his contract with Ducati […] 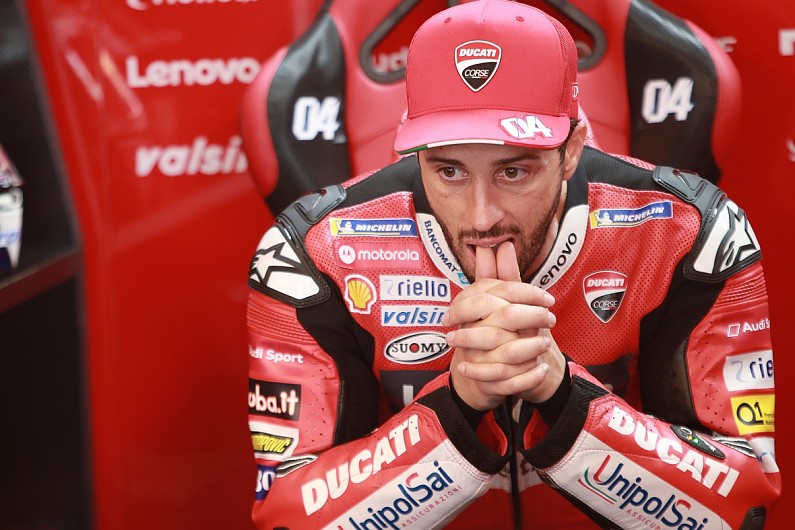