INDIANAPOLIS — On-track time is supremely precious in this year’s restricted Indianapolis 500 practice schedule, but for DragonSpeed team owner Elton Julian, driver Ben Hanley and company, they’re not in any rush. That’s good as the No. 81 Chevy entry has yet to turn laps during the nine hours of full-field action. The sophomore 500 team continues to fine-tune a car that, as of last Friday, was, “a road course car sitting in the garage with no engine,” Julian told IndyStar.

DragonSpeed USA driver Ben Hanley (81) sits with his team in the garage area during the second day of practice for the 104th Indianapolis 500 at Indianapolis Motor Speedway on Thursday, Aug. 13, 2020. (Photo: Mykal McEldowney/IndyStar)

Before the pandemic struck, DragonSpeed had its sights set on a six-race 2020 IndyCar program. But after they were forced to pack up in St. Pete without turning a wheel ahead of the original series season-opener, it was unclear whether they’d make an appearance in American open-wheel racing this year. In recent months, the team made public declarations towards its dedication to this year’s 500, where they first ran a year ago with Hanley. Even a week ago, though, with just 32 entries presumed to be set for the Indy 500, DragonSpeed was one of two contenders, along with upstart Top Gun Racing, to produce the final entry necessary for the series to reach the all-important 11 rows of three for race day.

Last week, Top Gun Racing team co-owner Bill Throckmorton told IndyStar the team had driver RC Enerson sitting in a car that they were prepared to purchase as they waited to seal a major sponsor when IMS announced that this year’s 500 would take place without fans — news that essentially sealed their fate and set back their debut to at least later this fall — if not 2021.

Though Throckmorton didn’t elaborate which team Top Gun Racing was in talks with to buy a chassis, DragonSpeed’s Julian told IndyStar on Thursday it was a failed last-minute deal with another team that reopened the prospect of his team making a run at the 500-mile race later this month.

“We’d pretty much gotten to the point we weren’t going to run (in the 500),” he said. “There was a group that was apparently really, really serious about buying me out, and then they turned out to flake. But I certainly wasn’t pursuing putting a package together (for the 500), and then some of our sports car sponsors kinda came together last-minute, and we saw an opportunity to make the field — in the sense we’d be guaranteed to make the field.

“So it gave (sponsors) some confidence, ironically enough, and that’s what got us here.”

But with  the decision coming down about a week ago, Julian’s crew started to scramble. Last weekend, DragonSpeed’s team in the European Le Mans series (including Hanley) raced at Spa in Belgium, and then were forced to turn around and head to the U.S.

Hanley said on TV Wednesday that he arrived late Monday, with most of the crew touching down in Indy on Tuesday. From there, they had an uphill battle to prepare the No. 81 car to take the track at all Wednesday. Because Hanley hadn’t raced in IndyCar since last year’s 500, he, along with six other drivers, had to complete a two-phase refresher course from 1-3 p.m. yesterday in order to be cleared to run in an open practice setting. But DragonSpeed missed the window completely while working on the car, though IndyCar allowed them a 30-minute private window last night after the close of scheduled practice at 5:30 p.m.

After a series of shakedown laps around 200 mph during that abbreviated session, the team encountered electronics issues that halted their run. IndyCar opened the track for Hanley again this morning at 10 a.m., with the hopes he could turn his necessary refresher laps to give him access to Thursday’s six-and-a-half-hour practice window.

That’s the plan. Very late opportunity to be here won’t go wasted in a rush. Best car possible for next Sunday is all that matters 👍🏼

“The engine just stopped talking to the telemetry, and when you don’t have that, they won’t let you run anything,” he said. “We tried to find the Cosworth guy in the morning, but they weren’t around, and that took longer than anything.

“But we’re about two-thirds of the way through the refresher. Everything on the car is perfect now, and we’ve actually been able to make some setup changes (this afternoon) from what we learned this morning, so we’re not losing that much. We’ll go out this evening and start running some more.”

The biggest reason for Julian’s calmness this week stems from the fact that, as the 500’s final entry, the field still sits just at 33 cars — meaning as long as they complete a run in Saturday’s near-six-hour session, they’ll be locked into the field for the Aug. 23 race.

Of course, Julian said, as ideal as it would be to pick up the racing data the other 32 cars have amassed the past two days, it’s more important to have the right car 10 days from now. And when you don’t have a back-up car as a small one-off program, the last thing you want to do is go on-track with an unfinished car and risk the ability to run in the Indy 500 entirely.

“When you get a call like this and an opportunity to do this, you do your best, and we’re still pretty calm with six or seven hours of track time left (before qualifications). We know we’re in the race, so that’s different than last year,” Julian said. “We’re just working hard to slowly put together a car that will run well next Sunday.”

DragonSpeed USA driver Ben Hanley (81) makes his way to his pit area after the first day of practice for the 104th Indianapolis 500 at Indianapolis Motor Speedway on Wednesday, Aug. 12, 2020.  (Photo: Mykal McEldowney/IndyStar)

Hanley and the team made the race with relative ease in their Indy 500 debut last year, landing 27th in the first day of qualifying, even though a broken driveshaft barely a quarter of the way into the race ended their day early in 32nd. But the work it took to start the race there hindered DragonSpeed’s ability to prepare for the race itself. As frustrating as these past two days of missed track time may be, Julian said he’s happy that, with this year’s altered qualifying process, his team may end up more race-ready in the end.

“Now, I know we’re a little behind the eight-ball, but we shouldn’t panic. It’s okay.”

Thu Aug 13 , 2020
The five-time champion clocked a 226.102mph lap, around 0.4mph ahead of Takuma Sato’s top time from the morning, while Marco Andretti slotted his Andretti Herta Autosport machine into third to make it a Honda 1-2-3. Conor Daly again looked strong for Ed Carpenter Racing, landing P4 – the last of […] 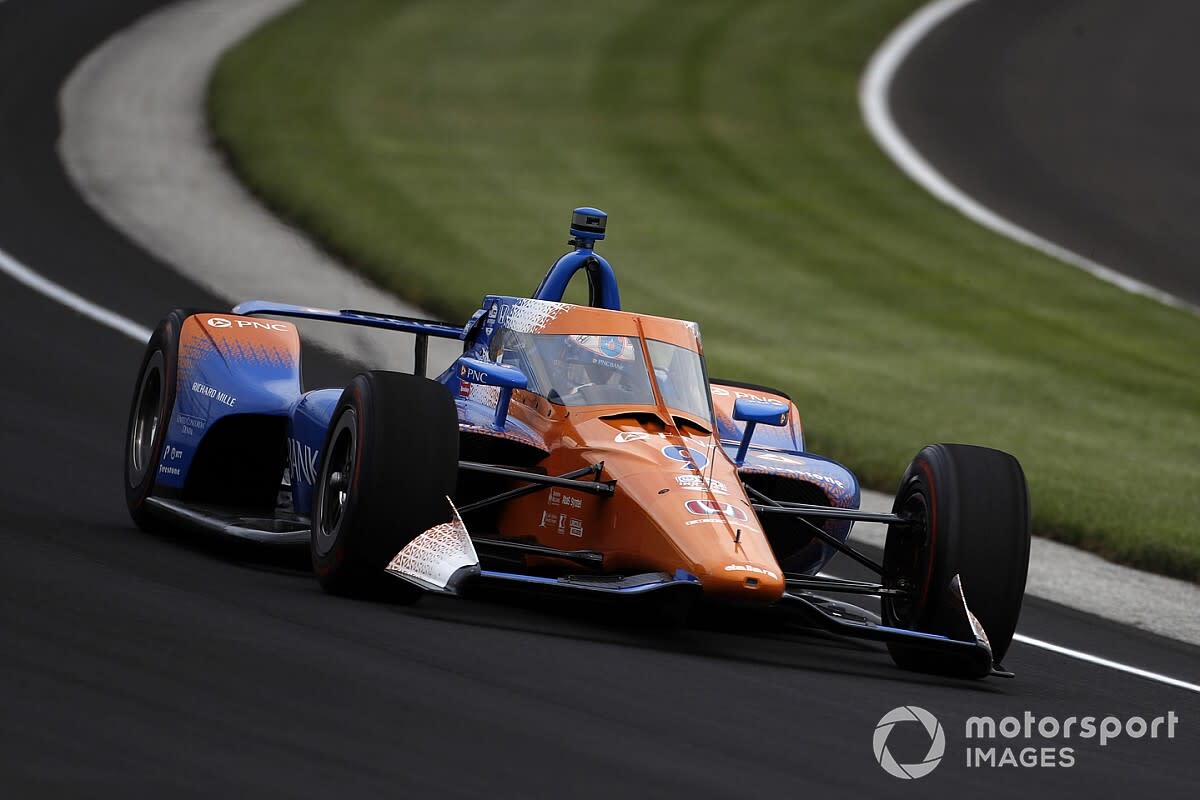