The apartment building has a footprint the size of a single netball court and has a height-to-width ratio of 16:1. According to Bates Smart this makes skyscraper is Australia’s slimmest tower and the third slimmest skyscraper in the world.

Amenities for Collins House include a residents’ club on the 27th floor with a private dining room, a gym and a car stacking system with space for 108 vehicles. A terrace on the third floor features an open-air bar.

The tower was built above the 1908 Makers Mark building that has an 11-metre-wide ornate facade on Collins Street.

The building extends up from behind this facade, which has been retained, and then cantilevers four and a half metres out on one side over an existing 11-storey office building next door.

Australian developer Golden Age bought the air rights above this building to allow the development to happen.

The floors of Collins House have an H-shaped plan, with the lifts pushed to the side meaning that all of the floor plates are column-free.

A herringbone pattern is picked out in white frames around all four sides of the tower’s glazed facade.

Bates Smart used a modular system of prefabricated parts to speed up construction and facilitate building on such a compact site between existing buildings. 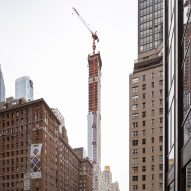 “It is the first superslim residential tower in Australia designed using modular components,” said Bates Smart managing director Simon Swaney. “A solution that enabled construction on a site that was previously deemed undevelopable.”

Prefabrication specialists Hickory developed a system of precast panels and components built in situ that did not require a jumpform – a working platform that is moved up the building as it is built.

Using a single tower crane and one hoist, precast storeys were craned into place, each level taking two to three hours to install.

Each storey was comprised of a 150-millimetre-thick floor, precast post-tension beams and a facade that was already installed. Precast stairs were built off-site.

Bates Smart estimates that this method saved up to four days per floor in construction, bringing the overall timeframe down from 40 months to just 30.

The architecture studio hopes that Collins House is a demonstration of how superslim towers can be built in similarly constrained sites in other cities.

Bates Smart, which was founded in 1853, is due to completr the new Australian embassy in Washington DC in 2022.

Another skinny tower projects pushing the limits of architecture is 111 West 57th by SHoP Architects in New York. Due to top out at 433 metres tall and 13 metres wide when it completes, it will have a height-to-width ratio of 24:1.

New York has so many skinny towers under construction that the city’s Skyscraper Museum has built an online tracker to chart them.

Photography is by Peter Clarke unless otherwise stated.

Fri Aug 7 , 2020
Fabio Quartararo says he questioned his career after a miserable Moto2 qualifying in Argentina back in 2018, but says work following that ultimately sent him on the path to MotoGP. Quartararo struggled in the first three years of his grand prix career in Moto3 and Moto2, having come into the […] 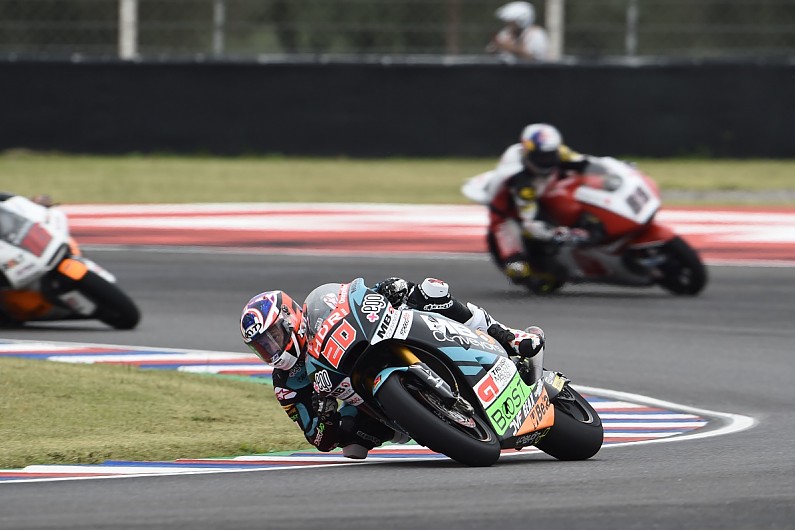