Announced in 2019, Chopard is now the World Sponsor and Official Timekeeper for Italy’s famous Mille Miglia, a globally-renowned road race spanning almost 100 years – as much of a cultural legend as a sporting event.

Mille Miglia means a thousand miles in Italian, and originally took place 24 times between 1927 and 1957. It was created by two aristocrats as an alternative to the Italian Grand Prix, which had left their hometown of Brescia in order to take place in Monza. As a unique touch, the racing cars competed on the roads of the town instead of tracks. So popular was the race, at the time, that it is credited with making sports car makers such as Porsche, Maserati, Alfa Romeo and Ferrari world famous.

Discontinued in 1957 for safety reasons, the Mille Miglia was revived after 20 years and is now one of the world’s most prestigious car endurance races, synonymous with culture, exclusivity and style. Only 450 teams can take part, and teams are only allowed to compete with a model of car that took place in the original race between 1927 and 1957.

To date, the Mille Miglia is one of the premier events on the Italian sports calendar, and attracts crowds of thousands who line the streets to watch the race take place… Quite a story for the Chopard Maison and its Co-Presidents, Caroline Scheufele & Karl-Friedrich Scheufele.

There are a number of factors that make the Mille Miglia different from other modern races. In most modern rally races, cars are released at one minute intervals, with the more professional cars released before smaller ones. In the Mille Miglia this is done the other way around, so that slower cars start the race off, allowing the roads to be closed for a shorter amount of time and simplifying the process for organisers.

Cars are given numbers that correspond with the time that they started the race, so that times can be worked out on their return. This is because, as the race covers over 1000 miles, it takes many hours for cars to finish the race. The fastest ever recorded finish time for the Mille Miglia goes to Stirling Moss, who finished the 1955 race in 10 hours and 7 minutes. Before that, it was normal for winners to take 16 hours or more to make it back.

Despite a chequered history the Mille Miglia is considered, to this day, the world’s most beautiful competition. From 1927 to 1957 the race took competitors from Brescia to Rome and back again.

The inaugural Mille Miglia race took place on 26th March 1927. Just 51 of the 70 competitors reached the finish line in Brescia, with winner Giuseppe Morandi covering a distance of 1618 km and completing the race in 21 hours and five minutes.

The Mille Miglia was briefly stopped in 1939 after a number of spectators were killed during a crash in the 1938 race, but the race was allowed to restart in 1940 after the beginning of World War II. The 1940 race was also where Enzo Ferrari debuted his first design.

Between 1940 and 1947 the race was rebranded the Brescia Grand Prix and took part on a short course of just 100m, but after the war the Mille Miglia returned in its original form, until 1957. A new accident in 1957 ended the race conclusively. Organisers realised that technological advancements meant that the cars were simply too fast and powerful to race in the streets anymore.

Twenty years after the death of the Mille Miglia, it was revived again, only this time it was more of a showcase of classic and vintage cars, designed as a stylish and fun spectacle rather than a serious sports race. Cars could only take place if they (or a model of) had done so in the original run from 1927 to 1957. The idea took off, and since 1986 the Mille Miglia has started every year from the ramp in Brescia, forming a key part of Italian culture.

Chopard And The Mille Miglia

It may seem like an odd choice for luxury jeweller and watchmaker Chopard to team up with a racing competition, but for Caroline Scheufele and Karl-Friedrich Scheufele, Co-Presidents of Chopard, the decision was an easy one. “Lovers of fine cars often have a weakness for fine timepieces and vice versa. In both cases, extreme precision and sporting elegance are especially important” he said.

And he makes a strong point. The original and classic cars that are allowed to compete in today’s Mille Miglia are triumphs of design and engineering. Artfully maintained, polished and refined, the cars almost look like jewels themselves, shining in the sun at the head of the race.

Chopard has long been understood to head the curve when it comes to complex and efficient manufacturing processes in the watchmaking world, just as the Mille Miglia is the gold standard in vintage cars.

As a sponsor for the Mille Miglia, Chopard and Caroline Scheufele & Karl-Friedrich Scheufele are able to work closely with the competition, and help to hone the stylish, sophisticated image that both are so proud of. It is a match made in heaven!

For this partnership, Karl-Friedrich and Caroline Scheufele felt that no line would work quite so well as a collection of classic watches which match the visual imprint left by the beautiful cars that take place in the race.

The line comprises the Mille Miglia Classic watches, which are aesthetically reminiscent of famous cars from the earliest days of the race (1927-1940), whilst the Mille Miglia GTS watches cover the cars from the period 1941 to 1957. The line also features a special edition model each year that is specially designed just for that year, allowing collectors to find exactly what they want from the collection annually.

The Chopard collection is refreshed year on year, with new designs all boasting that same intricate and elegant production that consumers love about Chopard and Caroline Scheufele’s touch.

Wed Aug 19 , 2020
BRDC Rising Star Ben Tuck took a lights-to-flag victory in the first race of the new GT4-based DTM Trophy championship at Spa-Francorchamps last weekend in a Walkenhorst Motorsport BMW M4. Unlike most GT championships, the ITR-organised DTM support series involves sprint races with a single driver in each car. It […] 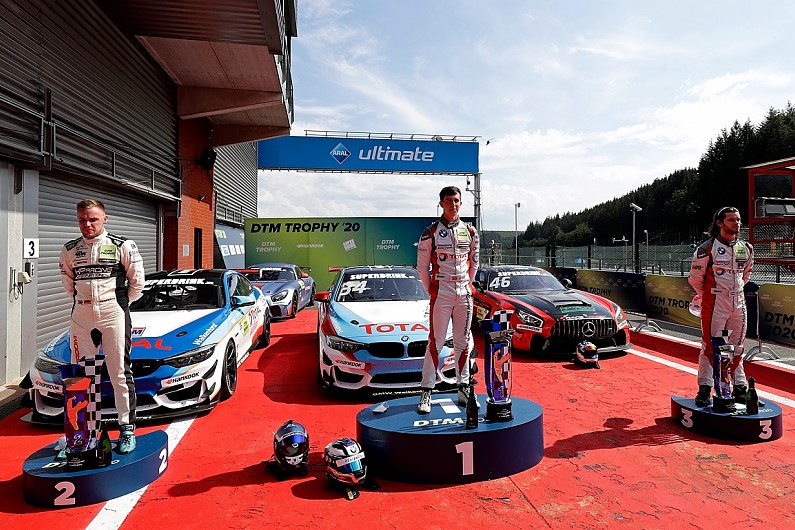