In the middle of April, one month after the restaurant shutdown in the wake of the pandemic, Chinatown had reached its lowest ebb. Some customers had earlier abandoned this important shopping and dining district, based on an irrational fear that the virus would be arriving from China, when, as it turned out, it came here from Europe.

© Provided by Eater
In April, Mott Street was a sorrowful sight.

Of the 300 or so restaurants in greater Chinatown, which incorporates parts of Two Bridges and the Lower East Side, only a handful remained open. Most retail shops and seafood, meat, and vegetable markets were closed as well. The neighborhood’s future seemed bleak.

But a month later, things began looking up. Restaurants gradually reopened for carryout and delivery, starting with those that peddled lap mei fan, ducks and other preserved meats over rice, and long lines began forming in front of places like Green Garden Village and Wah Fung No. 1. Now in early August, with outdoor dining in various neighborhoods across the city a resounding hit, Chinatown has joined in.

This last weekend, I spent three days touring Chinatown by bike once again. I met friends and tarried for five meals, paying special attention to classic restaurants that had reopened recently in the most historic parts of the neighborhood, including Mott, Bayard, Doyers, Pell, Elizabeth, Mosco, and Mulberry streets. Once part of the notorious Five Corners of Gangs of New York fame, Chinatown originated here in the 1860s.

Standing at the corner of Mott and Mosco, and recalling the sad, totally empty streets of three months earlier, the effect was exhilarating. Spread out before us on both sides of the street were more than a dozen curbside cafes, some stenciled with pictures of dim sum, others with latticed panels painted aquamarine, with red, blue, and yellow umbrellas overhead, some emblazoned with the logo of the Chinatown B.I.D. or Resy. The construction materials may have been rudimentary, but the effect was like being at a state fair. I felt like an excited kid again, marveling at Chinatown springing back to life.

I started out on Doyers Street, my favorite thoroughfare, and site of the Bloody Angle during the Tong Wars of 120 years ago. It has been blocked off, with seating set out on the pavement in decidedly makeshift fashion. Though the mercury had shot up to 95 degrees, the street was shaded by the buildings on its south and west sides, and a breeze played over the seated patrons.

© Provided by Eater
Get No. 1 on the menu, pork chop over rice.

I grabbed an incredibly delicious passel of spice-coated pork chops over rice with pickled mustard greens at Andy Wang’s Taiwan Pork Chop House ($6.25), which had placed a couple of tables right on the street in front of the post office. As eager customers appeared, they snatched further tables and chairs from the interior, and soon the street was filled.

There was an outdoor version of Mexican restaurant Pulqueria and a few tables unceremoniously set out in front of Tasty Hand-Pulled Noodles. A few steps down the street and just around the corner was Nom Wah Tea Parlor, at 100 years the oldest restaurant in Chinatown. With its faded sign, it is probably the block’s biggest attraction. I cruised in for a bit of dim sum, including shrimp rice noodle rolls and some especially good pork riblets with black beans that were righteously fatty. They were some of the best I’d ever tasted. I washed them down with a beer, even though it was only 2 p.m.

Churning down Mott Street from Grand on my bike, dodging traffic, I was amazed at the burgeoning number of outdoor dining installations. Some were just a random scatter of tables on the sidewalk, but others were elaborate emplacements of plywood, flowering plants, colorful murals, and commodious tables with comfy chairs. Sometimes these tables were sequestered into intimate nooks that invited private conversations, while maintaining a safe distance from adjacent tables.

I counted 18 sidewalk cafes in total on Mott Street south of Canal alone, four on Doyers, another six on Bayard, and one on Elizabeth, for a total of 29 in the most historic part of Chinatown. The greatest concentration was on the southernmost block of Mott Street, one of the most heavily touristed areas before the pandemic and the place most lacking in modern Chinese markets.

© Provided by Eater
The outdoor Jing Fong seats a fraction of its indoor capacity.

I met two friends for dim sum at the recently reopened Jing Fong, owned by Shui Ling Lam and Chun Tsui. In contrast to the sprawling, second-floor dining room of the restaurant, now idle but capable of holding 800, the street cafe had only six small tables with a capacity of fewer than 20. We readily acquired a four-top, and soon discovered that most of the business was carryout. No dim sum carts rolled by. Surprisingly, the entire regular menu was available, an enormous document containing whole fish and braised meats in addition to dim sum.

An enticing display of beers, including Chinese, Japanese, and domestic, was set up inside the door. I gave the greeter my name, and she input the dim sum I ordered: shrimp har gow, turnip cake, shrimp rice noodles, and chicken feet — I wondered if they’d be steamed or soy-braised.

© Provided by Eater
A particularly delicious tray of chicken appendages.

When our order arrived 20 minutes later, everything was superb, the soy-braised chicken feet especially delicious, and not requiring much gnawing. The turnip cakes were some of the best I’d tasted, custardy in texture, while the shrimp rice noodles were delicate, the pink crustaceans pristine in their freshness. My last visit to Jing Fong, pre-pandemic, had been a mediocre experience, and this dim sum seemed much better. But was it that I hadn’t eaten much dim sum lately, or was the restaurant trying harder than before?

We next strolled to the last block of Mott, which now boasts the largest concentration of sidewalk cafes in Chinatown. Many of the more elaborate installations had been designed by the Rockwell Group, famous for its upscale restaurant designs. It had engineered these outdoor eating spaces in partnership with the New York City Hospitality Alliance, with funding provided by American Express and Moet Hennessy, among other sponsors.

My two friends and I could go upscale at Ping’s, an old-guard Cantonese seafood place, or downscale at Wo Hop, the second-oldest restaurant in Chinatown and bastion of wonderfully fusty Chinese-American eats like the now-rare chop suey. But, noticing the continued popularity of Shanghai food throughout the neighborhood, with four restaurants representing it on Mott Street alone, we picked Shanghai 21, situated right above Wo Hop and owned by Peter Tan. A humongous soup dumpling beckoned overhead.

We were comfortably seated in our own little yellow-walled nook, protected from the street by a hedge of potted plants and from the adjacent table by a plexiglass barrier. We started out in conventional Shanghai fashion with a couple of cold dishes — sliced aromatic beef and kau fu, spongy gluten with black mushrooms in a sweet dark sauce. Next, a scallion pancake, newly cooked and crunchy, and after that a supremely wonderful stir fry of rice cakes with tendrils of pork and pickled mustard greens, another Shanghai classic.

This food again seemed better than usual, and it made me eager to try other Shanghai dishes on the menu, including braised pork shoulder and lion’s head meatballs — bouncy ground pork spheres braised in soy sauce, and sometimes flavored with orange rind.

© Provided by Eater
The steamy window of Wonton Noodle & Garden

My last meal in Chinatown was at Wonton Noodle & Garden, a Cantonese classic founded in 1978 and famous for its wontons, located in the block of Mott just south of Canal. It has always been a humble spot known for its low prices, and for the cooks who stand in the front window enveloped in a cloud of steam. The outdoors was more accommodating than the price point would have suggested, with sturdy tables and chairs dragged from inside, and carefully painted plywood barriers in yellow and red. A friend and I knocked back a plate of fried tofu and then another of Hainanese chicken over rice with ginger-scallion sauce.

A number of new dishes seemed formulated with outdoor summer dining in mind. One was a platter called Cantonese style cold noodle that featured Peking duck, a pile of plump cold noodles, and a thick sesame-peanut sauce. It was a refreshing dish as the sun set on a very warm day. And Wonton Noodle & Garden scored a couple more points based on presentation: As with other dishes, the combo was served on a handsome plate, rather than in plastic carryout containers.

As I departed Chinatown, I rode up Mulberry through four solid blocks of Italian restaurants in Little Italy, similarly outfitted with outdoor tables decorated with plants and tiny lights. Chinatown has some real competition here, I mused, but I’m pretty sure the food is better in Chinatown.

Gallery: 2 of the Hamptons’ best lobster rolls are served right across the highway from each other, and the best one comes with bigger chunks of meat (INSIDER)

Chopard introduces the history of the Mille Miglia 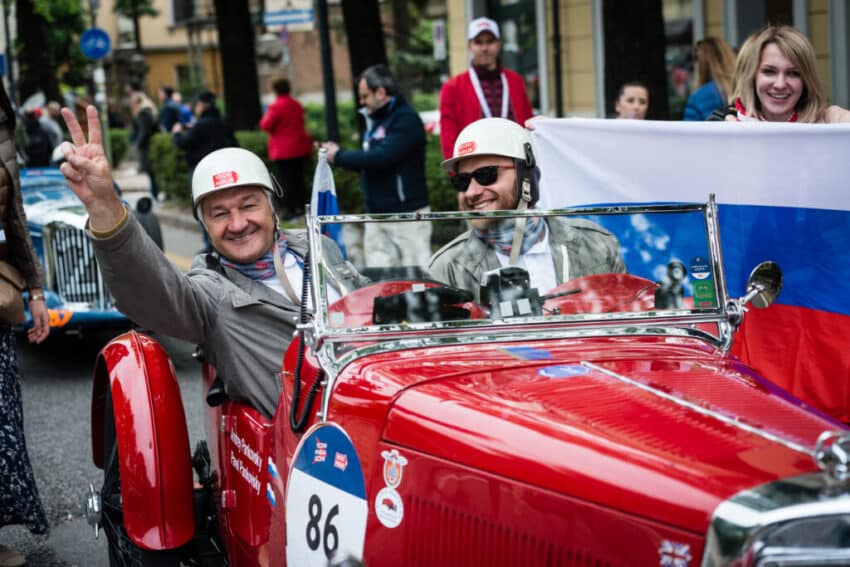