Way back in 1926, Bugatti Automobiles founder Ettore Bugatti gifted his 4-year-old son a unique birthday present: a half-scale version of Bugatti’s Type 35 race car, which won the Grand Prix World Championship in the very same year. The one-off kiddie car was nicknamed the Bugatti “Baby,” and Ettore’s VIP clients soon asked him to make one for their own children. Some 500 Bugatti Baby kid cars were produced and sold when production ended in 1936, making them very rare and expensive collectibles for well-heeled Bugatti fanatics today. But now, you can buy a brand-new Bugatti Baby II kiddie car to go along with that Bugatti Chiron Pur Sang or Super Sport 300+ you have on order. Oh, to be a (wealthy) kid again.

Bugatti announced the new Bugatti Baby II kiddie car as a celebration of Bugatti Automobiles’ 110th anniversary at the 2019 Geneva auto show, alongside the $18.9-million La Voiture Noir, but until now the details were wanting. Turns out, Bugatti is producing the Baby II kiddie car with help from The Little Car Company, a maker of detailed children’s cars.

Three different models will be offered. In order of price, the $34,800 base model is said to have a “composite” body, 1.4 kWh lithium-ion battery pack, and two drive modes: Novice, with 1.3-horsepower unlocked, is good for 12 mph; Expert will take a driver to 30 mph with 5.4 hp. Step up to the $49,900 Vitesse version of the Bugatti Baby II, and you get carbon-fiber body panels, a larger 2.8 kWh battery, and a so-called Speed Key which enables 13.4 hp from an upgraded motor—good enough for a 42-mph top speed and a 6.0-second sprint to 37 mph. The top-flight Pur Sang variant costs a whopping $67,300, and is perhaps closest to the ethos of the original Bugatti Baby. While it has the same upgraded powertrain from the Vitesse, its bodywork is rendered in hand-shaped aluminum using “traditional coachbuilding techniques” from the original Type 35 production run.

Bugatti says each Bugatti Baby II Pur Sang kiddie car requires more than 200 hours of high-value labor to produce. Given a fairly light driver and an even lighter throttle foot, buyers can expect up to a 31-mile range from the two upper trim Baby IIs, with the base model having a range of about 15 miles.

The Baby II differs from the original vintage items by being substantially larger. While a 1926 Bugatti Baby was well suited for Ettore’s 4-year-old, it’s said that children much older than 8 would have a hard time fitting inside it. The Baby II is geared more toward adolescents, and Bugatti says even adults of a certain stature will have no problem climbing aboard. True to word, Bugatti’s chief test driver, Andy Wallace, worked to tune the Baby II’s chassis so that it more closely resembles the handling characteristics of an actual Type 35, just in miniature. Bugatti used a digital 3D-scanner to accurately capture the dimensions and proportions of a genuine vintage Type 35, adding such niceties as adjustable dampers and modern-compound Michelin tires.

Similarly, the Bugatti Baby II kiddie car’s details—like the instruments reproduced from the classic Type 35—are modified to suit modern users. Where the fuel gauge once was, now sits a faithful-looking battery-charge meter. The steering wheel is a traditional four-spoke design, but it can be removed via quick release to make getting into the car easier for more fully grown drivers. The pedals are rendered in aluminum with the “EB” logo on each, just like a real Type 35, and the fuel-pump controller is reproduced aesthetically, but it functions as a drive selector. An engine-turned treatment on the naked aluminum dashboard, plus the Bugatti “Macaron” nose badge (made of solid silver as an exact three-quarter-scale replica of the same item on the Chiron) exhibit major attention to detail.

Bugatti has a website where you can spec-out your very own Bugatti Baby II kiddie car, and play around with colors and trim levels. And while all 500 cars were apparently sold out shortly after the Geneva-show introduction, Bugatti now says the suddenly weak economy has wealthy early adopters dropping out of their production slots. So, there are allocations still available for the new Bugatti Baby II kiddie car, assuming you’ve mowed enough lawns and/or sold enough lemonade this summer to plunk down a deposit.

Sat Aug 8 , 2020
Friday in Hungary saw Lewis Hamilton and Mercedes dominate proceedings in the dry opening practice, sending an ominous warning shot to their Formula 1 rivals. Hamilton set the pace on the hardest tyre compound in FP1 before rain limited running through second practice, but with no real threat from Red […] 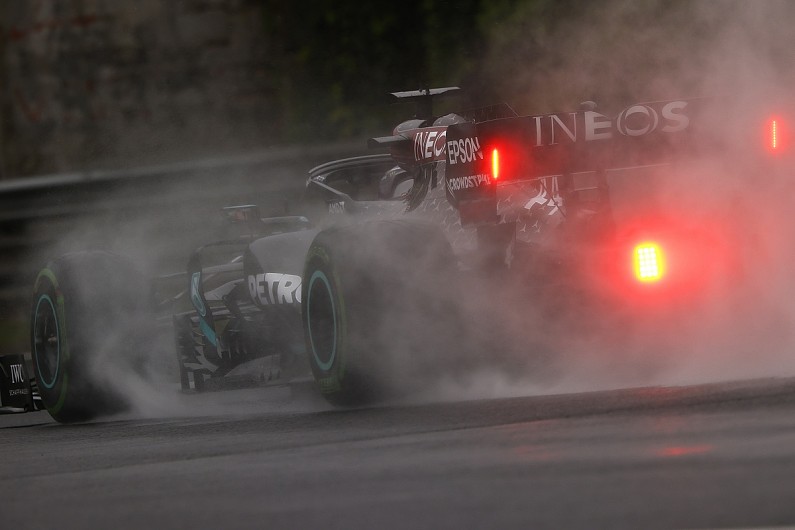