Jake Hughes scored his and the HWA team’s first FIA Formula 3 win of the season in the opening race of the weekend at Barcelona after passing polesitter Logan Sargeant.

Category veteran Hughes overtook points leader Sargeant around the outside of Turn 1 on the seventh lap of 22 to sweep into the lead, having started alongside the Prema driver in second.

The Briton was untroubled thereafter and eventually won by 2.3 seconds over Red Bull junior Liam Lawson, who made a similar to move on Sargeant to grab second on lap 20.

Sargeant made a good start from pole to hold the lead over Hughes, but the race was neutralised after just a handful of corners after Silverstone sprint race winner Bent Viscaal (MP Motorsport) got beached in the gravel exiting Turn 5.

The safety car was deployed, and the restart followed at the start of lap 4, with Sargeant maintaining the advantage over Hughes and Hitech Grand Prix driver Lawson in third.

But Sargeant was unable to shake Hughes, and as soon as DRS became available for the first time, the American driver was powerless to resist as Hughes went to the outside approaching Turn 1 and seized the inside for Turn 2.

Hughes quickly built a margin out front before the safety car was called for a second time on lap 9, this time to retrieve the stranded Prema car of Frederik Vesti.

The race resumed on lap 12 with Hughes staying in command and quickly escaping DRS range.

He went on to take his first win since last year’s Red Bull Ring round, as Sargeant was forced to turn his attention towards defending from Lawson.

With three laps to go Lawson made a near-identical move to Hughes’ from earlier in the race to seize second place, with Sargeant completing the podium.

Sargeant still came away with an enhanced points lead as Prema team-mate Oscar Piastri, who went into the race five points behind, endured a forgettable race.

From fourth on the grid, Renault junior Piastri was passed at the start by Carlin driver Clement Novalak, although he got the place back at Turn 10 on the first restart.

The second restart went less well for Piastri, who gave away positions to both Novalak and Trident driver David Beckmann by running wide at the penultimate corner just as the race was about to resume and dropped to sixth.

Novalak, Beckmann and Piastri would ultimately finish in that order, with Sargeant now leading the drivers’ championship by 14 points as a result.

Sat Aug 15 , 2020
Porsche drivers Kevin Estre and Michael Christensen have been reinstated on the GTE Pro pole for Saturday’s Spa round of the World Endurance Championship. The reigning class world champions lost pole position when Estre had his lap deleted for a track limits violation at the La Source hairpin. This has […] 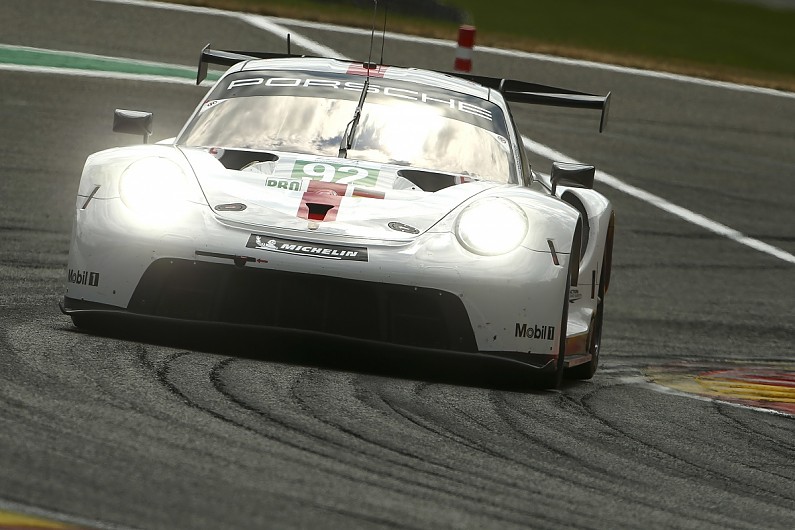