© Provided by The Canadian Press


INDIANAPOLIS — Fresh off one of the biggest moments of his career, Marco Andretti headed to St. Elmo’s Steakhouse for a small celebration with friends and teammates.

Another diner at the Indianapolis landmark said, “Go get ‘em Marco” as he passed by their table. His guests raised a glass to Andretti for “laying down a fat one” in a tribute to the late Dan Wheldon, who used that expression to describe big qualifying laps.

Andretti did just that, seizing the first Indianapolis 500 pole in 33 years for motorsports’ most famous family. His grandfather, Mario, won the last Andretti pole at Indianapolis Motor Speedway when Marco was just two months old.

Earning the right to lead the field to green in “The Greatest Spectacle in Racing” is a worthy resume highlight in itself. But what Andretti did will forever be a defining moment for a beleaguered driver.

Three of his Andretti Autosport teammates had failed to show the speed the team knows is in the cars and five-time IndyCar champion Scott Dixon had just topped the leaderboard. Andretti was the final driver to qualify. It was hot and a slight wind swirled around the empty speedway, conditions that should have slowed his effort.

With a confidence he has struggled to show in recent years, Andretti ripped four laps around the 2.5-mile oval — wide-open on the gas, fast and fearless in pursuit of his own moment of glory at Indy.

“On the last lap, I knew it was either all or nothing,” Andretti told The Associated Press on Monday at the speedway in the shadow of its famed Pagoda. “I was either not going to finish or the run was going to be very good. I had to dig deep for that, reach for the next level.”

His run was wildly celebrated by his fellow competitors — even Dixon said he was rooting for Andretti — as well as his celebrity friends. He counts comedian Kevin Hart and entertainers Ludacris and Ice-T as close friends; he took a congratulatory call from “Ice while we were on the way to dinner.”

“He’s such a great guy and a good friend,” Dixon said. “To see him get a pole position at Indianapolis — I know what that means to him and especially his family.”

Indianapolis Motor Speedway is the Andretti family playground. Mario Andretti won the Indy 500 only once, in 1969, and five Andrettis are a combined 1-for-74 when it comes to winning the most important race on the IndyCar calendar every year. It’s earned the family the notorious “Andretti Curse,” which Marco insists they don’t believe is real.

“We don’t believe in it as a family,” he told AP. “We’ve been really blessed around here and we are unscathed as far as being in race cars. This is a dangerous thing we do and we are all healthy. It’s hard to say we’re cursed. This place can bury your confidence and it can also make you.”

Now 33, Marco has been at Indy his whole life and his favourite memories, he said, were days spent at the old Speedway Motel turning laps on the balcony on a toy car as his grandfather, father, uncle and cousin fine-tuned their race cars.

He wants nothing more than to break that so-called curse, which began for him as a rookie in 2006 when Sam Hornish Jr. passed him right before the finish line. Marco finished second, his father Michael finished third and it was the first of 14 consecutive years of Indy 500 heartbreak for Marco.

He is not over that loss, bitterly noting that 15 years later he is still defending why he was so angry in defeat. The race that hurts the most was actually last year when he ran a tribute 50th anniversary paint scheme of his grandfather’s win, a time-consuming effort that his sister tirelessly put together. Radical changes made to his car were a disaster and Andretti plummeted to the back of the field at the start of the race. He finished 26th, his worst finish in 10 years.

“I mean it was just, it was a nightmare. It was totally embarrassing,” Andretti said. “It’s one of those times where I was wanted to crawl under a rock.”

Andretti recognizes that his statistics — two wins in 240 starts over 15 seasons, his last victory way back in 2011 — open him to criticism. Fans have mocked his lack of success, accused him of keeping his job only because his dad owns the team and suggested he’s not worthy of a seat in IndyCar.

It used to bother him. But Andretti has grown up in this series; he was just 19 his rookie year and teammates with series greats Dario Franchitti, Tony Kanaan and Bryan Herta, who now calls his races. He has learned to stop worrying about the chatter.

Now he’s a favourite to win the race that means everything to his family, an enormous amount of pressure that could potentially mentally drain Andretti before Sunday’s race. To clear his head, he planned to head to a family cabin in the Pocono mountains before he’s returns to the track Friday.

“It’s just about being chill and trying to not stress,” Andretti said. “I can do that there because it’s an all-wood log cabin and you get there and it’s like everything’s cool, everything is going to be alright.”

Mon Aug 17 , 2020
Despite the general consensus being that Chevrolet was down on power compared with Honda when they ran 1.5-bar boost, which teams use on Fast Friday, Qualifying and the Fast Nine Shootout, VeeKay proved that a great handling car could help make up the deficit. The #21 ECR car had looked […] 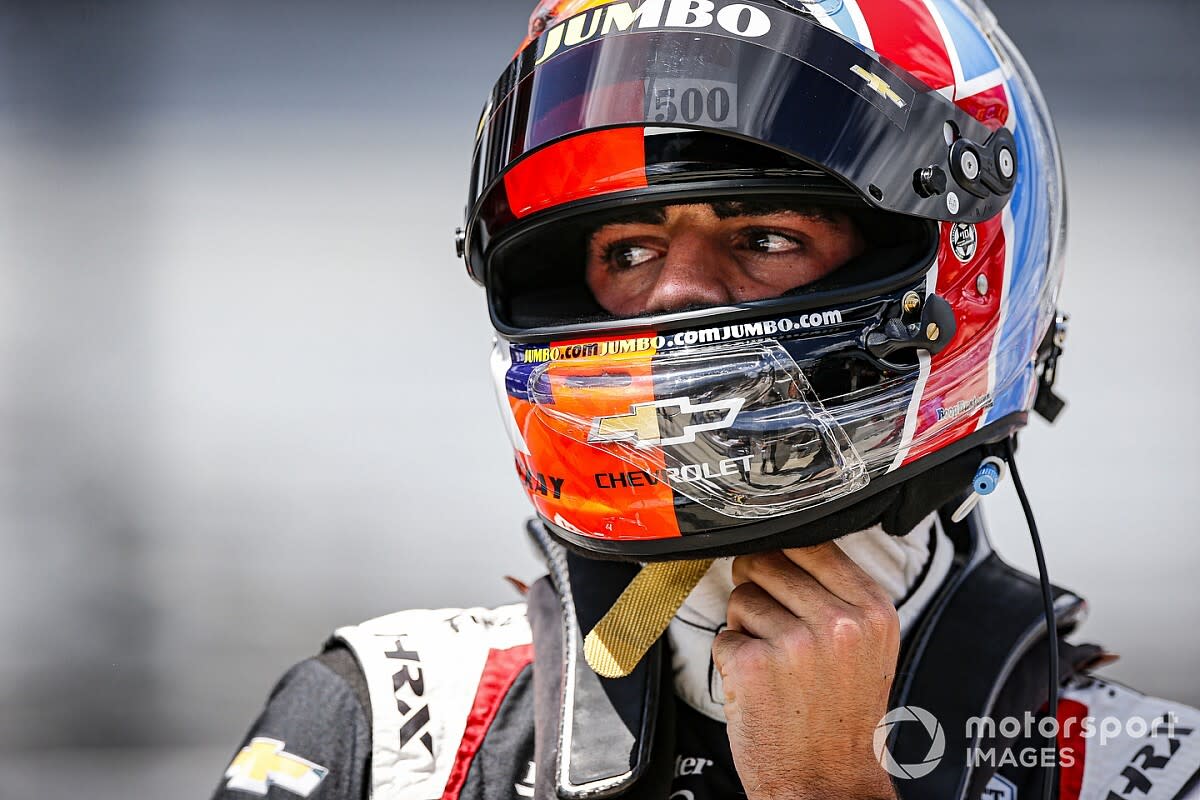