INDIANAPOLIS — This was supposed to be as ideal a season for Andretti Autosport as they’ve had in years. The year Colton Herta turned a two-win rookie campaign into being a consistent contender. The season Alexander Rossi finally got over the hump and hoisted a title. A legitimate opportunity for James Hinchcliffe to contend for an Indy 500 title as a part-time driver.

But for Andretti Autosport, in so many ways, 2020 hasn’t met expectations. From flying cars, to spinning out in the pits, unexplained fires, fuel pressure issues and multiple cars that wouldn’t fire on the grid of the season-opener – you name it, the six-car effort has probably dealt with it.

Entering the 104th running of the Indianapolis 500, Andretti Autosport is the only one of IndyCar’s Big Three teams that finds itself winless. Chip Ganassi Racing and Team Penske, which combine for six full-time cars, have together swept the six-race slate. They also combine for the top three spots in the championship standings, four of the top five and six of the top nine, while Andretti’s Herta is seventh, the only team member in the top 10.

“It’s definitely been a little uncharacteristic,” said Hinchcliffe, who spent the first two races of the year in the cockpit for Andretti before spending four races in the pits and the booth for NBC Sports. “The cars haven’t had the pace we’ve wanted, and in a lot of races, we’ve had some technical issues, and that’s something we’re not used to seeing out of this organization.”

You wouldn’t have known it watching the opening day of on-track action for the 500 Wednesday at the Indianapolis Motor Speedway. As teams balanced rookie orientation programs, veteran refreshers and the general chaos of having one less day of practice on the track ahead of this year’s 500, Andretti Autosport’s speed out the gate was blatantly obvious. In traffic, where they posted three of the top four fastest laps (and four of the top seven when including their technical alliance with Meyer Shank Racing driver Jack Harvey), 2016 500 pole-sitter James Hinchcliffe (224.526 mph) paced the team and the entire field.

And when the cars were strewn across the 2.5-mile oval in solo runs, the five fastest cars in terms of no-tow speed had Andretti Autosport fingerprints on them, paced by Rossi (221.952 mph). Keep in mind, that’s without the benefit of a full night’s debrief with nearly 20% of the field’s drivers and engineers.

In theory, that was supposed to be Andretti’s biggest asset in 2020. A team that for years has been unafraid of the chaos that could stem from running four, five or even six cars in IndyCar, this year’s team makeup should have just bolstered their toolbox.

But, as Hinchcliffe explained, that advantage disappeared with the addition of one-day shows and doubleheader weekends that have almost entirely made up the revamped 2020 IndyCar schedule.

“With all these truncated schedules, in theory, it should benefit a team with more cars, but the problem is the time in between your sessions also goes down, so you don’t have time to go through the data from all the different cars,” he said. “You really can’t take advantage of that element, and you end up being six one-car teams.”

So when they’ve struggled, there hasn’t been time to rebound. And in their rare successes – including Rossi’s lone podium for the team in the second race at Road America – it’s come in race action at the end of the weekend, rather than in practice where they could have a better chance to multiply the setup across the cars.

Andretti Autosport driver Alexander Rossi (27) pulls his mask up over his nose and mouth after exiting his car after the first day of practice for the 104th Indianapolis 500 at Indianapolis Motor Speedway on Wednesday, Aug. 12, 2020.  (Photo: Mykal McEldowney/IndyStar)

Despite the storyline of a condensed Indy 500 schedule, the calendar across the next week-and-a-half is almost a blessing of riches. Instead of an hour of practice – or at most, two – they have more than 20, plus qualifying. And with that, Day 1 pace becomes seemingly less important; Team Penske had the two fastest drivers the first day of practice the last two 500s, and with it, Roger Penske’s 17th and 18th Borg Warner trophies.

“Every time you come to IMS and that first day of practice, it’s so nerve wracking because, quite honestly, 98% of the car’s speed, that raw pace, is determined before you ever turn a lap. It’s all about how the car’s put together,” Hinchcliffe said. “Already, it’s a huge testament to the work of everyone at Andretti Autosport, and it’s nice to have the Genesys buggy up front. It’s a nice way to start the week off.”

Now, as days 2, 3 and 4 come, the real work begins. Now, IndyCar fans, as well as Andretti Autosport’s competitors and the team itself get to see what it is made of. Hinchcliffe explained Wednesday that his car alone on opening day accomplished close to a full team’s worth of pre-race prep, in terms of experimenting with setups and running through different on-track strategies. Multiply that by six or seven over three full days of practice, plus Carb Day, and they might have something.

But with more time comes the chance to use it the wrong way, and it’s far easier for that to happen with more cooks in the kitchen than any other team preparing for the Greatest Spectacle in Racing in the midst of a pandemic.

“I don’t know if it’s an advantage or a disadvantage,” said 2006 Indy 500 runner-up Marco Andretti. “There’s pluses and minuses to it. It’s tough, cause if you find one (good) damper, then you have to produce seven and stuff like that, so it’s a lot of work for guys to keep up with. A lot of housekeeping items. Our meeting will probably go until 9 p.m. every night. There’s a lot to learn.

“For guys like myself, I almost wish it was a one-day event sometimes, because we roll off so strong every year on opening day. We’ve been the quickest more often that not, I think, or at least up there.”

Andretti went on to say that, despite one top-10 finish this year and just two finishes inside the top-18, he doesn’t come into his 15th Indy 500 feeling discouraged. Besides the fact that the IMS oval has often brings out the best in the veteran driver, with eight top-10s to his name, his on track issues in 2020 have rarely been his own doing.

And seeing his car already in good shape as we near Fast Friday, qualifications and the green flag, it’s just another reason for Andretti to exude confidence during a season that would suggest otherwise.

“Five out of these six races have been out of my control. Where we’re at has nothing to do with our pace,” he said. “This (race) is a championship in itself. It’s almost like a big reset button, so we’re lucky for that.”

Now, he said, it’s about using their tools to their advantage and finding a way to stay in their opening day groove.

“I need more days like this,” he said. “It’s not just the speed, but the way the car felt, when you’re really putting yourself in tough situations, which is the way the race is going to be. You want to get comfortable with being uncomfortable. Today, I was really more focused on the race car and trying to bury myself in traffic on older tires. We didn’t focus on a fast time, so it was nice that materialized.”

Thu Aug 13 , 2020
Leading MotoGP riders have expressed concern about riding in the wet during this weekend’s Austrian Grand Prix at Red Bull Ring, with forecasts predicting thunderstorms. This weekend marks the first of two races to be held at the Red Bull Ring, with MotoGP returning next week for the Styrian GP. […] 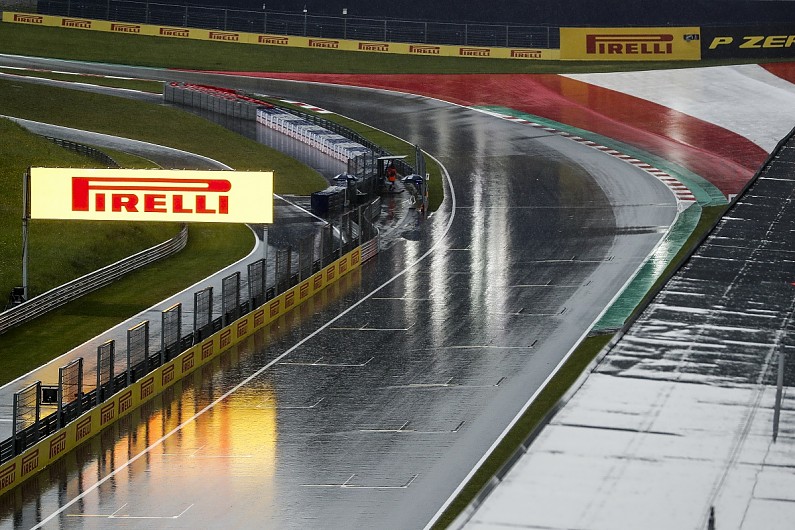