INDIANAPOLIS – Though he didn’t make the Fast Nine in Indy 500 qualifying, Zach Veach was eager to talk about his Andretti Autosport teammates.

If only he could remember all of them.

“We had a shot if things went the right way, but I’m glad it did for James, Marco, Ryan and …,” Veach said, pausing with a furrowed brow as he tried to recall the team’s fourth Dallara-Honda that had a shot at the pole position. “And … and.

“And Alex! Sorry! We’ve got so many cars, it’s hard to remember everyone.”

With five full-time cars — plus an extra Indy 500 entry for James Hinchcliffe — Veach can be forgiven.

Even for an Andretti Autosport driver, it’s easy to overlook a teammate – though the past week at Indianapolis Motor Speedway has marked the first time this season that seemingly all of the team’s cars are standouts.


Marco Andretti’s pole position for the 104th Indianapolis 500 was only the beginning for Andretti, which also has Ryan Hunter-Reay, Hinchcliffe and Alexander Rossi in the first three rows.

In his first season as a full-fledged Andretti Autosport driver, Colton Herta is lurking (having just missed the Fast Nine by qualilfying 10th), and Veach will start a career-best 17th at the Brickyard.

Throw in Jack Harvey, whose Meyer Shank Racing car has a technical alliance Andretti Autosport, and more than 20% of the 33-car field can be traced to a single organization that seems to be finding its stride after being winless since adding a fifth car to start this season.

“We have a tremendous team,” team owner Michael Andretti said. “We have great depth and talent. We have great systems down. One of the challenges that we’ve had in the past is trying to make all the cars equal. We’ve done a pretty good job this year.

“They’re as close together as they’ve ever been. That goes to the engineering group and also our management had really done a great job in putting the cars together exactly the same.”

© Provided by NBC Sports
NTT IndyCar Series car owner Michael Andretti watches from the pits during qualifications for the 104th Running of the Indianapolis 500 at the Indianapolis Motor Speedway (Brian Spurlock/USA TODAY Sports).


The other key is having the data from at least a half-dozen cars to pore over from every practice and race. Truncated race weekend schedules at Texas, Road America and Iowa because of the novel coronavirus (COVID-19) pandemic blunted the effectiveness of Andretti’s strength in numbers approach as there wasn’t enough time to digest the information and apply the lessons.

Track time at the Brickyard also has been limited, but having a full three days of practice allowed for the driver debriefs and engineering meetings that weren’t possible earlier in the year.

Hinchcliffe, who is back in a three-race stint after racing full time for Andretti from 2012-14, plunged into meeting much of his team for the first time in the June 6 season opener at Texas Motor Speedway. Before being scuttled by COVID, the plan had been to learn the team during the season’s first three months.

“It would have been an opportunity to spend some more time at the shop and get to know my guys specifically and kind of see how and where I fit in,” he said. “With the way it all happened, I was meeting some of these people in Texas for the first time. Definitely made it more of a challenge. I took a fly on the wall approach to start to see how things worked here, and I’m super impressed.

“I’ve been in two- and three-car teams that couldn’t get through a debrief quite as efficiently as these guys are doing it with seven. I don’t feel like information is lost or any wires get crossed or anything like that. They’ve really got it down to a science.”

© Provided by NBC Sports
Marco Andretti will be the first member of his famous racing family to start on the pole position in 33 years (Chris Owens/IndyCar).


Its success is rooted in knowing how to be discriminating in sifting through so many perspectives.

“You learn as a group what are the important things to hit and what are the things that you can pass over,” Hinchcliffe said, noting that engineers always can dig through another car’s data later. “It’s bullet points. Get on the big hitters positive and negative and just be cognizant of the fact we need to get through six or seven cars’ worth of information in a relatively timely manner, and it works.

“Information isn’t getting lost, things aren’t falling through the cracks. The cars are all running very competitively here, and it’s great to see.”

Veach said the Indy week is important because “you start learning the guys you’re working with and learning how to take their feedback. Someone like Alex says the car is loose, you can bet it’s probably too loose for you because he likes a really free car. It’s just understanding and interpreting what your teammates are saying. As you get more familiar with each other, it just allows it to be a much better fit.”

It can take some time to reach that point, though, as Marco Andretti joked last week about team meeting “that will probably go until 9 p.m. every night. … There’s always stuff to learn off the other cars. The way we shorten (the meetings) is, ‘Say what your good changes were.’ We sit down and can see if we want to implement it to our package or not.”

Still, it also is difficult for the team to adapt quickly, particularly under COVID-19 restrictions that have led to odd hours and triple shifts at the team’s shop. “It’s tough when we find one damper, we have to produce seven,” Marco said. “It’s a lot of work for the guys to keep up with, a lot of housekeeping items. But we’re working through it.”


Results were mixed in the first six races. Rossi has Andretti’s lone podium finish (a third in the second race at Road America), and the team has struggled through mechanical glitches, driver errors and a lack of pace relative to Team Penske and Chip Ganassi Racing (and Arrow McLaren SP at times).

Though Indy has been encouraging, Andretti annually excels at the 2.5-mile oval, and the Aug. 29-30 doubleheader race weekend at World Wide Technology Raceway at Gateway could be a more important barometer. An Andretti driver has yet to win at the 1.25-mile oval near St. Louis.


“Indy is very independent of every other race for a lot of different reasons,” Rossi said. “I think some of our struggles this year won’t necessarily show up at Indianapolis. I think this team’s always been incredibly strong here regardless of the circumstances.

“I think it’s awesome in terms of motivation for all of us. We need to make sure that we use that and make sure an Andretti car wins the race for sure. But then it’s immediately to Gateway and we still have our own issues and stuff to resolve. Just because we have hopefully a good month of August here at Indy doesn’t necessarily mean everything is going to be perfect for St. Louis.”

Said Herta: “We definitely haven’t been the best team at any of the races so far, so it’s nice to see that change (at Indy). But this place is so different to everywhere else that we’ve gone that I couldn’t really say that we’re fast here, so we’re going to be good at a lot of other places. We still need to work on our road course car. Our short oval car was OK. I think Penske and Ganassi are still just that little bit above us, but we’re very close.

“We’re making finds every week with the dampers and stuff on the car. (Indy) is promising, and I hope that going into Gateway that we can show that we made that leap forward after being second fiddle or third fiddle at Iowa.”

Thu Aug 20 , 2020
Haas Formula 1 team drivers Romain Grosjean and Kevin Magnussen have welcomed the FIA’s planned review of formation lap radio restrictions. Both drivers were docked 10 seconds at the Hungarian Grand Prix after they discussed a change to slick tyres with their respective engineers, before pitting at the end of […] 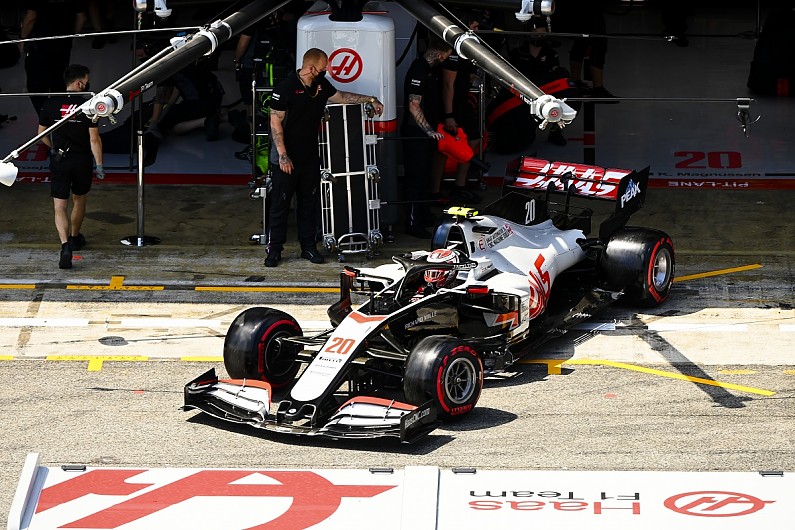